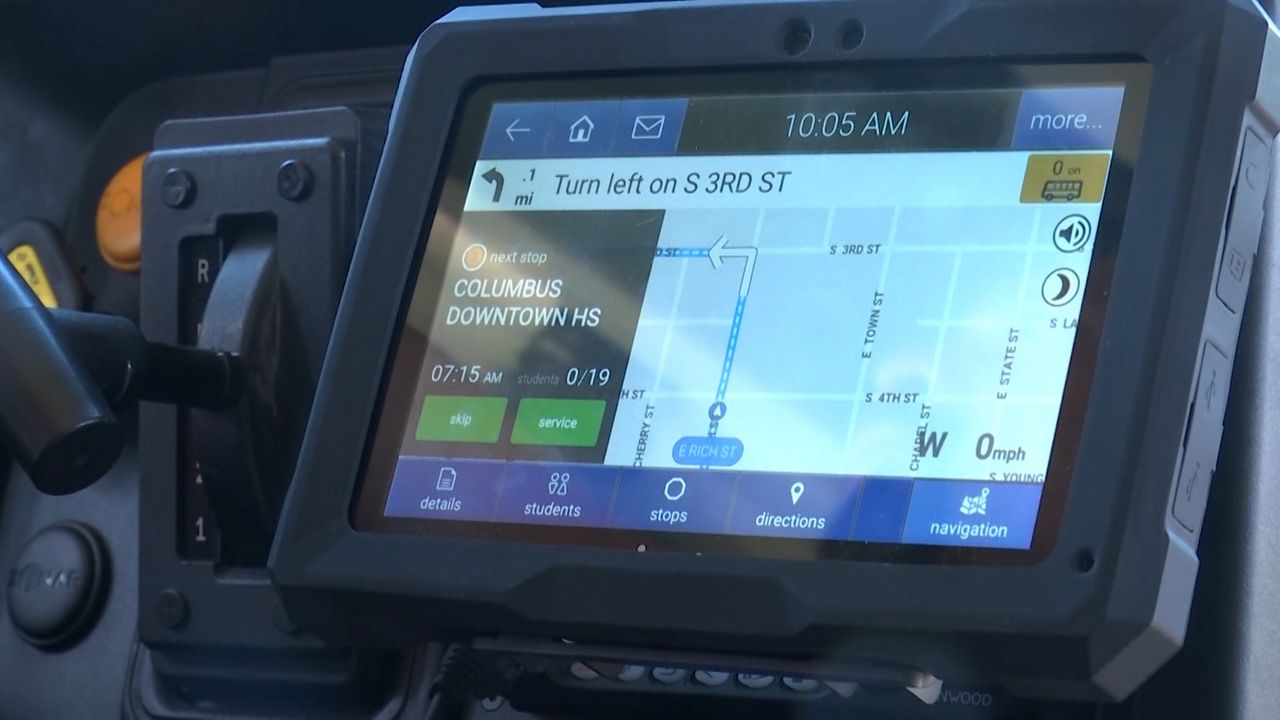 COLUMBUS, Ohio – School for many students starts in just a few weeks, and most parents are getting ready with backpacks and school supplies.

Columbus City Schools is preparing too by introducing smart technology that will make getting to school a little easier and safer.

Columbus City Schools is outfitting about 780 of their buses with new technology. The idea is to help bus drivers better identify their routes, boost their on-time performance rates, and to keep students safe.

In less than a month, Columbus City School bus drivers will begin picking up and dropping off over 40,000 kids at school each day. This year, they'll be doing it with the help of the Smart Drive navigation system displayed on a tablet. That tablet will have all of the driver's routes programmed.

Executive Director of Transportation, Steven McElroy, says "the turn by turn system gives our drivers audible and visual directions when they drive their routes." As they're driving, it'll show where the next stop is and how many kids should be getting on their bus.

For parents who have those first day jitters, you might be able to relax a little because now when students get on the bus, McElroy says "you're introducing your card to the system which will track the child entering and exiting the bus." Once a kid swipes their card, the driver will see the child's picture and information on the screen. He adds that this new technology is just one way the district says it's helping to keep students safe. "We're helping students get on the right bus, get off at the right stop, and if for some reason, a child is misplaced, it will help us to identify the last location that the child exited the bus."

With over 700 routes run each day, they're also hoping the smart drive system will help drivers get kids to school on time at a higher rate this year. "This system is something that we identify that can definitely help us reach 95 percent on-time performance, allow us to manage the location of our students, and also to help our drivers get to and from their stops in a more efficient and effective manner."

While district officials know technology doesn't always function correctly, they say drivers will have a backup system just in case the system fails.

"The district ran a pilot with summer schools already. But when September comes, Columbus City Schools will provide students with what they call success cards in 10 of its' elementary, middle and high schools. Those cards will give students access to get on and off their bus. Then throughout the year, other schools will be phased in, so that students across the entire district will have the ID cards to ride the bus as well."

The district received a one million dollar grant to purchase the smart technology equipment.  The district purchased the software from Tyler Technologies who sell it under the bran name Tyler Drive.  In the future, the cards will also double as a library card for students. CCS joins other schools across the nation, including Youngstown City Schools who are also using the technology.