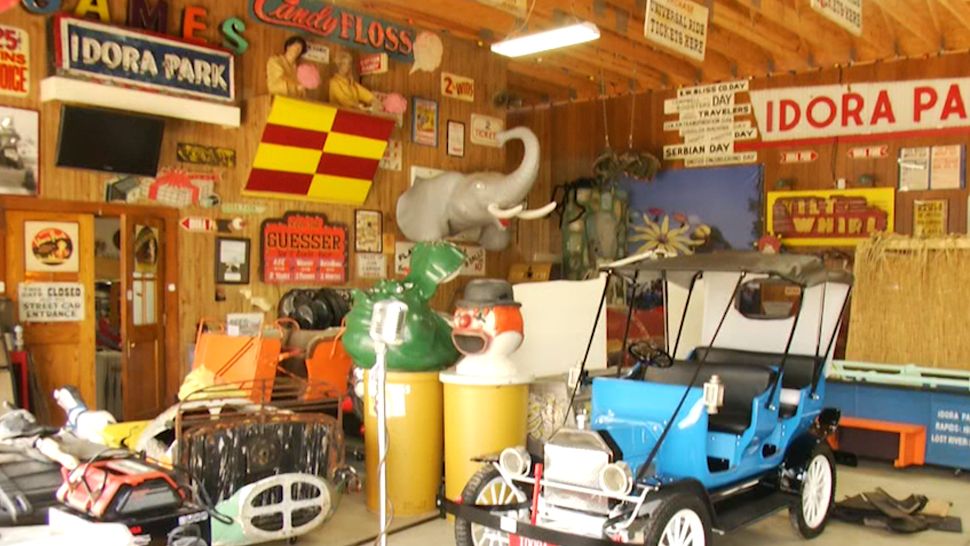 Years later in 1984, while in the Air Force stationed in England, he was shaken by the news that a fire tore through his beloved park that had been a source of such joy for generations.

Amey returned to Youngstown with his wife Toni in 1993 to search for a memento. What he found was a park in ruins.

“The booth where I worked in 1976 was the football throw, was this light fixture, a porcelain light fixture that was just hanging by one screw. I said, I don't care what you say, I'm taking that,” said Jim Amey.

In the years that followed, the two scoured the country in search for, restoring and displaying small items.

And when the internet exploded on the scene, the Ameys expanded their search for big-ticket items.

“He came up to me and said I want something big from Idora. And I thought ok, define big? He said well I want a coaster car like a jackrabbit or wildcat car, one of the rockets, something like that. One day he came home with all of the above. What actually started out is I'd like to have one item that's iconic that I can point to and say that's from my childhood, that's from my hometown, that's from Idora Park—became a rescue mission,” said Toni Amey.

Fast forward to 2014, The Amey's built a structure in their backyard to house their collection.

They had coaster cars from the Wildcat and the Jackrabbit, original signs, along with several arcade games.

They started a Facebook page, which currently has 17,000 followers.

Word soon spread across the Mahoning Valley, and thousands of people have visited their museum during open houses they host twice a year.

'They'd wanted to know what we had gotten lately. They'd want to see what we had in the collection and it just kind of became this talking thing. And what we saw was people were emotional about it,” said Toni Amey.

Over the last year, the Amey's gathered dozens of old photos and patron accounts and recently finished their first book, “Lost Idora Park.”

“We thought you know, it's an important story to tell and we're probably the only ones who can tell it in this way, from the viewpoint of the people who loved Idora Park,” said Toni Amey.

Although they plan to host another open house sometime in the fall, the book will be on the shelves next month.

The Amey's, say they continue to collect memorabilia and they're proud of the fact that they're spending their retirement years bringing joy to those of all ages.

“Everything is saveable, and we would do it over again. It's like its something that has to be done, it's supposed to have been done, maybe a long time ago. It's like that's our mission, it's what we're supposed to do in this life,” said Jim Amey.