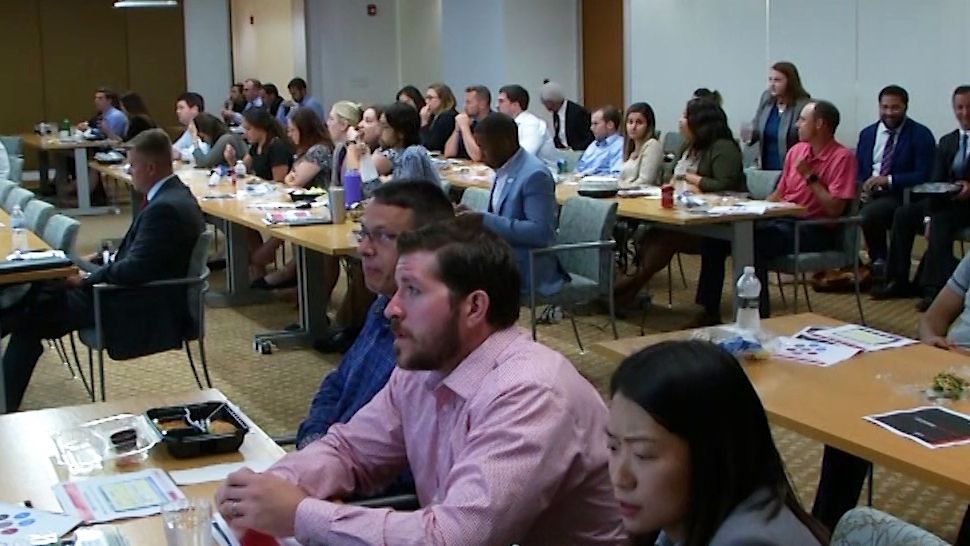 COLUMBUS, Ohio—Karim Ali says when he started his law career, he had worries.

“I came here as a law clerk as a first year law student, in 2001, and I was terrified of coming here and someone outing me.”

But now his experience is much different.

Ali leads diversity and inclusion initiatives at Porter Wright, a full-service law firm based in Columbus, with offices around the country.

“I'm now the partner-in-charge of professional personnel, the first African American, the first gay person to be in this role, and for me that's a personal victory,” said Ali.

Managing partner Robert Tannous says that he wanted someone who could bring unique insight to the firm on how to improve representation among attorneys and staff, as well as retention.

“It's one of those things that you really do have to task someone to take on that role and lead the effort, and make sure that role is a part of everything we do as an organization,” said Tannous. “And Karim has done an excellent job in being able to do that.”

Porter Wright has around 400 staff in its offices.

Like many companies, it has affinity groups to promote engagement on diversity and inclusion topics – one focused on women, one on racial and ethnic minorities, and one on LGBTQ people.

“A lot of firms over the years have looked at diversity as a numbers issue, and we feel you have to get beyond the numbers… the inclusion piece is essential,” said Tannous.

The groups help bring people together with shared experiences for networking and mentorship, but also allow for others to learn about the specific issues some people face in the workplace.

“I believe there is great value in helping to develop underrepresented groups, and affinity groups are one of the ways that law firms or other enterprises do a great job of trying to address that representation,” said Ali.

Porter Wright has also pledged to follow a new measure of diversity in law firms called the Mansfield Rule – developed by the Diversity Lab, an organization developing ideas that diversify law firms.

The standard challenges law firms to consider 30% minority candidates— including women, people with disabilities, ethnic or racial minorities, and LGBTQ people— for hiring.

“What we hope to do is continue to learn from what other organizations have been able to gain from the experience,” said Ali.

Ali says they've already seen the results of their efforts, both in hiring and inclusion.

This year they held a Pride celebration for the month, and Ali was impressed by the participation.

Messages of inclusion that help bring in more diverse associates, but also clients.

“I think there is great value, and there is a lot of data that supports having diverse teams,” said Ali. “Diverse people helping to make good decisions for the clients and for the firm.”

A 2018 report from the National Association of Law Placement reflects the importance of these initiatives in law firms.

Women, minorities, LGBTQ people and people with disabilities are heavily underrepresented in law firms nationally, and even more so at the partner level, according to their data.

Overall about 2 percent of partners are black or African American, but Asian and Hispanic representation is growing.

And the report calls representation of people with disabilities of any race or gender “scant at the associate and partner levels.”

But Ali says the numbers don't reflect a lack of qualified diverse candidates.

“I don't think there is a dearth of talent, I think we just have to be creative,” said Ali.

Ali wants to make sure that at Porter Wright diversity and inclusion goes beyond celebration months like Pride, and extends to how employees and clients are treated and valued.

“We are continuing the conversation… I think you have to do that. If you don't, then it becomes more just a slogan,” said Ali.

And being himself, every day of the year.