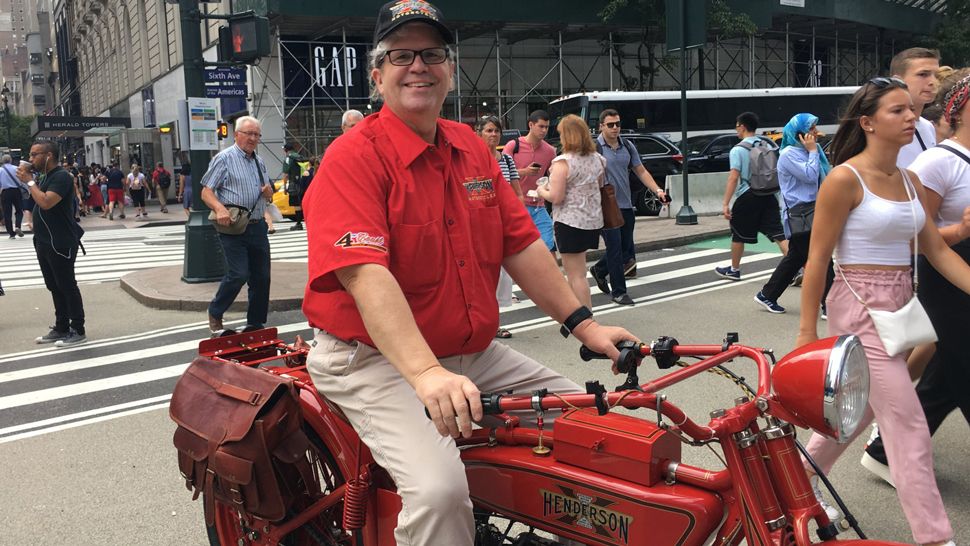 Across America by Motorcycle

YELLOW SPRINGS, Ohio – 62-year-old Yellow Springs resident Mark Hunnibell has thought about, and meticulously planned for his trip across America for the last decade.

Forty-one years ago he was given this 1919 Henderson Model Z-2 by his father as a restoration project.

Fast forward to 2000, while researching the motorcycle, the Air Force Veteran and retired American Airlines captain came upon a book about the trip of a lifetime across America by a man named CK Shepherd.

Shepherd, a British Air Force Captain, and World War I veteran had accomplished that feat on the very same Model Henderson Z-2 Motorcycle—in some primitive conditions.

“The upside is there was no traffic. The downside is there are 95-percent dirt roads. Most of it is kind of interesting stories and vignettes of things that happened to him along the way, which I had to go back and reverse engineer," says Hunnibell.

Over the last two years, Hunnibell has visited Shepherd's decedents and in his 2017 trip to England, he was given this good luck memento.

“As I was leaving, he said wait a sec, wait a sec. He went back into the house and brought this compass out. And he said take this with you and give it back to me when you get to California. And so he is going to actually meet us at the Grand Canyon and he's going to meet us at San Francisco,” says Hunnibell.

Hunnibell is followed close behind by Loring Hill, who helped build the four-cylinder engine and maintains the bike along the journey.

“I'm a Henderson fanatic, and I have a lot of time in the engine and stuff like that. I wanted to be here and see it. The CK Henderson story is amazing, really inspiring,” says Hill.

Overall, Hunnibell will travel 4,500 miles, as did Shepherd, crossing 16 states with the goal of meeting his family and friends at the finish line in San Francisco on August 6th.

He plans to document his journey with a book titled, Chasing Charles, Across America by Motor-Cycle II.

He hopes it's the proper tribute to a man who has meant so much to him for decades.

“I've purposely ridden on all these secondary roads the best I can to track where CK Shepherd rode on. The overarching goal is to experience as much as I can of America as I cross, cause I think that ultimately, that's what CK Shepherd was doing,” says Hunnibell.