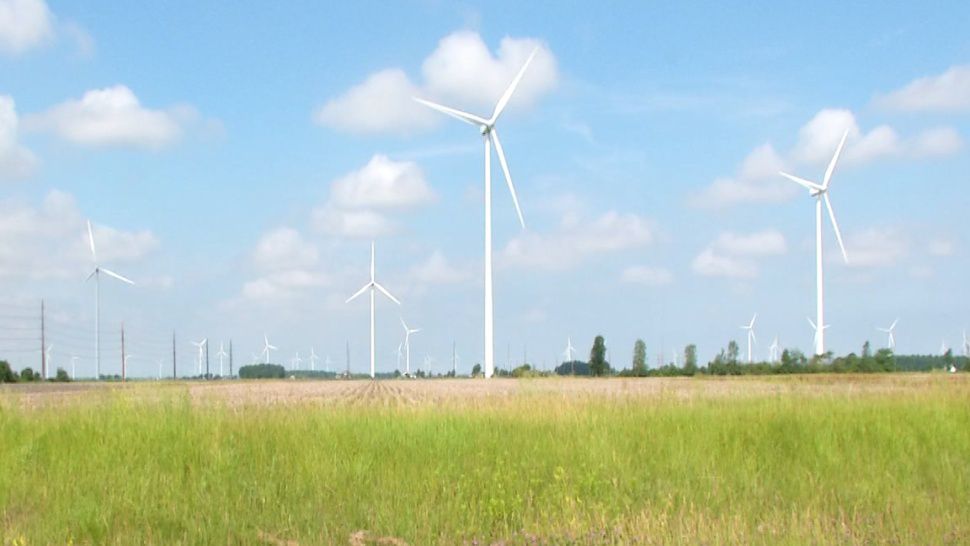 PAULDING, Ohio – It's one of the smallest counties by population in Ohio.

The mostly rural farmland of Paulding County is home to around 20,000 people. Paulding, the county seat, has just 3,500 people.

But dotting the landscape are 188 wind turbines, and 31 more are on the way. The giant fan-like structures are as much a part of the land as the Maumee River.

And wind energy has been a gold mine for the county.

Every year, through pilot payments from the wind companies the county gets roughly $2.5 million. And when those 31 additional wind turbines come online, the total payments to the county approach $4.5 million.

“It's been a really really great opportunity for us and our community financially and it really has helped our economy here in Paulding County.”

Hold on, there's more money to talk about.

That's billion with a B. A county of 20,000 people with 85 percent of its land used for farming, according to statistics by the Ohio Office of Research. The median household income is $49,866 and the median home value is $92,500.

“And that will continue to move up too as we get the tax payments for these next two lease payments coming in.”

There are 188 turbines. Let's assume one turbine went to one landowner each (it's likely some landowners have multiple turbines on their property.) 188 turbines and $6 million could mean one person in Paulding County, on average, collects a check each year for roughly $31,914 – assuming everyone is paid the same.

The $1 billion in capital investment includes both existing businesses and the wind farms, which now total three.

Lafarge Holcim, a cement maker in Paulding County, has benefited from a good economy, but also supplying concrete for the base of the wind turbines. (Ohio law requires energy companies to spend a certain amount of money locally when building out projects.) The company built a new facility and upgraded existing operations to increase its ability to meet cement demand.

Zielke explains other businesses have expanded like nursing homes and restaurants have opened.

But perhaps the biggest benefactor to the additional revenue in Paulding county are its three school districts: Paulding, Antwerp, and Wayne Trace.

“The return on the investment that we've seen is our most recent report card, our GAP closing – which is getting those lower students to achieve at higher levels, improved from an 'F' to an 'A,' Winans said.

Wayne Trace has hired the teachers to work as intervention specialist, but Winans said the district is using the approach of placing the teachers in existing classrooms, opposed to one-on-one learning. The district is saving money in case the wind farm payments go away in the future, but Wayne Trace is also using money that would have been used on teachers or staff for other things.

“We've been able to use some of the monies that we would have maybe used on staffing, if that make sense, to improve our campuses or maintain our campuses.”

Last year, wind farm money allowed for $120,000 in scholarships across the three districts.

Manufacturing remains strong in Paulding County. Zielke said companies are adding about 200 jobs per year. Unemployment in the county is among the lower in Ohio, at 3.1 percent.

One problem the county is facing is a lack of population. Zielke said that's largely due to a lack of housing.

“We've had a discussion with the commissioners and my board and some other groups that we need to get the housing built,” Zielke said.

The contracts for the existing wind farms are for 20 years, but Zielke believes most will be extended as the county and energy companies have a good relationship.

“So it's not like its going to come to a drop off date and it'll stop. The groups that we're working with are doing a very good job of due diligence and maintaining these facilities...”

The new wind farms will likely raise Paulding County's wind turbine total to 219. It's already the largest wind energy producing county in Ohio and this will only add to it.

The county splits a lot of that $2.5 million, it's not just the schools seeing more money.

The county remains frugal with its new revenue source. Following the 2008 recession, like many local governments, county budgets were cut. The new money has allowed the county to return many of those services.

The recession forced the Paulding Courthouse to operate only 4-days per week. It's back to 5-days now.

The county also spent some money on a vision study to find out what residents would like to see in the near future. A range of ideas from improving bicycle and pedestrian mobility, fighting poverty, and increasing housing and retail options.

Even better for Paulding County is they didn't provide the energy companies any tax incentives. They only provided the wind and the land.