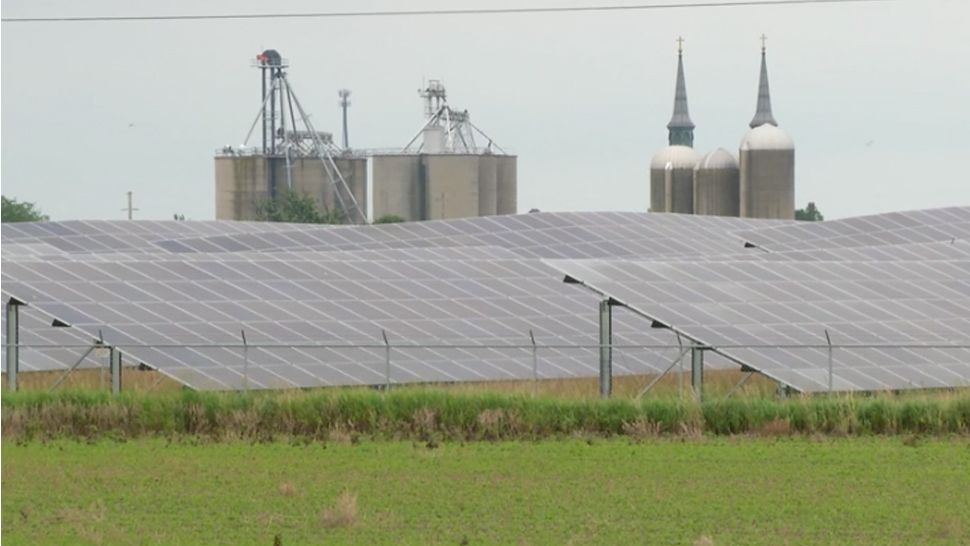 MINSTER, Ohio – In Minster, there are more solar panels than people.

Three years ago, Minster flipped the switch on its solar farm. After investing $50,000 it is already seeing savings ten-fold.

Half Moon Ventures footed the remaining costs of the project.

Minster operates its own electrical company, but buys about two-thirds of its power from outside sources like coal and nuclear. The other third is from renewable energy like wind and hyrdo.

“By having a solar field tied to our own system we're not transporting that power from someplace else to us,” explain Don Harrod, village administrator. “So we're seeing about $175,000 to $200,000 in year savings just on transmission costs.”

The solar farm is also good for business. Dannon recently added a 280,000 square foot distribution facility to its existing factory – already the largest yogurt building in the country.

Nidec-Minster is in the process of adding 25,000 square feet to its global headquarters in Minster.

Harrod said Minster's solar energy helps those businesses meet some of its own energy standards.

Those companies and its residential base are part of the reason Minster went solar to begin with.

“We are very concerned about reliability. We want our electrical system to be up and running 99.99 percent of the time.”

One reason Minster could create a microgrid is it already has a solar storage unit, one of the first in the U.S.

The stored solar energy helps offset peak demand. Instead of buying more power from outside sources, Minster can use energy it has already produced. That has also helped the village save more than $350,000.

Any savings the village accumulates from solar energy is put back into the electrical system.

The village is beginning construction on a new substation that will replace a 1970s substation.