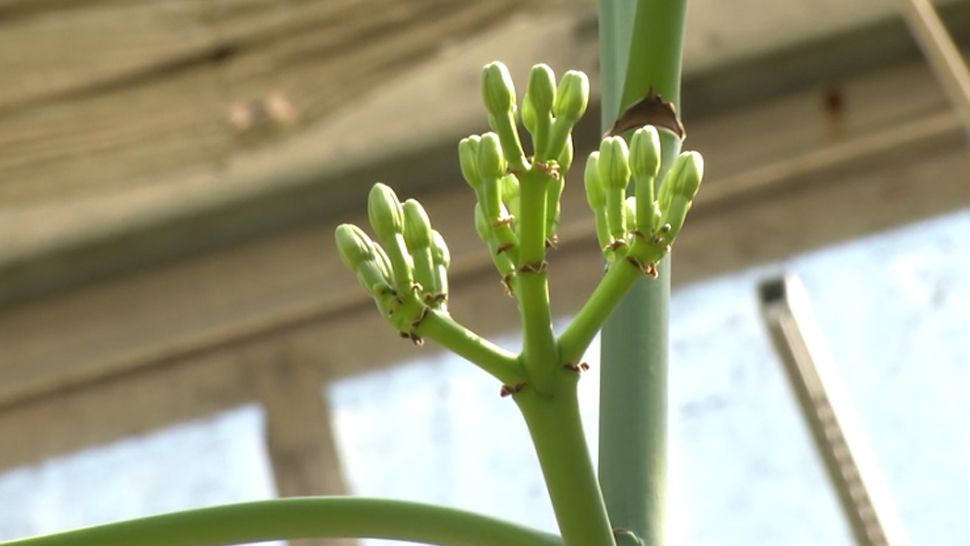 HAMILTON—It’s a once in a lifetime opportunity.

An agave at Miami University’s Hamilton Conservatory is about ready to bloom.

Something that will only happen once before it dies.

“One of the best way to ID these is by the inflorescent or flower and it has never flowered before,” said Carolyn Keiffer, professor of Botany at Miami University Regionals. “So, when the donor gave it to us they exactly sure which agave it was.”

There are 200 types of agave plants. The color of the flowers will help experts identify this one.

The monocarpic agave will provide majestic colors inside the atrium of the Conservatory.

Keiffer said the agave is likely between 30 and 50-years-old.

When it blooms, the flowers will be visible for about a month.

The plant will die in about three months but not before springing pups.

Agaves are known as “century plants” but often bloom well before reaching 100-years-old.

Soil and water have a lot to do with how quickly an agave might bloom in its life cycle.

Chelsea Obrebski is the Conservatory's interim manager. She's excited that the plant will soon bloom.

“When you see a plant, it comes, it's just this tiny little thing and you watch it throughout the years growing up and then eventually live its life cycle through,” Obresbski told Spectrum News 1. “Then generate the new generation, it's very gratifying. It's kind of like having children.”

Obrebski said the decades-old agave sprouted a stalk about a month ago. It's already towering 20 feet high and is just a few feet from the ceiling of the atrium.

Some agaves reach 30 feet in height and if this agave was outdoors it likely would, too.

Miami's Conservatory in Hamilton, 1601 University Boulevard, is free and open to the public.