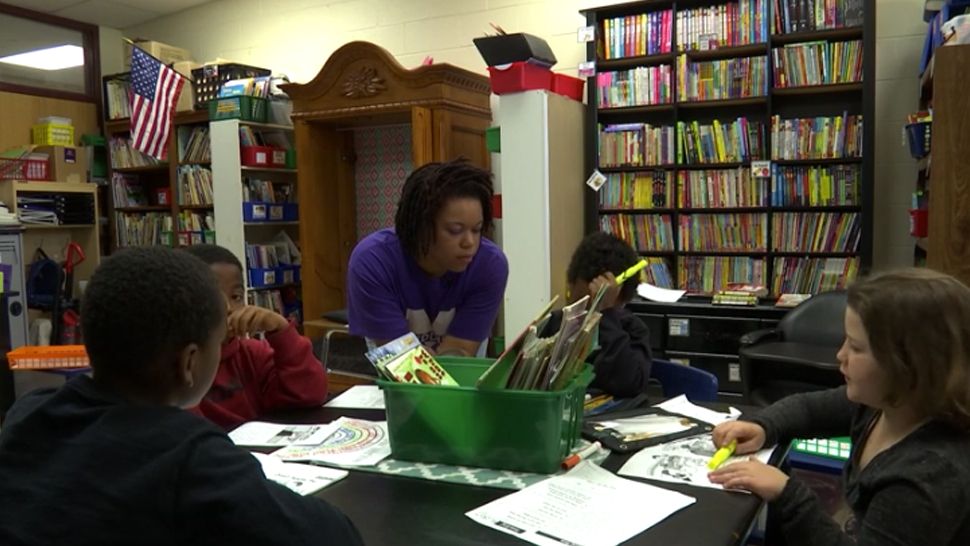 MIDDLETOWN—Special Education Teaching Assistants in one Ohio school district won't have to wait much longer to get their teaching license.

That's because Miami University and the Middletown City School District have teamed up to help them get their license through a new program.

Program participant Ayesha Winfrey always wanted to go back to school to get her Master’s degree, but she didn’t know how she would be able to do that and become a special education teacher.

"How am I gonna do that? I have kids at home, how am I gonna pay to do that? And I can’t get paid and student teach. So, like all these things were going through my mind,” said Winfrey.

She got word that all of the things standing in her way, would no longer be a challenge.

“It was just amazing. It was just a real blessing,” said Winfrey. “I still can’t describe it because it’s so exciting for me and for my family. And my kids being able to see my go back to school is just something big for me.“

"It’s a sense of relief that I’m seeing that one some of those barriers have been eliminated. Two both the district and Miami have sort of gathered around these students to say we want this to succeed," said Abbitt.

Middletown City School Human Resource Director Debbie Houser says the partnership gives Middletown natives like Winfrey a chance to stay in district while addressing many challenges teachers couldn't fix on their own.

"We had paraprofessionals that wanted to become special education teachers but there were quite a few barriers in their way to actually get that license," said Houser.

The partnership lets staff keep their full-time job, while taking one or two online classes at a time for the first year.

And then they can swap places with the teacher they currently work with to do their student teaching.

They still get paid their regular salary.

In addition, they get a 50% discount on their tuition, tuition reimbursement from the school district on the other 50% owed, and loan forgiveness for any loans they take out.

Plus, Houser says, "we have the chrome books and we have the textbooks that are provided through the grant."

It's the first time the Middletown City School District has done something like this, but teaching assistants like Ayesha Winfrey are grateful.

"It’s obviously a confidence booster and when I’m talking to the other teachers I don’t feel as left out,” said Winfrey.

Since she knows the kids and continues to work with them, she says it's easier for her to take what's she's learning in class and apply it real time.

"I know the behaviors I’m going to see. I know what the struggles are between the kids and what they need," Winfrey said. "I can take what I learn and actually do it in the classroom and just the knowledge I’m getting is…it’s great when I can come back to school and like I know what we’re talking about here. I know about this IEP."

While this is helping people like Winfrey, district officials believe it will help them in the near future to fill address the shortage of special education teachers.

For now, Winfrey takes joy in helping her students complete their work as she looks to finish her own.

The current group of classroom assistants will start their student teaching in the latter part of 2020, knowing that when they finish they'll have their own classroom.

Once the Middletown City School District works out all of the first-year details of the program, they plan to open it up to other districts like Hamilton and Talawanda. Until that time, officials say they’ll continue the program even after the grant money runs out this year.

Miami University is hoping that other districts throughout will connect with the program as well.