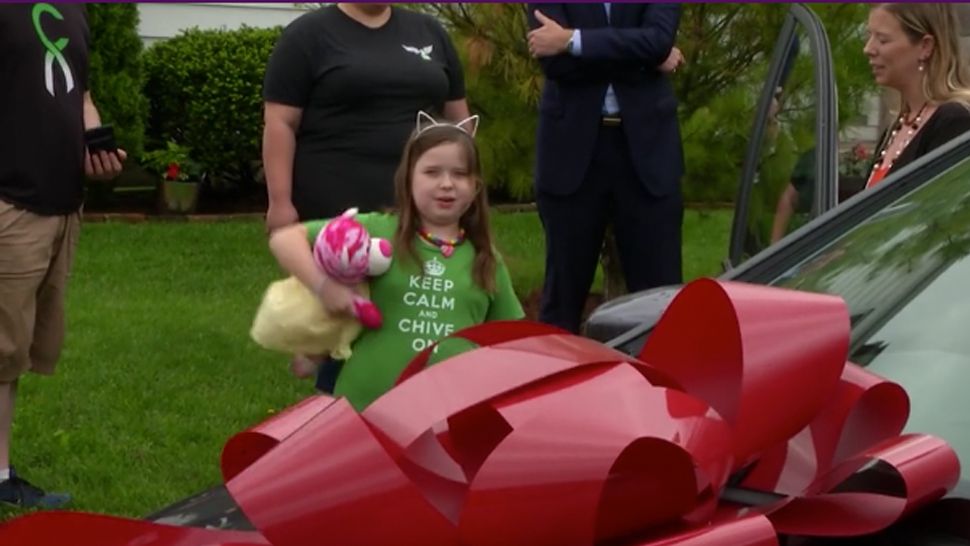 Chive Charities, Honda Dealers Help Girl with Half Her Brain

She also doesn't have half of her brain.

When Roz was 2 years old she began suffering from debilitating seizures. Five years ago, she was diagnosed with Rasmussen Encephalitis. Then doctors performed a hemispherectomy to remove parts of her brain. That damaged part of her eyesight.

Today, the seizures have stopped and a third surgery has improved her eyesight. She still has some paralysis and Roz will undergo a fourth surgery next week to remove an out-of-place tooth in her mouth.

Her parents Anne and Matt and older brother Rylen have fought alongside her.

Recently, the family had applied for some help through Chive Charities, the non-profit philanthropic arm of The Chive. Anne said she was hoping they might help with a newer vehicle, something maybe three or four years old. The family's current vehicle is 14-years-old and has a host of problems.

Roz makes regular trips to doctors in Dayton and Cincinnati for various appointments, drives that can take an hour or two.

Chive Charities decided to host one of its flash campaigns to help Roz and her family. A flash campaign is a digital fundraising event that aims to raise a certain dollar amount very quickly.

Dayton company Stratacache matched a $25,000 donation. All that money was certainly enough to get a newer vehicle.

But then the Miami Valley Honda Dealers Association caught wind of the family's need and played a trick. Thursday, the family was presented with a 2019 Honda Odyssey and was told it could be a loaner for Roz's Monday trip to Cincinnati.

But then, Dick Lange from Voss Automotive Group told Roz that the van was actually hers to keep. The MVHDA had decided early on they'd give the family a brand-new vehicle.

The family will use the $70,000 in monetary donations to make home improvements.

When Roz was diagnosed with Rasmussen Encephalitis five years ago, she was only 1 of 500 known cases in the world.