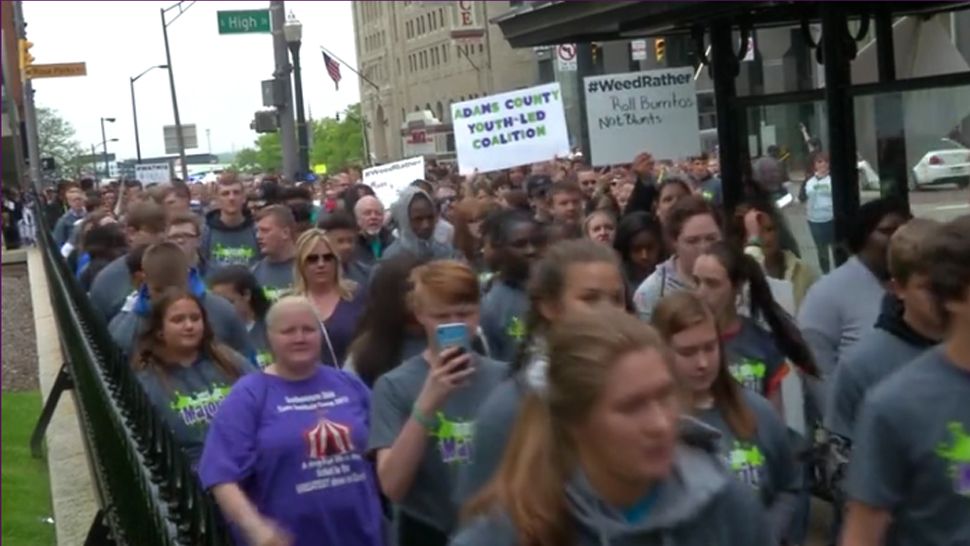 Columbus—Thousands of high school students marched on the Statehouse lawn Tuesday, taking a collective vow to lead a drug-free life.

“I just think that today is a really empowering opportunity to see all these other youth that have the same beliefs that we do,” said Taylor Boyd, high school senior.

It’s part of “We are the Majority," a group that aims to equip students with the tools to make the right choices.

Rally speaker Matthew Meade says it all comes down to building confidence.

Sophomore Morgan Maloney says the road to addiction can be paved with things that may seem harmless.

“I have a few students in my school talking about vaping and act like it’s a joke,” said Maloney. “It’s not. It's highly addictive. People may laugh at me right now and say I'm being dramatic, but people suffer through this, and through smoking.”

According to the Surgeon General, 9 out of 10 adult smokers start before the age of 18.

“I hope more people will be aware that what we’re doing is not in vain and that hopefully we’ll make a change—a huge change for everyone in Ohio, and probably across America,” said Maloney.

For others at the rally, today’s promise is stopping a problem before it starts.

“We’ve seen the harmful effects that drugs can have on your body and we don’t want to put ourselves through that,” said Hannah Edler, high school senior.

Organizers say today is a touchstone, but the real work begins when the crowds have dissipated.

“This is the fun part,” said Meade. “The rest of it is the action, and taking what they were inspired by today and putting it forward and using it as an action.”

An action that these youth hope will turn the tides for a state in crisis.