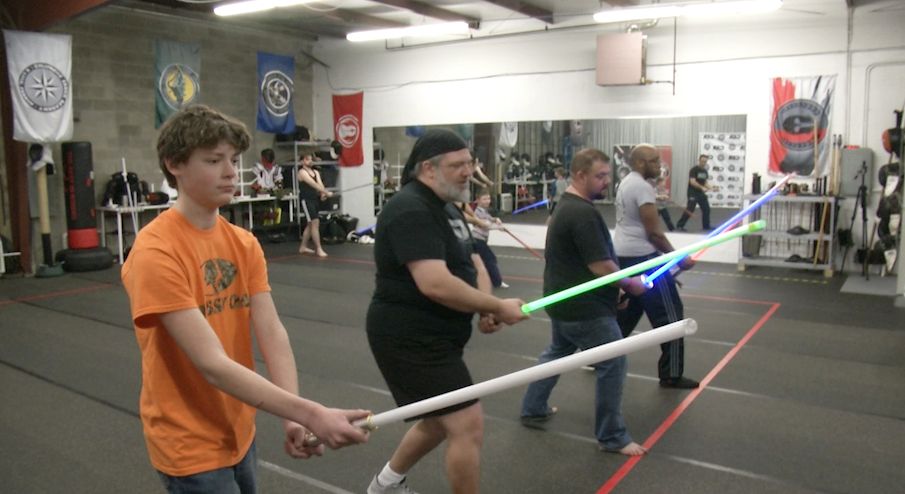 WORTHINGTON--At first glance, saber combat looks like something we've all seen before from a galaxy far, far away.

It was the vision of Columbus Saber Academy's owner Tom Amoroso, a self described “Star-Wars geek” who has spent the last 30 years i9n martial arts weapons training.

“Got together, rented a dance studio space in Westerville, and had about seven or eight of us there, practiced martial techniques with light sabers. So its not choreography, its not planned, we actually do stage combat training here but the foundation of all we do is all martial training from some sort of system throughout history,” says owner and head instructor Tom Amoroso.

The Saber Legion is a world-wide organization still in its infancy with a little over 8-thousand members.

Amoroso says saber combat isn't about speed, its about understanding your opponent and how you can set up your timing in a 25-by-25 foot ring using a hand made—13 ounce combat grade aluminum, polycarbonate tubing light saber.

“It's the equivalent of bullet proof glass type of material or billy club type of material so they're pretty indestructible. So its not just a linear attack, you have to have your wits about you. You have to be aware of your surrounding and that's kind of the key to self defense,” says Amoroso.

And Saber combat appeals to all ages.

15-year-old Centerburg resident Jacob Rumpke is one of 50 students taking part in weekly training at the Academy.

Rumpke became hooked on light saber training after watching a demonstration during the Westerville Food Truck Festival a year and a half ago.

“I wanted to do fencing for a long time and I saw that and then I was like hey, that looks cool and I want to try that. You're hitting people with light sabers, I mean, its fun,” says Rumpke.

“It is 10 points to win a match, you get a point for every touch on an opponent. It doesn't matter how much force you put behind that touch, you just have to touch them. So you get everything from feather light strikes to the absolute bone crushing ones,” says combat instructor Rocky Willis.

Willis says despite the battle scars, saber combat has improved his quality of life immensely.

“If you're like me and work a desk job, its amazing exercise. If you're like me and you're in IT and have a hard time socializing, this is a great way to make friends. I've had a blade broken on my rib. I wouldn't want to do this without some sort of safety equipment. It's absolutely worth it walking to the office on Monday and choosing the elevator over the stairs cause there's no way you're walking up them,” says Willis.

Saber combat continues to gain popularity and was recently featured nationally on ESPN and locally at the Arnold Sports Festival.

Enthusiasts say they will continue to get the word out to the community.

“Most of our competitions are at a school or at a community center, so we can kind of have the public come in, they're free of charge to the public. We just want people to see it and experience it and just kind of have some fun,” says Amoroso.