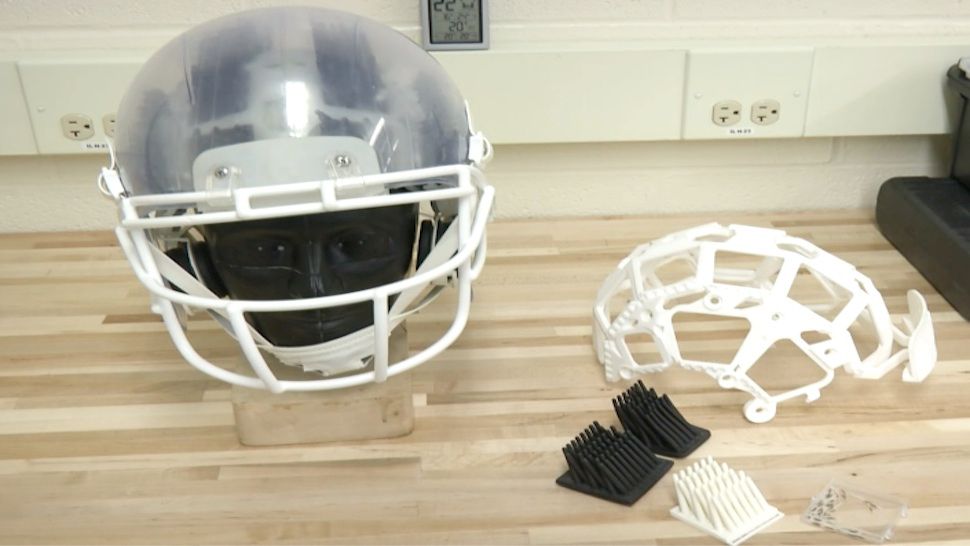 AKRON--It's no secret, the game of football is in crisis over concussions.

But researchers from the University of Akron hope their patent-pending helmet safety liner—called the "Hedgemon" is the solution.

The liner has been in development for three years by a team of four researchers at the Auburn Science and Engineering Center on the University's campus, and it's modeled off an actual hedgehog.

“Hedgehogs in the wild, they're really active climbers. They frequently climb trees and plants in search of insects and it's not unusual for them to fall. And when they do, they don't get hurt because their quills have evolved these really impressive shock absorbing qualities. So we're trying to emulate principles of the hedgehog model," said Akron PhD graduate and Hedgemon CEO Emily Kennedy.

The degenerative brain disease known as CTE, which has been linked to repeated blows to the head, is known to have affected more than 100 former NFL players.

Most helmets today protect against linear acceleration—or a direct blow to the head.

The idea behind the Hedgemon, is to protect against what’s known as angular hits—or glancing blows, with a helmet that’s lined with 3-D printed quills.

“I am confident that the NFL, the college leagues and high school leagues are at least concerned about it, aware of it and doing what they can do address it," said Hedgemon COO Nate Swift. “What we've developed here, is the ability to absorb both that rotational and that linear compression pretty well. So I would definitely trust the technology to be able to do that and provide better protection."

Kennedy says there are two key components to the Hedgemon model that make it unique.

“The way these quills are structured, internally which allows them to bend and not break, so they kind of act like springs, that's one of the things we're emulating," said Kennedy. "The second thing is, when you have a bunch of these quills packed densely together, it's the way that they interact with each other. So when one quill is sufficiently deflected, it will impinge upon the adjacent quills, and cause this dispersion of that load across many different elements, instead of localizing it."

The group has raised more than a quarter million dollars for the prototype and to file patents.

They hope to raise another million to license their technology to football helmet manufacturers.

More testing is needed, but their goal is to have Hedgemon as usable technology by 2020--and on the market by 2021.