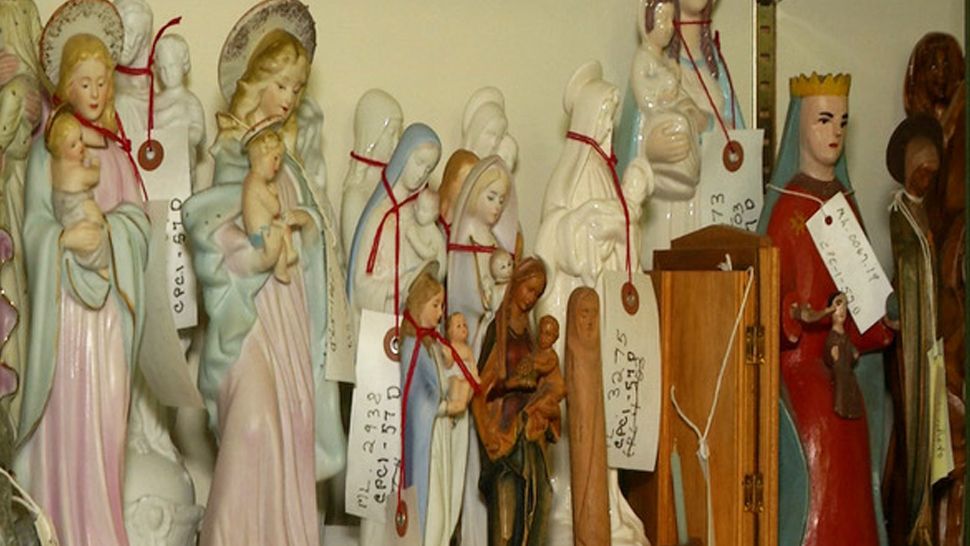 DAYTON, Ohio – The University of Dayton's Marian Library is home to one of the world's largest Virgin Mary collections.

Over the last 20 years, the 169-year-old Catholic university has acquired thousands of artifacts through gifts and donations from various individuals and organizations.

“There are other collections that have some of the same materials,” said Sarah Cahalan, director of the University of Dayton Marian Library. “But we're special because we have it all in one place so that can be very useful for researchers who visit from all around the world.”

Our exhibit, 𝑻𝒉𝒆 𝑴𝒂𝒏𝒚 𝑭𝒂𝒄𝒆𝒔 𝒐𝒇 𝒕𝒉𝒆 𝑴𝒂𝒅𝒐𝒏𝒏𝒂, opens today! This retrospective features over 80 artists from around the world whose artworks portray Mary through a variety of unique mediums and cultural lenses. It’s an exhibit you don’t want to miss! See some highlights and check out our hours here: https://udayton.edu/marian…/art-exhibits/current-exhibit.php #marianlibrary #madonnaandchild #theotokos #virginmary #catholicart

Some of the nativity scenes on display are made from various materials, including wax and cornhusk.

“There are nativity's made out of all sorts of materials that really make you nervous about their longterm preservation, but they represent a particular person's devotion and you recognize that they made the Nativity out of what was available to them at the time.”

The nativity scenes come from all over the world and depict lifestyles and cultures. The story of the Virgin Mary and the depicted Nativity is known throughout the world, regardless of religious affiliation.

“It's a story that bonds people together. And I should say that Mary, we're a Catholic Institution obviously she's of significant importance to the Catholic Church, but she does cross cultural and international and religious boundaries.”

Christmastime is popular at the library to view the Nativity scenes and Virgin Mary artifacts. A room at the Marian library only displays a small portion of what they have. Staff and volunteers rotate exhibits throughout the year.

One exhibit is a train set. The train makes stops at different scenes and an automated narrator tells a story. Part of the engineering of the train set included the help of some UD students.