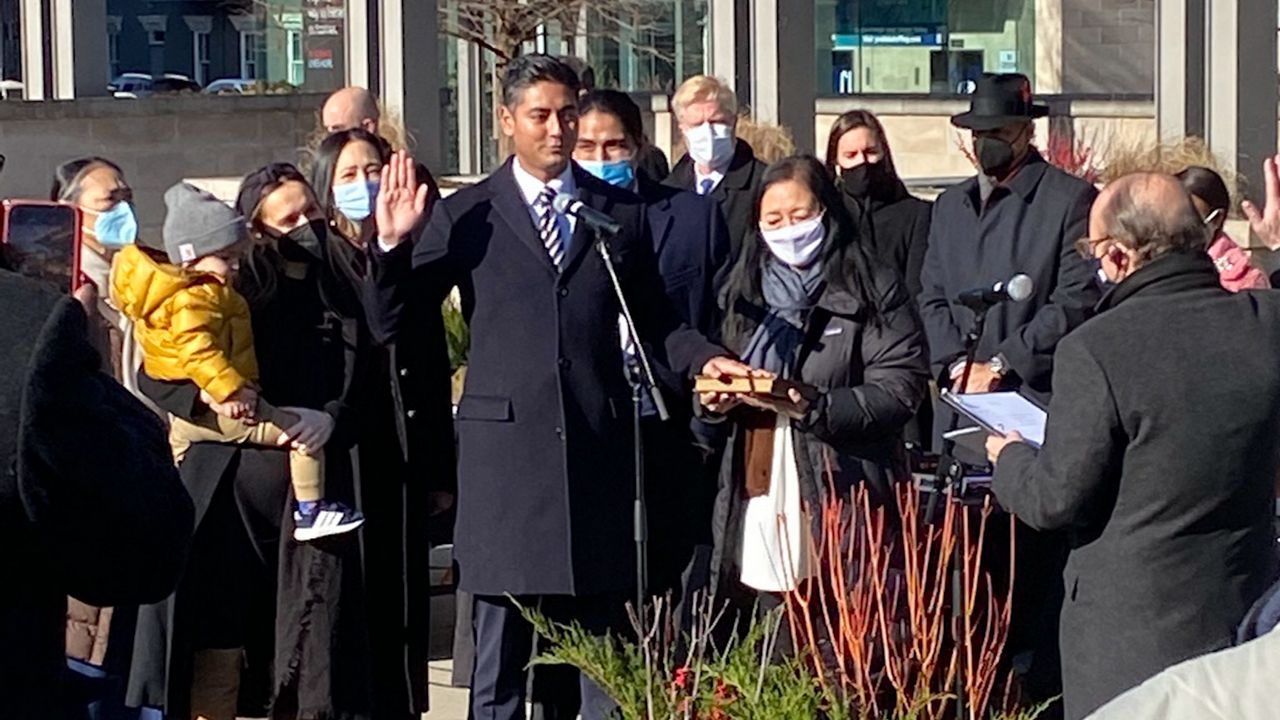 CINCINNATI — On a cold, sunny morning in Washington Park, Aftab Pureval recited the oath of office in front of his family, city officials, and hundreds of onlookers, becoming the 70th mayor of Cincinnati.

In his first speech in office, Pureval promised a new chapter in Cincinnati city government, declaring he and the new city council will hit the ground running on the issues they campaigned on, equity in city development, public safety, affordable housing and environmental sustainability.

“Now is a moment in our history when our incredible potential can be unlocked,” Pureval said.

Yet as the new mayor took office, challenges already loom over the city and his administration.

With COVID-19 cases on the rise in the city, Pureval moved his swearing-in ceremony outside of its typical venue, Music Hall, and all in attendance wore masks and had to show proof of vaccination or a negative test.

Pureval said as mayor he will continue monitoring the situation in the city and decide to adjust safety policies based on recommendations from the public health department. Still, he stressed the city cannot legislate out of this crisis.

“There’s no doubt that the pandemic has required our economy to kind of be running in place unfortunately and the best possible chance we can have to move past this pandemic is getting vaccinated, getting boosted, wearing masks, maintaining social distancing so that people can continue to feel comfortable patronizing businesses in person,” he said.

Mayor Aftab Pureval said he expects incoming interim City Manager John Curp to apply for the permanent city manager position. Pureval said he plans to conduct a national search for the and the final selection will be “community led.”

City Manager Paula Boggs-Muething will step down on Jan. 19, with City Solicitor John Curp taking her place in the interim as the new mayor and council conduct a national search for a permanent replacement.

At the same time, Cincinnati Police Chief Eliot Isaac announced he would retire in the first quarter of 2022, so Pureval’s administration will be conducting another search to fill his shoes.

“Those two searches will run concurrently to ensure we have a seamless transition not only at city manager but also in our police department,” Pureval said.

The position is made all the more urgent as Pureval promises more citizen police collaboration and safer neighborhoods. Though not the record year the city saw in 2020, Cincinnati Police statistics show violent crime was still much higher than in previous years.

“What is incredibly important particularly as it relates to the Cincinnati police department is steady leadership,” he said.

As Pureval takes office, he said his place in city history is not lost on him.

He is now the first Asian American mayor of Cincinnati or any major midwest city. When he addressed the crowd Tuesday morning, he reflected on what this moment would mean to his late father, a refugee from Punjab, India.

“He was barely an adult when he and my mother, a refugee from Tibet, made the impossibly courageous decision to leave everything behind in search of a better life,” he said. “My dad’s simple bold courage tilted the axis on which my world is based. I owe everything to his belief in America and the worldview it cultivated for me.”

Ceremonial gifts presented to Mayor Pureval and his family by members of the Asian American Pacific Islander (AAPI) community. At least several of them traveled from Indianapolis.

Crediting the labor community for providing good jobs for his parents and Ohio’s public education system for giving him and his brother a solid foundation, Pureval said his political dreams were made possible.

“In one generation, my family went from being refugees to now the next mayor of Cincinnati,” he said. “I doubt my father could have imagined a day like today.”

Pureval closed his speech, vowing to help others in Cincinnati find similar paths towards success by promoting youth job programs, equitable city development across its 52 neighborhoods and investing in sustainable infrastructure.

Before the new city council was sworn in, he left the city with a final thank you, and one last promise.

“I will not waste this opportunity,” he said.