ST. MARYS, Ohio — It sounds almost too good to be true — a farm that sucks greenhouse gasses out of the air, while producing the same beef and milk found at the grocery store, maybe even better quality, all thanks to a good, green field.

The process is called regenerative agriculture and some tout the method as a way to meaningfully address climate change. Skeptics, however, wonder if these claims are a little too optimistic. How much power can there really be in a field of grass?

Jordan Settlage considers himself an outlier among dairy farmers. 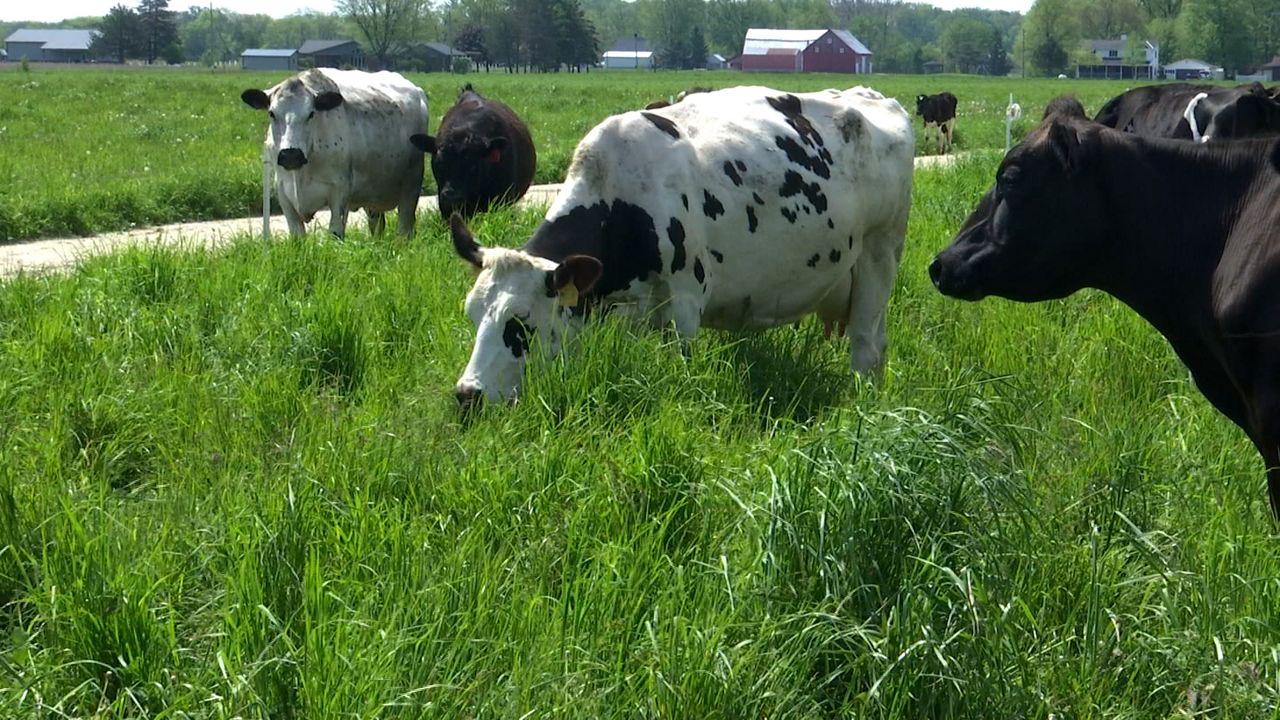 Settlage's herd grazing on his pasture.

Raised about an hour north of Dayton, he comes from a family of farmers, though they had sold their dairy when he was still young. Still, he said he grew up around cows and spent his teen and early adult years working at conventional dairy farms around western Ohio.

In 2015, he got the chance to start his own, but he wanted things to look different.

“I was around a lot of death and destruction. I was in the military and I decided that the way ag is going in conventional ag — we’re using a lot of herbicides, pesticides a lot of ‘cides,’” he said. “We decided we didn’t want to have any of that on our farm. ”

Instead of hundreds of cows confined to a feedlot full of corn and grain, he wanted a smaller-than-average herd, grazing in the grass and roaming the pasture.

“Harvesting their own feed, raising their own babies, living what I think would be a pretty comfortable idyllic life for a cow,” he said. 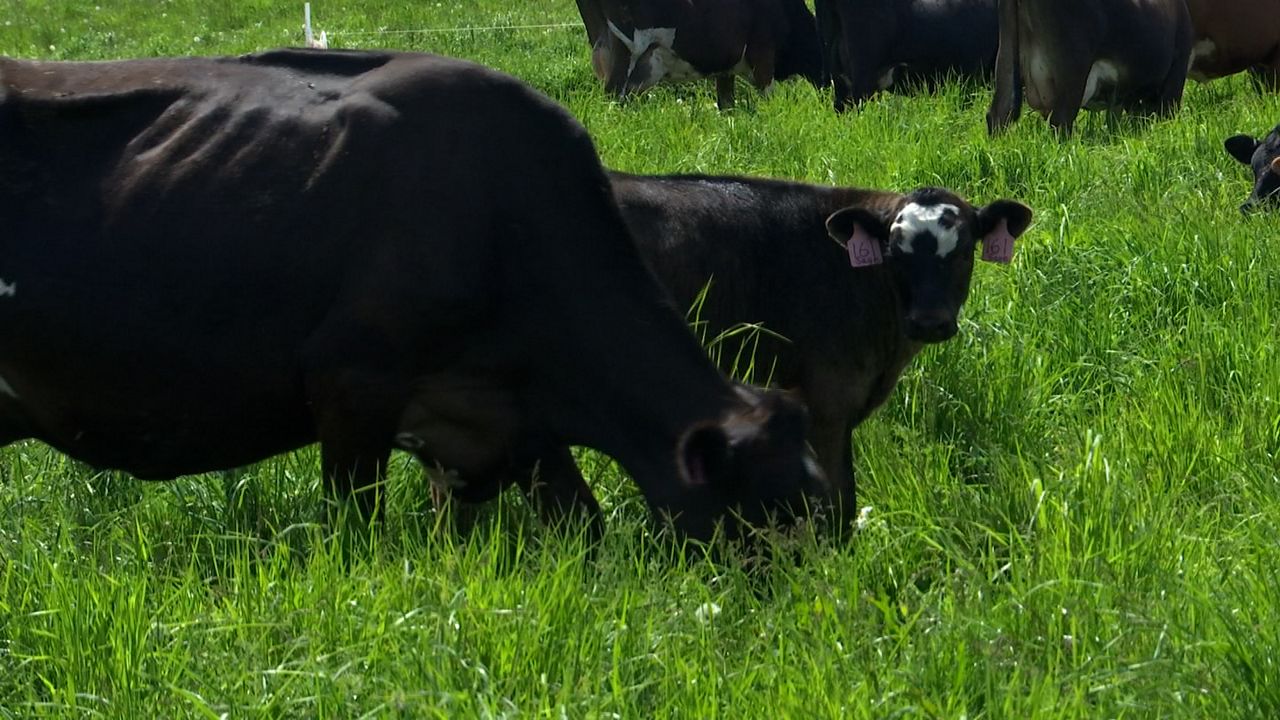 Settlage raises most of his calves alongside their mothers in the herd.

That’s the way it’s been since he started the farm in 2016, shortly after going to a meeting hosted by Organic Valley.

Before that, Settlage said he hadn’t really considered organic farming as a possibility, but he was struck by the optimism of everyone who was there. Suddenly, it seemed like his dream farm was not only possible, but that he’d have good company.

“It’s not a list of rules,” he said. “Just a different philosophy.”

He got his pasture growing and went through the three-year process to get organic certified. His entire farm officially earned the title in 2019.

“This is exactly what I envisioned working with,” Settlage said.

His farm is about home to about 155 cows and about 400 acres of grass, each divided into roughly four-acre pastures with moveable fencing. That’s how he feeds the herd everyday.

“So we want them on it to eat it, graze it and move onto the next paddock,” he said.

Settlage said he moves them daily so they don’t overgraze or trample the grass. One day of grazing and fertilizing the soil is plenty for a few weeks.

It’s also how he keeps the carbon in the ground.

“This is basically a giant solar panel pulling carbon out of the air and sinking it in the soil,” Settlage said.

A researcher from Ohio State University's School of Environment and Natural Resources tested that theory and found it was fairly accurate. Settlage’s farm is net carbon importer, which means its soil takes in more carbon than its animals release in greenhouse gasses, fulfilling the promise of regenerative agriculture. 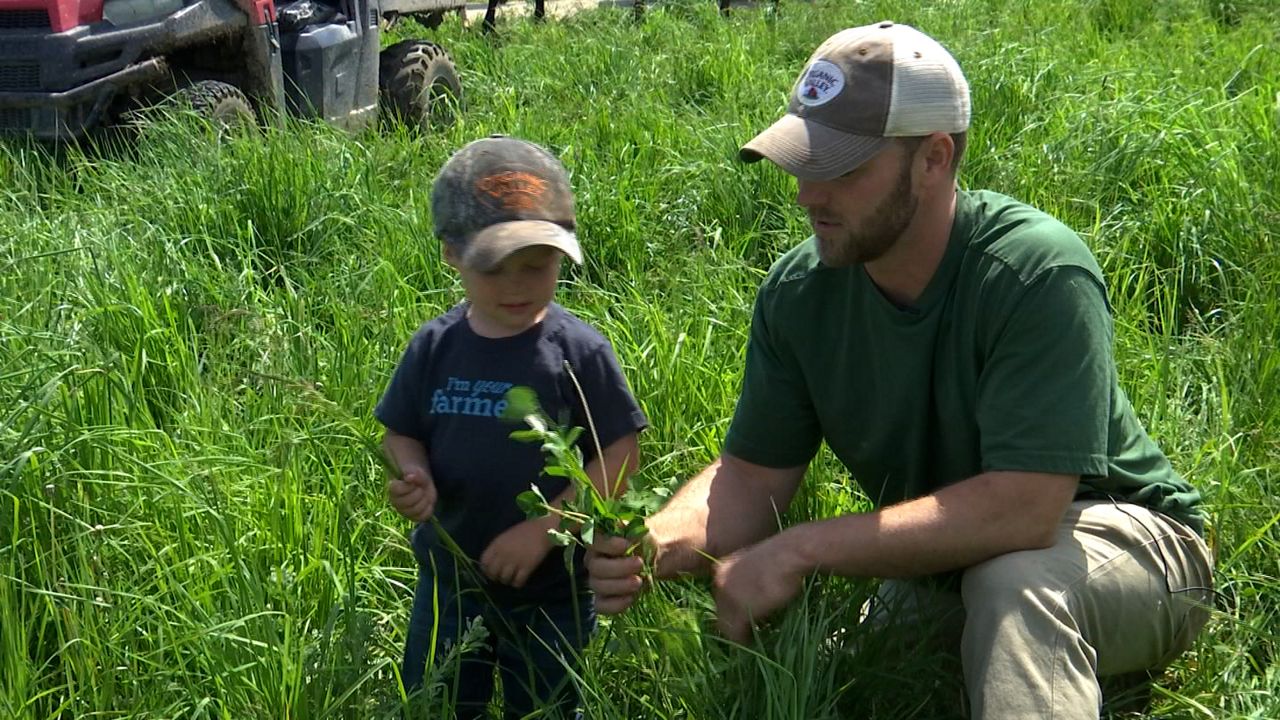 Settlage examines a sample of grass with his son.

The science behind the theory is a process some might remember from high school biology, the carbon cycle. Plants take in carbon dioxide for photosynthesis and carbon escapes their roots through a process called respiration.

Left undisturbed that carbon stays in the soil. The process occurs naturally and places like tropical rainforests are particularly efficient at “sinking” carbon.

Scientists call it carbon sequestration and proponents of regenerative agriculture believe with the right practices, farmers can maximize sequestration while reducing their emissions.

Settlage’s farm is a prime example of what proponents say farms practicing regenerative agriculture should do. He practices no-till farming, limits soil disturbance, maintains a diverse field of grass with long roots, lets manure fertilize the pasture naturally rather than collecting it in a lagoon and he doesn’t let his cows overgraze.

According to the EPA, agriculture accounts for 10% of the country’s greenhouse gas emissions. Most of that comes from the beef and dairy industries. If more farms like Settlage’s are able to take in more carbon than they emit, proponents of regenerative agriculture believe it could make a difference in addressing climate change.

Skeptics, meanwhile, doubt the efficiency of carbon sequestration through farming. They claim conventional agriculture, particularly grain-feeding cattle, is a more efficient way to produce food and prevents deforestation in the name of creating pasture. They also claim it unnecessarily maligns agriculture when fossil fuel consumption plays a much larger role in producing greenhouse gasses.

Even for consumers seeking greener products, there’s no guarantee all farmers with grass-fed cattle are applying the strategies properly. The grass needs to be able to grow firm, deep roots, and if animals trample or disturb the soil, that can release the sequestered carbon.

Additionally, changing the way a farm operates is expensive, especially for an industry that’s already struggling.

The USDA reports the number of dairy farms across the country has seen a steady decline since 2003 and by 2020, fewer than half of the country’s dairy herds remained. In the meantime, the average size of dairy herds has more than tripled since 1992.

That means big dairy farms are getting bigger as farms disappear.

Back on the Settlage Farm

One of the reasons Settlage said the model works for him is because his farm is small. He said he wanted it to be a manageable operation for his family to handle without employees.

As a co-op farmer with Organic Valley, he said he’s been able to get a sustainable price for the milk he produces and he’s got enough product for the milk truck to stop by nearly every day.

Settlage doesn’t want his farm to get much bigger, and if it did, he’s not sure his model would be very sustainable.

“There’s some farms out there that are claiming this style that are incredibly large,” he said. “I’d really like to speak to their ag managers because I’d like to know how they’re doing it.”

That’s another point critics bring up, they’re skeptical this style of farming can be universalized or even replicated on a large scale. Meanwhile, supporters say that’s not the point.

Researchers at institutes like the Carbon Management and Sequestration Center at OSU are looking at a variety of ways to improve soil sequestration and remove greenhouse gasses from the atmosphere. Regenerative agriculture is one of many examples alongside agroforestry, the restoration of desertified land.

As for Settlage, he said he’s just hoping to run a dairy that operates like an ecosystem, supported by growth and life.

“For somewhere around 270 to 300 days a year we’re out on pasture you get a lot of days that look like this nice breeze, green pastures, cows comfortably relaxing getting fresh air, fresh food.”

He said his experience shows this process makes for happy cows and good quality milk.