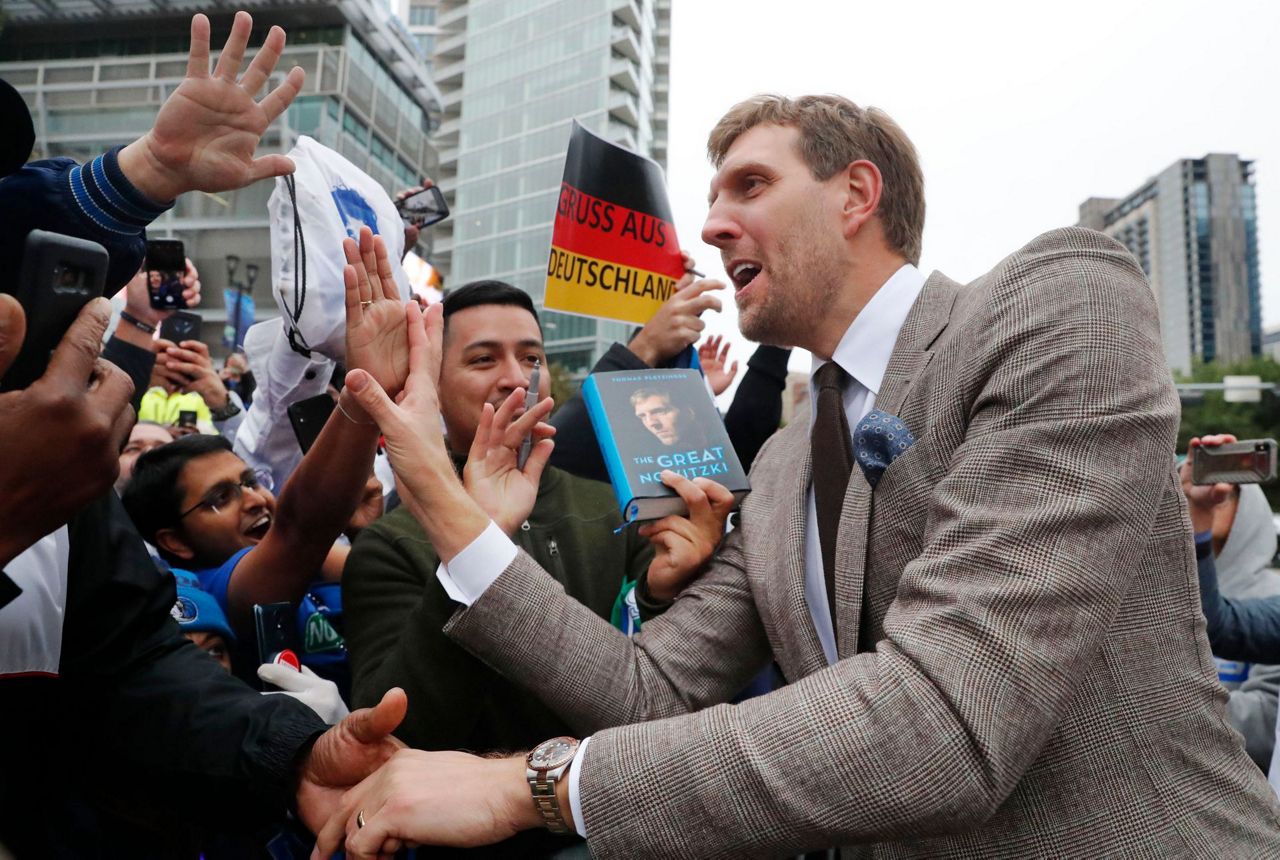 The big German accepted the gesture with characteristic humor and humility.

"It's sort of surreal," he said. "From my first year, the city probably wouldn't have named a Dumpster after me."

Nowitzki, now 41, retired after last season, his 21st with the franchise. The 14-time All-Star is easily the greatest player in Mavericks history and the highest-scoring foreign-born player in NBA history. The 2007 NBA MVP will forever be beloved around here for helping Dallas win its only championship in 2011 when he was NBA Finals MVP.

Nowitzki Way is the former 2900-3000 block of Olive Street south of the American Airlines Center, where Nowitzki played 18 of his NBA-record 21 seasons with only one franchise. The City Council approved the name change in a unanimous vote. Most of the event was moved inside on a cool, windy day.

"It's a little bit bigger than basketball," Nowitzki said, choking up. "This is about my relationship with the city. There was a lot of love that I've received from this community."

He then noted that there were questions about why the new street was not "Dirk Drive or Dirk Way."

"This is for my family to be represented," he said. "First of all, I never drove much in my career."

Dallas Mayor Eric Johnson spoke of Nowitzki's civic-mindedness in the city where he arrived as a 20-year-old in 1998.

"Dirk reached out to me personally to ask what he could do to help our city after the (Oct. 20) tornado" Johnson said. "He and (Los Angeles Dodgers pitcher) Clayton Kershaw came to our emergency operations center to greet our city employees who had been working around the clock."

Since his retirement in April, Nowitzki has devoted time to his wife and three children, and to the Dirk Nowitzki Foundation, established in 2001. Its mission is the betterment of health and welfare of children and women.

The ceremony was attended by former and current Mavericks and all three of his coaches, Don Nelson, Avery Johnson and Rick Carlisle, who brought along a reminder of the greatest highlight for Nowitzki and the Mavericks. The coach wore a "champagne-soaked" suit that had been in his closet since June 12, 2011, when Dallas won its title.

"I felt some day there would be an appropriate time to wear this again," Carlisle said. "This is a beautiful day."

Mavericks owner Mark Cuban inherited Nowitzki when he bought the team in 2000. At that time, he heard criticism of the young player.

"He was soft, and slow, and couldn't really play," he recalled of those opinions. "Trade calls would come in, and Donnie (Nelson) would be, like, 'Nope. This guy's the real deal.'"