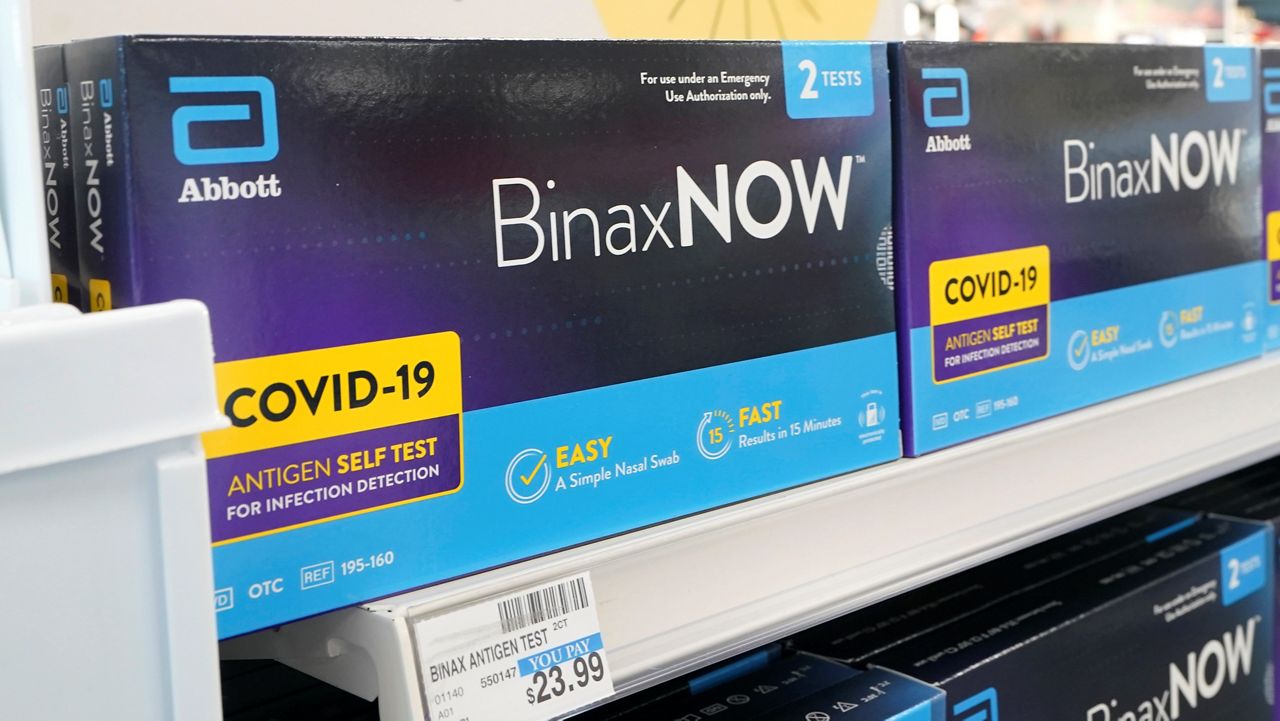 Boxes of BinaxNow home COVID-19 tests made by Abbott are shown for sale Monday, Nov. 15, 2021, at a CVS store in Lakewood, Wash., south of Seattle. After weeks of shortages, retailers like CVS say they now have ample supplies of rapid COVID-19 test kits, but experts are bracing to see whether it will be enough as Americans gather for Thanksgiving and new outbreaks spark across the Northern and Western states. (AP Photo/Ted S. Warren)

The Biden administration is urging Americans to get tested for COVID-19 before traveling to visit friends and family this holiday season, seeking to curb the rise in new cases caused by the highly transmissible omicron variant, which has already driven a new surge of infections in South Africa and Europe.

Researchers are scrambling to determine the efficacy that existing COVID-19 vaccines have on the new variant, though preliminary data suggest individuals with two vaccine shots and who have received a booster are largely protected from severe infection.

In the meantime, the White House has renewed its call for Americans to get tested for COVID-19, especially before gathering with friends or extended family.

But in the run-up to a busy holiday travel schedule, pharmacies have been inundated with patients hoping to receive a walk-up test or purchase the at-home rapid antigen tests.

Experts say those tests have been flying off the shelves for weeks and believe it is unlikely stores will be able to restock an adequate supply ahead of the holidays.

“The rapid tests — those that are done within 20 or 30 minutes in your home — those are in very short, if not completely out of stock, supply,” said Jason Feldman, CEO of Vault Health, a company that sells at-home PCR saliva tests for COVID-19.

Speaking to Spectrum News, Feldman said testing capacity in the U.S. has been hobbled by supply chain disruptions, mixed messaging from the U.S. government and a lack of early investment in testing.

“When we got through last year’s holiday season and into the first part of this year, the CDC said take off your masks in middle May, everybody sort of gave up worrying about testing,” Feldman said. “So the supply chain started to diminish, and then delta hit.”

Another prohibitive factor for many American families is the rising cost of in-home tests.

As demand rises for the rapid antigen tests, so too have prices, which now run anywhere from $20 to more than $100 per person, posing a significant financial burden for many families, especially those who plan to test their family members before and after holiday gatherings.

Last week, the Biden administration rolled out a plan that would reimburse Americans for at-home COVID-19 tests through private insurance beginning next year — though some experts have argued the reimbursement process creates a burden for people getting tested.

Still, experts have sought to drive home just how critical it is for Americans to get tested — even those who are fully vaccinated — before spending time with groups of people this holiday season.

As experts scramble for more clarity on the new variant, they seem to agree that omicron is more resistant to antibodies than previous variants, including delta — though how much more resistant still remains unclear.

“There isn’t a perfect correlation between what happens in the lab and what happens in the real world. The real world is a lot more complicated,” Jacob Lemieux, an infectious disease doctor at Massachusetts General Hospital, told The Washington Post last week. “How much drop in real-world efficacy are we going to see? No one knows the answer.”

“We always say better safe than sorry,” said Dr. Damika Walker, a pharmacist at Grubbs Pharmacy in Washington, D.C. “If you need to get a test, if you think you want a test, it’s always better to just get tested to have that peace of mind.”

Meanwhile on Thursday, President Joe Biden also issued a strong warning about the omicron variant, telling reporters it’s “going to start to spread much more rapidly” in the U.S. beginning after the holidays.

“Due to the steps we’ve taken, omicron has not yet spread as fast as it would have otherwise done,” he said. “But it is here now, and it’s spreading, and it’s going to increase.

“For (the) unvaccinated, we are looking at a winter of severe illness and death,” Biden said.