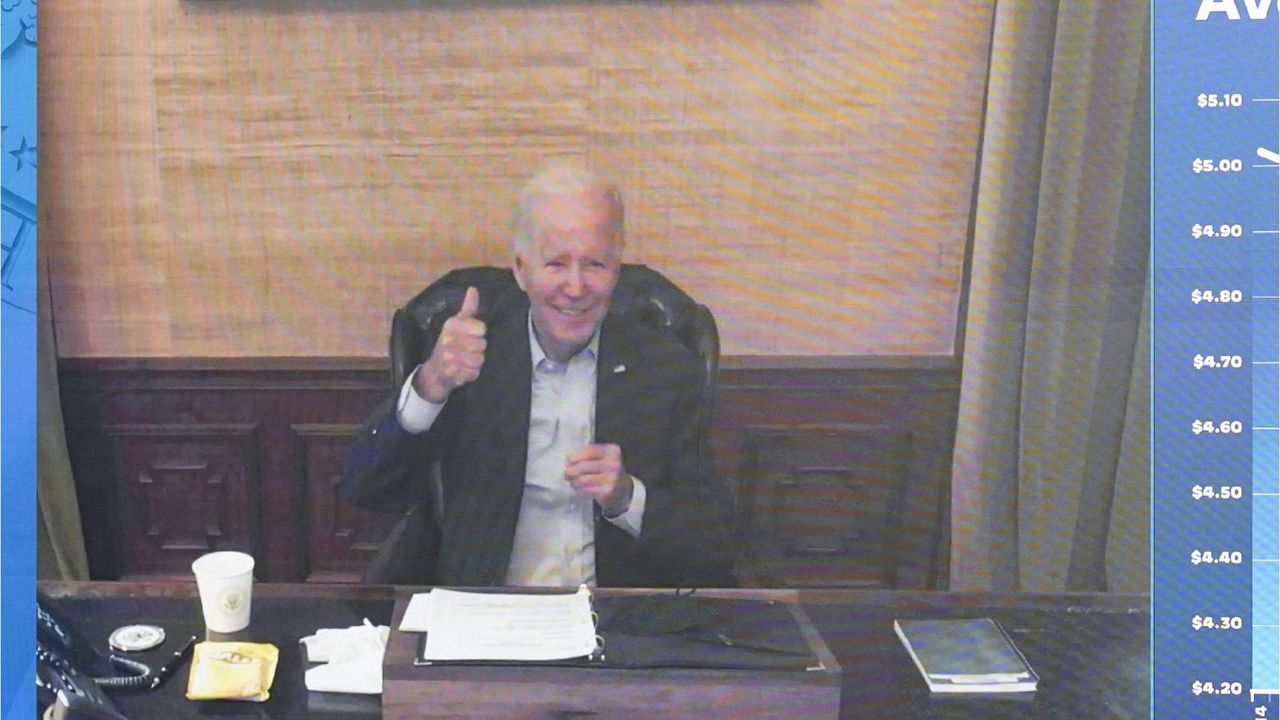 President Joe Biden gives a thumbs up after being asked by members of the media how he is feeling as he speaks virtually during a meeting with his economic team in the South Court Auditorium on the White House complex in Washington, Friday, July 22, 2022. (AP Photo/Andrew Harnik)

In an update on Saturday, President Joe Biden's physician said that his symptoms "continue to improve," though he now also has sore throat and body aches.

Dr. Kevin O'Connor wrote in a letter to White House press secretary Karine Jean-Pierre that the president was "most likely" infected by the BA.5 variant, currently the most common strain in the United States, based on preliminary sequencing.

Biden is continuing to take Paxlovid, Pfizer's oral antiviral COVID-19 therapy, as well as Tylenol, his albuterol inhaler as needed to treat his cough and low dose aspirin as a type of blood-thinner.

New letter from the president’s doctor:

- POTUS original symptoms are improving but he also now has sore throat and body aches
- He’s continuing Tylenol, using his inhaler and aspirin
- He likely has the BA5 variant, due to preliminary sequencing (strain most common in US) pic.twitter.com/dwkfiCbmc1

The update comes one day after the president spoke virtually to members of the press and White House officials, appearing in public for the first time since he tested for COVID-19 one day earlier.

He spoke at a meeting with his economic and energy team on gas prices, appearing remotely by video.

"Let me start by apologizing for my voice," the president said, clearing his throat. "I feel much better than I sound."

Dr. Ashish Jha, the White House's top COVID adviser, told reporters Friday afternoon that he spoke to the president as well, who promised him that he finished both his breakfast and lunch "fully," after not finishing his breakfast the day before.

"He showed me his plate," Jha said. "He joked that his one regret was that his appetite had not changed."

The White House medical unit also identified 17 close contacts of the president, the White House press secretary said, though none of them have tested positive so far. Those contacts include Vice President Kamala Harris, First Lady Jill Biden, senior staff and members of Congress he met with earlier in the week.

"None of the staff members have tested positive to date. And all of them are wearing masks around other people per CDC guidelines," said press secretary Karine Jean-Pierre.

The president's physician, Dr. Kevin O'Connor, did note that Biden reached a higher temperature of 99.4º Thursday evening, though Dr. Jha later clarified Friday afternoon that the number is in the "normal range" and would not be considered a fever.

That high temperature responded to Tylenol and has since been normal, O'Connor wrote in the letter Friday morning.

- POTUS completed first day of Paxlovid last night
- He had a temp last night and took Tylenol, now normal
- Now has a "loose cough" but overall symptoms have improved

Still expects Biden to "respond favorably" and that has not changed. pic.twitter.com/iMWUCIvSgJ

The president, who completed his first day of Paxlovid Thursday evening, is tolerating treatment well, the doctor said, and will continue as planned.

Citing the president's mild symptoms and protections from the virus, Dr. Jha also urged Americans to get vaccinated and seek out treatments if they get infected with COVID-19 and are at high risk.

"Let's continue to do everything we can to prevent serious illness and death from this pandemic."

Dr. O'Connor also gave the president aspirin, since he stopped taking his normal blood thinner medication due to possible interactions with Paxlovid.

The doctor wrote that he anticipates Biden will continue to "respond favorably" to treatment due to his vaccination and booster status, and he will also continue to isolate until he receives a negative, per White House protocol.

"Although nothing is ever guaranteed, we feel pretty confident that he's following what looks like a benign course."

👇I asked Dr. Fauci about @POTUS's bout with #COVID19 and any concerns he has for the president's longterm recovery. pic.twitter.com/LMYn7pLS2V

“The good news is that [Biden is] in generally good health," Dr. Fauci told Spectrum News' Kevin Frey, mentioning he spoke with President Biden's physician Dr. Kevin O'Connor on Friday morning. "He's been vaccinated, he's been doubly boosted. And he's on an antiviral drug, Paxlovid, which clearly has a very positive impact in preventing people from progressing to severe disease.”

"Although nothing is ever guaranteed, we feel pretty confident that he's following what looks like a benign course," Dr. Fauci added. "But obviously, he'll be followed very closely to make sure that that course continues in a relatively mild manner."

For more than a year, President Biden's ability to avoid the coronavirus seemed to defy the odds. When he finally did test positive, the White House was ready. It set out to turn the diagnosis into a "teachable moment" and dispel any notion of a crisis.

"The president does what every other person in America does every day, which is he takes reasonable precautions against COVID but does his job," White House Chief of Staff Ron Klain told MSNBC late in the afternoon on Thursday.

It was a day that began with Biden's COVID-19 results and included repeated assurances over the coming hours that the president was hard at work while isolating in the residential areas of the White House with "very mild symptoms" including a runny nose, dry cough and fatigue.

Biden, in a blazer and Oxford shirt, recorded a video from the White House balcony telling people: "I'm doing well, getting a lot of work done. And, in the meantime, thanks for your concern. And keep the faith. It's going to be OK."

On Friday, Biden was scheduled to meet virtually with his economic team and senior advisors to discuss congressional priorities.

It was all part of an administration effort to shift the narrative from a health scare to a display of Biden as the personification of the idea that most Americans can get COVID and recover without too much suffering and disruption if they've gotten their shots and taken other important steps to protect themselves.

The message was crafted to alleviate voters' concerns about Biden's health — at 79, he's the oldest person ever to be president. And it was aimed at demonstrating to the country that the pandemic is far less of a threat than it was before Biden took office, thanks to widespread vaccines and new therapeutic drugs.

Michael Osterholm, director of the Center for Infectious Disease Research and Policy at the University of Minnesota, said it's important for Americans to know they must remain careful about the virus, which continues to kill hundreds of people daily.

"That's the balance that we have to strike," Osterholm said. "The president of the United States will do very well. But that may not be true for everyone."

During a briefing Thursday, Jean-Pierre bristled at suggestions the Biden administration wasn't being much more forthcoming with information about the president's illness than that of his predecessor, Donald Trump. The former president contracted COVID-19 in the fall of 2020, before vaccines were available, and was hospitalized at Walter Reed National Military Medical Center for three nights.

Asked about the possibility Biden might need to be hospitalized, Jha stressed that the president was "doing well" and added that there were "obviously a lot of resources available here at the White House to take care of him."

"Walter Reed is always on standby for presidents. That's always an option," he added. "That's true whether the president had COVID or not."

Biden plans to continue to isolate until he tests negative, the White House said.

Jean-Pierre’s predecessor, Jen Psaki, noted that White House officials have “been preparing for this probably for several months now, given the percentage of people in the country who have tested positive.”

“What they need to do over the next couple of days is show him working and show him still active and serving as president and I’m certain they’ll likely do that,” Psaki, who left her post as White House press secretary in May, said on MSNBC, where she’s working as a commentator.

Biden will isolate until he tests negative, the White House said.

Dr. Eric Topol, head of Scripps Research Translational Institute, said that could mean he's "out of commission from interacting with people for at least eight to 10 days."

"This could go on easily for a couple of weeks, but the good thing is they are going to monitor him very carefully," Topol said. "That is what we should be doing for everyone so that we don't keep playing into the virus' hands, causing more spread when it's already hyper-spreadable."