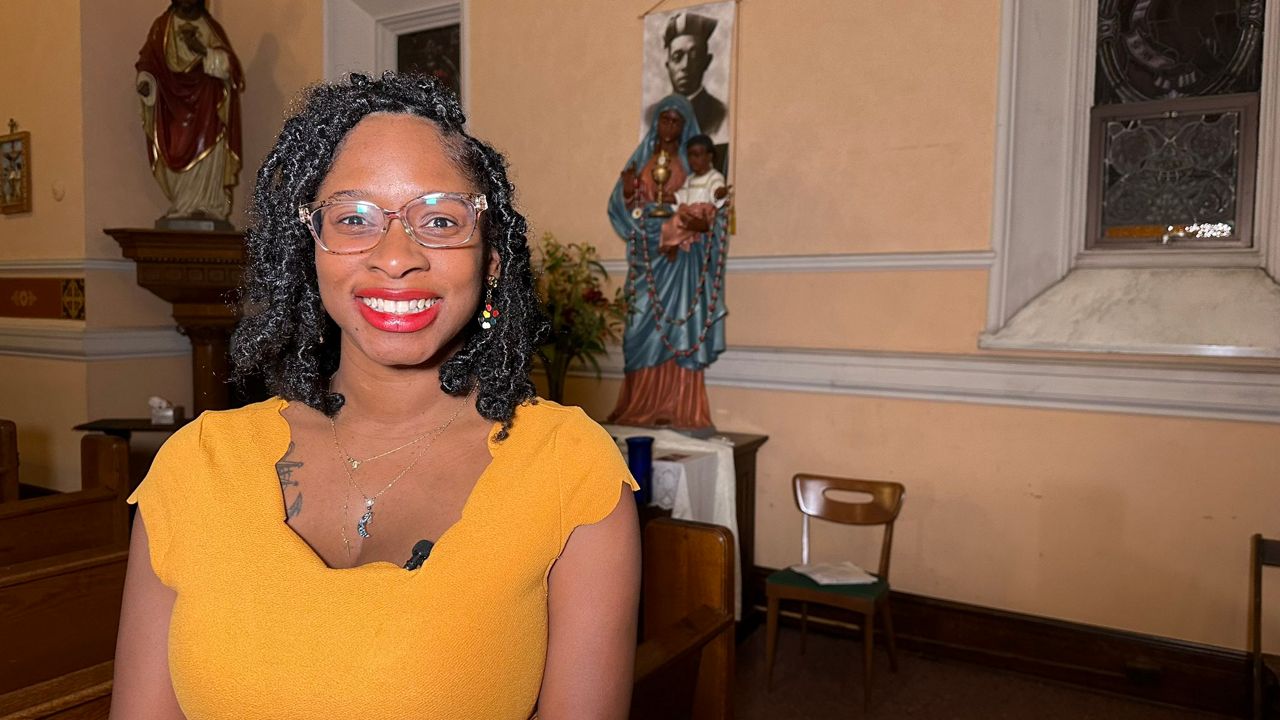 CLEVELAND — Alana Garrett-Ferguson said her life story is about faith in action.

She is one of Mayor Justin Bibb’s 10 nominees for Cleveland’s new Community Police Commission.

Garrett-Ferguson sees a direct connection between her religious beliefs and viewpoints on police, community relations.

“My faith is all about being super transformative, about allowing people multiple chances," she said sitting at St. Adalbert Parish, the city’s first and oldest black Catholic church that is celebrating its 100th year. “Looking at these systems, yes they have harmed us, but they also, we also can restore ourselves in them and they can be transformed into something beautiful and better.”

Garrett-Ferguson calls her nomination a humbling honor. She is one of 13 nominees for this historic commission. It's a strengthened citizen oversight board that has the final authority on recruitment, training and disciplinary decisions for the Cleveland Police Department.

Ten nominees are coming from the mayor and three are from City Council.

“It’s time for community members to actually feel safe again in their homes," she said.

Placing more power in the hands of a diverse commission was the goal of Issue 24. The ballot measure passed by 59% in November of last year and outlined specific requirements in the city’s charter that make the commission a permanent board. It was initially established in 2015 as a mandate from the Department of Justice in Cleveland’s consent decree.

"So, we want to be a partner and help with law enforcement, but also make it clear and very well known that the ways that policing has been done in this city has to change," Garrett-Ferguson said. "It cannot continue."

The lifelong Clevelander has always taken an interest in leadership and advocacy for a range of issues, including reproductive justice and anti-bullying.

She said a defining moment that shaped her current viewpoints happened when she was a student at Shaw High School. She remembers waiting for her grandma to pick her up after school at a nearby gas station.

“And something broke out," she said. "I don’t remember if it was a fight or whatever. I had nothing to do with it at the gas station. But I was like picked up and thrown in the back of a car by a police officer. I was hit with a baton."

Today, Garrett-Ferguson considers herself an abolitionist and is a member of NAACP Cleveland.

"When I say I'm abolitionist, it means I’m working to build a society that addresses the root causes of harm and evil, that destroys the institutions that contribute to that harm and work collectively to recreate a system that allows for people to restored with dignity and love not dehumanizing punishment," she said. "Abolition is the goal. This is just the beginning."

She was previously a part of the Community Police Commission’s Community and Problem Oriented Policing (CPOP) work group.

Garrett-Ferguson supported Issue 24’s passage and was encouraged by community members to apply to the new board.

“I’m not here to be a vigilante of any sort," she said. "I’m here for real police accountability, and I believe that one of the best ways in which we can be the change that we all want to see is to take some of those experiences that we’ve had, even the ugly ones, and use those as a way to be empowered to help other people."

A record number of 300 candidates applied. Forty made it to the next phase of the process, which included interviews with a Resident Review Committee and Selection Advisory Panel. During those interviews, Garrett-Ferguson shared her philosophy on policing.

“A lot of the issues that we have or even reasons for dispatch calls, they don’t have to be as escalated and involve police if we have the right institutions, the right programs and initiatives being funded to help mitigate those issues," she said.

The city’s charter states the commission needs to include a variety of perspectives with representatives who are "knowledgeable of, as applicable, the issues of those who are limited-English speakers, homeless, or who have mental-illness and substance-abuse disorders; those who have been directly impacted by police violence, or be a family member of a person who has been killed by police; those who have been incarcerated and exonerated where police were involved in the wrongful conviction or incarceration; gun-violence survivors or be a family member of a person killed by gun violence; an attorney with experience representing victims of police misconduct or criminally prosecuting police misconduct. A single Commission member may fulfill more than one of the above categories."

Some who helped create Issue 24, said the nominees don’t meet every criteria and argue the language of the charter was not interpreted correctly. Subodh Chandra is a civil rights attorney who helped write the charter amendment. :

"The administration's decision to disregard the will of the voters as expressed through the plain language of the police-reform charter amendment is disappointing to the families of survivors of police violence who crafted the amendments. The amendment plainly requires the mayor and council to ensure that five specified categories are represented," Chandra said in a statement. "The amendment also says that a single member may fulfill more than one of those categories—language that would be meaningless if the administration's claim that the politicians need to only have one category represented were true. Because of this faithlessness to the charter, there will be no attorney with experience holding police accountable on the Commission and survivors of police violence will also go unrepresented. This is a fundamental betrayal of the voters who adopted police reform."

The mayor and law director disagree and have given statements of pride about the people selected. Law Director Mark Griffin sent a letter to Judge Solomon Oliver on Nov. 2.

The letter reads in part, “The CPC nominees proposed by Mayor Bibb represent a knowledgeable and balanced group. They include an expert on bail reform, several grassroots community activists, persons who have suffered violence personally or through their families, a veteran, a teacher, a faith leader, a social worker, a police association representative, a formerly incarcerated person, and many other intersectionalities.”

Today, I stood on the steps of City Hall to present our nominees for the new police commission. We are proud of the people we have selected, we are confident in the selection process and we won’t let interruptions stand in the way of progress. pic.twitter.com/zWhk8rfOBK

“Criticizing some of what was outlined, I think that they have a right to do that,” Garrett-Ferguson said. “That’s a part of democracy.”

For her, it all comes down to faith. She sees direct parallels between her church and Issue 24.

In 2010, St. Adalbert Parish was shut down by the Diocese of Cleveland, and a small group of parishioners were successful in their two-year long fight to reverse the decision and reopen the church.

It took a grassroots effort from people impacted by police violence to enact change through the passage of Issue 24.

“All of those things combined have taught me when you have dedicated people who are organized, who have a goal in mind, who are trying to make positive change, it will happen," Garrett-Ferguson said

She hopes to bring that resilience to the table as a commissioner.

If confirmed by the City Council Mayor’s Appointments Committee, Garrett-Ferguson will hold a four-year-term.