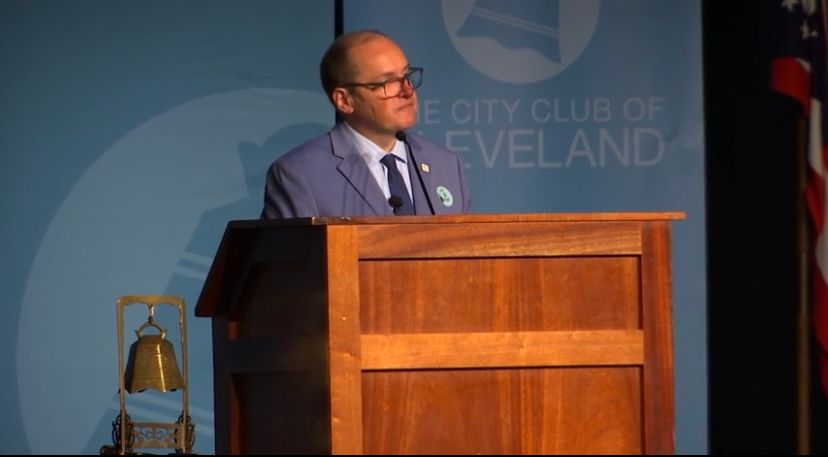 The crowd gave Gordon a standing ovation when he walked out on stage.

He announced last week he would be stepping down at the end of the 2022-2023 school year.

“Personally, this is tough,” Gordon told the crowd. “I would be lying if I told you I was not sad.”

Gordon was appointed chief executive officer of the school district in 2011 after serving as the District’s Chief Academic Officer for four years.

In 2019, the school board granted a four-year contact extension for Gordon. That extension is set to end at the conclusion of the 2022-2023 school year.

“CMSD is the highest-rated urban school district in the State of Ohio.”

“I know that I could’ve stayed on longer with CMSD and I’m confident that if I had done so, I would have continued to garner the stormy support I enjoy today,” said Gordon. "One of the most difficult but important moves a leader makes is to know when to hand off the baton,” he said.

Gordon has brought about much change to school district in his 11 years as CEO. Most notably, he helped to implement “Say Yes to Education”, a plan that provides free college tuition to all CMSD students.

“I’m confident that our legacy will be protected because we as a community are looking ahead, intentionally looking ahead,” said Gordon.

Unlike other school districts in Ohio where school board members are elected, at CMSD, they’re appointed by the mayor.

Before the State of the Schools address, Mayor Bibb told Spectrum News that city leaders have already begun the search for Gordon’s replacement.

“We have a lot of work to do to fill some very big shoes,” said Mayor Bibb.

Last week, Gordon told Spectrum News he’s not sure what he plans on doing after he leaves the school district and remains focused only on his final year as CEO.

“I’m going to remember the kids. It still stuns me every day that I walk into a school and kids say, “You’re Mr. Eric Gordon!” I didn’t know my superintendent and the fact that they know me feels really personal,” said Gordon.