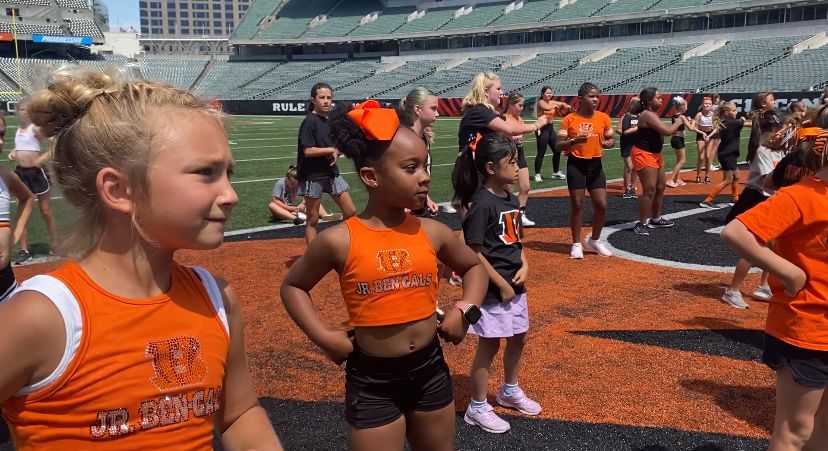 CINCINNATI — Football fever is still running high in Cincinnati after the Bengals went to the Super Bowl for the first time in decades last season. The excitement is trickling into its cheerleading program.

The Cincinnati Bengals cheerleaders, the Ben-gals, are working on a new routine for their next round of recruits. Nine-year-old Abrianna Reynolds is one of them.

“So exciting you get to go on the field where Joe Burrow plays,” said Abianna's grandma Tina Reynolds, who signed her up to cheer.

Abrianna is a part of the newest class of Junior Ben-gals cheerleaders.

“I think it’s fun and exciting and maybe this is something she can do later on,” said Tina Reynolds.

The juniors are practicing for their halftime performance in the next pre-season game against the LA Rams. It's the same team the Bengals lost the Super Bowl title to this year, but that excitement from the team just making it that far is still left behind, and is giving the Ben-gals a record-setting cheer year.

“The momentum is, the energy is just overflowing as a result," said Ben-gals Cheer Director Charlotte Simons. "It has trickled down to our five-year-olds, six-year-olds, all the way up to 18."

A former Ben-gals pro cheerleader herself, Simons is the longtime director of the Ben-gals cheer team and oversees the junior program.

She said normally they’ll get about 150 kids in the junior program, but this year more than 2,000 applied to be a part of the team.

“We were so excited, not expecting to have a few thousand registered for the program, all in all, we will be filling the field,” said Simons.

She said they could only pick the first 350 to sign up because that’s the most they could fit on the field, but she said they are already starting a waiting list for the 2023 Junior Ben-gals team.

The girls go through two days and several hours of practice during camp and will be performing a halftime routine at Saturday's pre-season game.