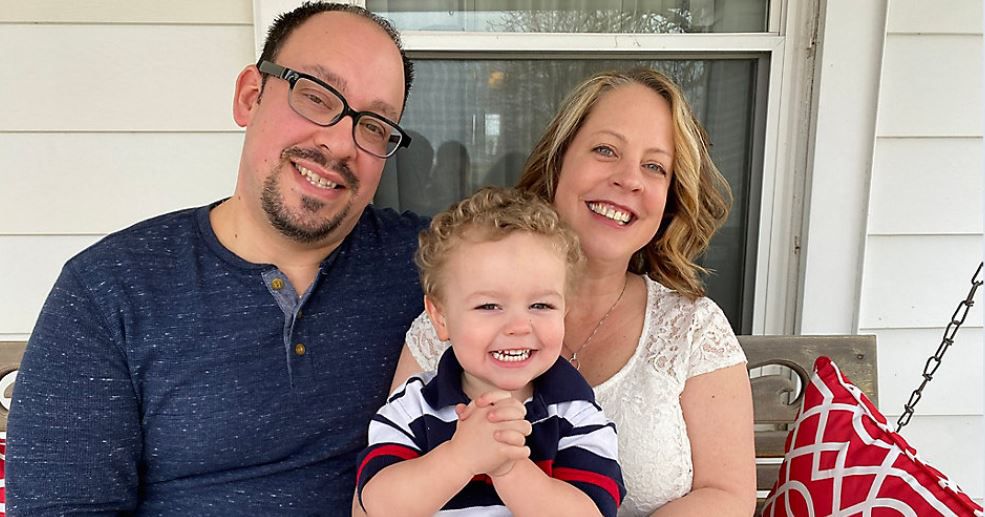 By Micaela Marshall Ohio
SHARE
CLEVELAND — The Roshons are a happy family of three.


Their son, Ben, is 2 years old, and the family is still growing. Jennifer Roshon is 20 weeks pregnant, and she is thrilled to soon be a mom of two, even if it is happening later in life than she expected.

Jennifer has been married to her husband, Nate Roshon, for two decades. The couple struggled with infertility pretty much that entire time.

“Over the course of 20 years, we had five foreign exchange students," she said. "We tried the traditional adoption route several times and the doors just kept slamming in our faces."

It hasn’t been easy.

“I honestly at one point said 'I’m done. I’m done. I’m so done. I can’t do this. This is too hard. I don’t know what to do, but I can’t keep being hopeful,'" she said. "I really felt God speak to my heart at that point and say 'you keep thinking that your life is going to take off when you have a child, but I’m here to tell you that I have a life that I want you to live now, and you’re missing it.'"

So, the Roshons put their trust in God, and eventually gave embryo adoption a shot in 2017.

The Roshons are a happy family of 3. Ben is 2 1/2yo and Jennifer is 20 weeks pregnant. She can’t wait to be a mom of 2, even if it’s happening later in life than she expected. After 20 years of infertility issues, this family is growing thanks to embryo adoption. @SpectrumNews1OH pic.twitter.com/WhyQRvlhWT

Embryo adoption is when a couple who used in vitro fertilization donates frozen embryos so another couple can achieve pregnancy.

“For the baby inside me right now and for Ben that we do have, we have six other children that are in heaven that didn’t make it," she said. "The very first time we tried all four embryos were lost and we were devastated. Ben was a twin. I carried his twin for five weeks, and then we lost that baby. We put two embryos in this time and one of them didn’t take."

Ben does not share their DNA but does share his dad’s love for cooking. Nate Roshon remembers how hard it was over the years, which makes him all the more grateful for their family today.

“Infertility is tough," he said. "It ebbs and flows. There can be blame, you know, if it’s one particular person versus both. Over the course of 20 years we had both. I mean early on it was like Jen has a great womb, but her ovaries don’t work and everything was great for me and then later on I had low testosterone and other issues as I aged."

While they said it isn’t ideal to be older parents, they are overjoyed to have the opportunity. Thet want to encourage others struggling with similar issues and remind them that there is hope.

“I will say to any woman out there that wants to have a baby, don’t you ever give up,"Jennifer said. "Do I have any energy being 49 and pregnant? Absolutely not. I’m glad I have an awesome husband because I do a lot of sitting around growing a baby these days. But never ever, ever, ever give up. There are options and this is an amazing option."

The Roshons used an agency called Nightlight Christian Adoptions and went through its Snowflakes Embryo Adoption Program to start their family.

“We’re attracting what we call placing families, the donor, and getting them prepared through the process which includes following some FDA rules and regulations," said Kimberly Tyson, the vice president of Snowflakes adoption program. "The adoptive family is preparing themselves by completing what’s called an adoption home study."

After that, both the donor and the adoptive parents have the opportunity to review a family profile and medical history to decide if they’d like to match and move forward in the process.

Tyson said the success rate of transfer to pregnancy is around 50% but once a adoptive parent gets pregnant, the chance they will give birth jumps up to 96%.

The ability for the adoptive mom to carry the baby herself makes a big difference.

The Snowflakes Embryo Adoption Program has existed for 25 years and just celebrated the birth of its 900th baby.