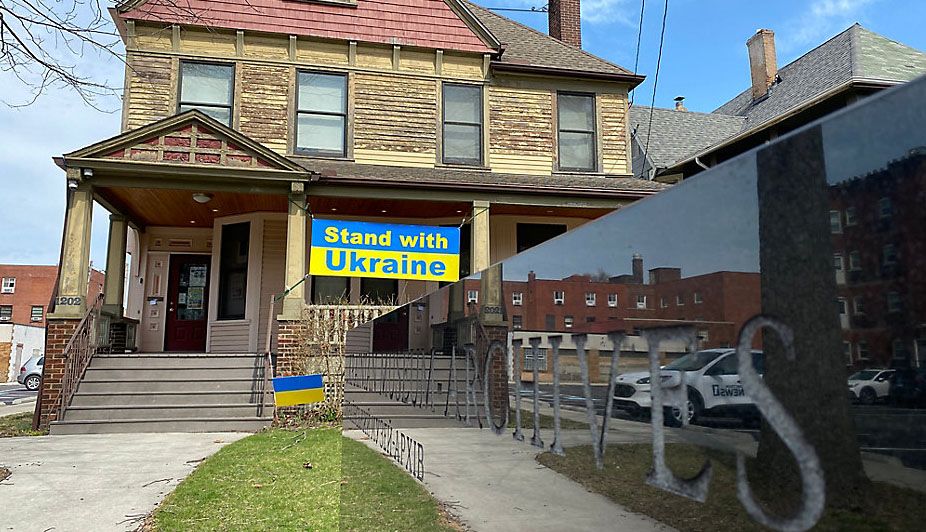 Since 1952, the Ukrainian Museum-Archives has stood in Cleveland’s Tremont neighborhood. (Micaela Marshall/Spectrum News 1)

CLEVELAND — Since 1952, the Ukrainian Museum-Archives stood in Cleveland’s Tremont neighborhood. Cleveland has a long history of welcoming refugees, and as the war rages on in Ukraine, local leaders say the community is once again eager to help.


"Many items that we have are unique. In other words, no one else has them," said Andy Fedynsky. He's the director of the Ukrainian Museum-Archives. “So, we have tens of thousands of items.”

Preserving Ukrainian artifacts is personal for him.

“My dad was the director of this museum, and he assembled, along with his friends and colleagues, this vast collection that was threatened because the neighborhood had declined," he said.

I'm working on a story about how Cleveland is preparing to welcome Ukrainian refugees. @GlobalCleveland expects a couple thousand refugees will soon be in northeast Ohio. Full report soon on @SpectrumNews1OH pic.twitter.com/QYxrZelBgT

So, he decided to take over and save the museum. It’s something he thought he’d do for a year or so. It’s been 35 years.

"I’ve been here ever since. Met somebody. We got married. You know the story," he said with a smile.

Connecting to his roots is important to Fedynsky.

“My parents were political refugees. I was born in Innsbruck, Austria right after the war," said Fedynsky.

Because of that, he can speak several languages: English, German and Ukrainian.

“I grew up in the Ukrainian community here in Cleveland,” he said.

It’s been busy at the museum since Russia invaded Ukraine in February.

“I’m getting dozens of inquiries every day," said Fedynsky.

Fedynsky said it’s gratifying to see the support pouring in for Ukraine.

“It reaffirms my faith, my belief in America, that we’re a good people," said Fedynsky. “At the time, heartbreaking at how many people are dying and the refugees and the suffering. So, you know, we are just rising, hopefully, to the occasion."

The United States is preparing to accept 100,000 refugees from Ukraine. Global Cleveland estimates a couple thousand Ukrainian refugees will come to northeast Ohio.

For the last 10 years, the nonprofit worked alongside other local organizations to welcome refugees from around the world who are fleeing from famine, war and all kinds of strife.

“The challenge we have is that this is unlike any other situation where people have had to flee a nation. Save for the evil of (Russia President Vladimir) Putin, people in Ukraine were thriving. Their economy was dynamic. They were growing in terms of their entrepreneurial base," said Joe Cimperman, the president of Global Cleveland.

Right now, Global Cleveland is helping to coordinate humanitarian aid that’s being sent to the Ukraine/Poland border and is offering resources, such as immigration law experts to help sort out visas.

The organization has several action steps it's requesting from the federal government. Global Cleveland is asking for $20 million in federal aid be allocated to northeast Ohio, which is home to one of the largest Ukrainian populations in America, according to officials.

The other steps relate to visas.

“So, what we’re asking the president and federal government to do is that every single person that comes here from Ukraine be granted unrestricted work visa status," said Cimperman. "President Biden and the federal government has issued something called Temporary Protection to people who came to Ukraine up until, if they were here by March 1, their visas were extended for 18 months. We are asking for that order to be extended through the end of December.”

Cimperman said many refugees are just now entering the United States, and it’s imperative Ukrainians are able to enter the American workforce smoothly.

Fedynsky said museum leaders are here to lend a helping hand and keep documenting Ukrainian history as the conflict continues.

“Outrage and horror that this is happening and a determination to help in any way we can whether it’s humanitarian assistance or lobbying our political leaders to provide Ukraine with the defensive weapons that they need to prevail and also pray for peace," he said.