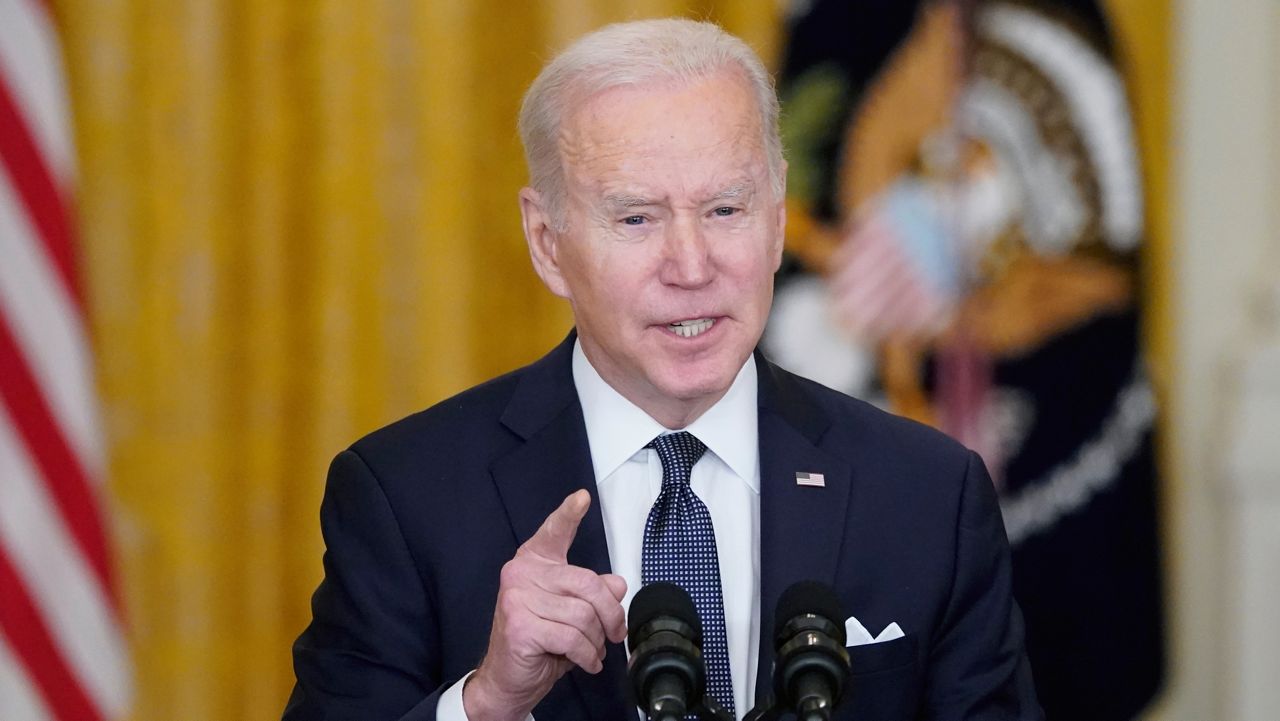 President Joe Biden on Tuesday said the United States could see "consequences at home" if Russia invades Ukraine, promising that American troops would defend NATO territory in Europe with their "full force" but once again saying U.S. troops would not be sent into Ukraine itself.

Biden also said that while an invasion remains highly possible, he was still intensely focused on a diplomatic pathway, and he spoke directly to the Russian people to make it clear that the U.S. wants to avoid a war.

"The United States will defend every inch of NATO territory with the full force of American power," the president said from the White House.

Biden also warned of possible economic impacts that U.S. and allied sanctions on Russia would cause in the case of an invasion. Biden said that his administration was working proactively with energy producers and shippers on contingency plans in the event of an invasion to try and preempt supply issues.

"To be clear, if Russia decides to invade, there will also be consequences here at home," Biden said. "The American people understand that defending democracy and liberty is never without cost. I will not pretend this will be painless."

Biden noted he would work with lawmakers on Capitol Hill on "additional measures to protect consumers and address the impact of prices at the pump," though he did not specify what those are.

White House press secretary Jen Psaki later said that all options are on the table to keep gas prices manageable, including tapping strategic oil reserves as the president did in late 2021. Psaki also said the administration was in contact with oil-producing countries outside of Russia to encourage them to prepare to produce more if needed.

"Clearly we need to ensure that the supply out in the global market is meeting the demand," Psaki said.

And despite Moscow's claims on Tuesday it was moving troops away from Ukraine's border, Biden said the U.S. has "not yet verified" the Russian drawdown, and he warned that an "invasion remains distinctly possible."

Biden also said Russia now has more than 150,000 troops amassed near Ukraine, higher than any number stated by U.S. officials so far.

Russian President Vladimir Putin had said earlier Tuesday that Moscow is ready for talks with the U.S. and NATO on limits for missile deployments and military transparency, in a new sign of easing East-West tensions. The statement came after Russia announced it is pulling back some troops from exercises that have raised fears of a potential invasion of Ukraine.

Biden on Tuesday said the U.S. is firmly committed to high-level diplomacy and that dialogue should get "every chance to succeed."

"We're not targeting the people of Russia. We do not seek to destabilize Russia. To the citizens of Russia: You are not our enemy," he said. "And I do not believe you want a bloody destructive war against Ukraine."

Still, President Biden reiterated that his administration is prepared for every scenario, including imposing harsh sanctions on Russia should Putin decide to invade.

Biden also spoke with French President Emmanuel Macron on Tuesday, where they "reviewed their recent conversations with their Russian and Ukrainian counterparts and affirmed their continued support for a diplomatic path forward," according to the White House.

The two leaders discussed their "ongoing diplomatic and deterrence efforts" in response to Russia's actions, " including their readiness to impose severe consequences and to reinforce the defensive posture on NATO’s eastern flank."

Biden spoke hours after Russia announced that some units participating in military exercises near Ukraine’s borders would begin returning to their bases. Russian President Vladimir Putin earlier Tuesday said Russia was ready for talks with the United States and NATO on military transparency, missile deployment limits and other security issues.

But Biden continued to express skepticism about Russia’s intentions. Biden warned again that if Russia invades Ukraine the U.S. “will rally the world to oppose its aggression.”

Putin said he doesn’t want war and would rely on negotiations as he presses his demand for the West to halt Ukraine’s bid to join NATO. At the same time, he didn’t commit to a full pullback of troops, saying Russia’s next moves in the standoff will depend on how the situation evolves.

Speaking after meeting with German Chancellor Olaf Scholz, Putin said the West agreed to discuss a ban on missile deployment to Europe, restrictions on military drills and other confidence-building measures — issues that Moscow had put on the table years ago.

He said Russia is open to discuss “some of those elements,” but added that it would only do that “in complex with the main issues that are of primary importance for us.”

Asked if there could be a war in Europe, Putin said Russia doesn’t want it but said Ukraine’s bid to join NATO posed a major security threat to his country.

While Scholz reiterated that NATO’s eastward expansion “is not on the agenda -- everyone knows that very well,” Putin retorted that Moscow will not be assuaged by such assurances.

“They are telling us it won’t happen tomorrow,” Putin said. “Well, when will it happen? The day after tomorrow? What does it change for us in the historic perspective? Nothing.”

He went on to argue NATO expansion violates the principle of the indivisibility of security enshrined in international documents.

“We want to solve this issue now as part of negotiation process through peaceful means,” Putin said. “We very much hope that our partners hear our concerns and take them seriously.”

Scholz also said diplomatic options are “far from exhausted,” and praised the announcement of a troop withdrawal as a “good signal,” adding: “We hope that more will follow.”

The Russian Defense Ministry released images of tanks and howitzers rolling onto railway platforms and more tanks rolling across snowy fields. It did not disclose where or when the images were taken, or where the vehicles were headed, other than “to places of permanent deployment.”

Russian forces continue to threaten Ukraine along the eastern border and from the Black Sea Crimean peninsula that Moscow seized from Ukraine in 2014, the year when it also backed a separatist insurgency in the country’s east. More Russian troops loom over Ukraine in Belarus, where they were deployed for sweeping joint drills.

NATO Secretary-General Jens Stoltenberg said that “so far, we have not seen ... any signs of reduced Russian military presence on the borders of Ukraine,” adding that the alliance wants to see a “significant and enduring withdrawal of forces, troops, and not least the heavy equipment.”

Ukraine expressed skepticism about Russia’s statements on the pullback.

"In this dark hour, we are sending a bipartisan message of solidarity and resolve to the people of Ukraine, and an equally clear warning to Vladimir Putin and the Kremlin," the group – which includes Senate Majority Leader Chuck Schumer, D-N.Y., and Minority Leader Mitch McConnell, R-Ky. – reads.

"Should Vladimir Putin further escalate his ongoing assault on Ukraine’s sovereignty, Russia must be made to pay a severe price," they continued. "We are prepared to fully support the immediate imposition of strong, robust, and effective sanctions on Russia."

"Make no mistake: the United States Senate stands with the people of Ukraine and our NATO allies and partners most threatened by Russian aggression," the group wrote. "Our troops stand ready to reinforce the defenses of our Eastern European allies and we are prepared to respond."

"The international order established in the aftermath of World War II has not faced such a grave threat since the Cold War," the bipartisan senators concluded. "This order, which protects the sovereignty and territorial integrity of nations, has enabled an unprecedented era of of peace and prosperity for the United States and its allies. Unfortunately, Russia is threatening this system, and the United States is prepared to meet this challenge with bipartisan and unified resolve."