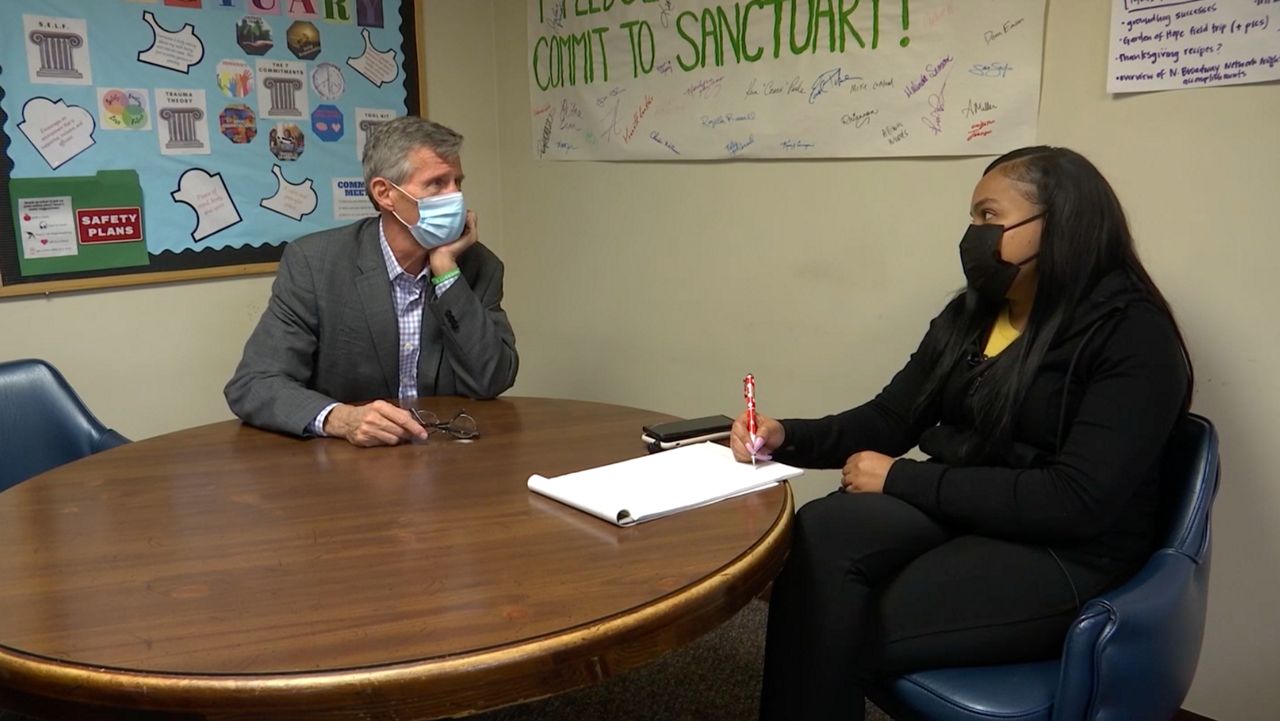 Earl Pike and Sharena Zayed are among residents in Slavic Village who are concerned about the neighborhood being in the running for a new county jail. (Ryan Schmelz/Spectrum News 1)

CLEVELAND — Residents in one Cleveland neighborhood are raising concerns about the potential for a new jail to be built in the area.

Broadway-Slavic Village is one of the oldest neighborhoods in Cleveland, but during the 2008 housing crisis, it was considered, and sometimes unfairly called, ground zero for foreclosures.

But many still have hope.

“And we’re doing everything we can to engage, unite and bring it back,” said Sharena Zayed. “This is really just counterproductive to all the work we’ve been doing within the last few years.”

Zayed has lived in the neighborhood for six years. She operates North Broadway Network Leaders, and as a community advocate, she’s plenty aware of the problems.

She said those living in the neighborhood have heard the county is considering a lot in the area for the new county jail. The county hasn't released an official list of potential locations yet, but Zayed isn't happy her neighborhood might be on the list.

“Honestly, I just don’t want it here. I don’t want to live two blocks away from a jail. I just don’t,” she said. “When I purchased my home, there was no jail. I would like to keep it that way. And it think it’s necessary. We definitely need it, but I don’t understand why it has to be so far away from the judges anyway.”

Zayed went to the proposed lot, just down the street from a major housing development currently under construction.

“I didn’t realize it was this close,” she said. “That’s very disturbing. Just actually being here, seeing how close it is to my house, like, I can’t believe it. I can’t see anybody wanting to move into those apartments, it being that close.”

Earl Pike is the executive director of University Settlement, which provides services to those in Broadway-Slavic Village. He said the lack of community input isn’t the only concern, but also what the jail would do to the neighborhood, such as added traffic.

“The problem is not returning citizens. The problem is returning without any plan for how that’s going to work,” said Pike. “So you can’t just build a jail four to five blocks from here, release prisoners all the time, have no real plan for how that’s going to work, and the context of the community, add traffic patterns and add jobs that aren’t necessarily the kind jobs that we need to really build the community and claim that successful.”

At a press conference, the Boys and Girls Clubs of Northeast Ohio said it doesn’t support the idea of a new jail being built in Slavic Village.

“Being a resident just within this neighborhood, working here with the kids that we’re working with, by them seeing that in the neighborhood, it’s like a forecasting for their future to come,” said Joseph Greathouse, Director of the Broadway Club.

And those who’d be impacted, like Zayed, are continuing to advocate to keep the jail out of her neighborhood.

“There are places that it can go that it won’t affect residential areas,” she said. “We are not trying to make our problems somebody else’s. Like, put it where it won’t affect people and how they live their life.”