By Jennifer Conn Ohio
SHARE
AKRON, Ohio – The city’s last cobbler will close in October, after nearly 30 years of serving the region from a tiny shop on the strip in the Highland Square neighborhood.

Opening Highland Shoe Repair for business on Oct. 8, 1993, the cobbler, Bob Ferguson, has never taken credit cards, because his early financers assumed the business would fail, he said.

Now, 28 years later, he seems a bit surprised when he ponders how time has flown.

“It's amazing, considering the fact that I never worked, neither in the army nor the time I put into college, a combined four years, at any one place before,” he said.

Ferguson didn’t aspire to be a shoe repair man, or even a business owner, he said. And he’s quick to point out that he repairs shoes. He doesn’t make them, so referring to him as a “cobbler” is technically incorrect.

He graduated from Ellet High School in 1975 at 17, and went to work at FedEx. In 1983, Ferguson enlisted in the army, serving until 1986 at Fort Richey, Md. His inactive status expired three weeks before the start of Desert Storm, he said. 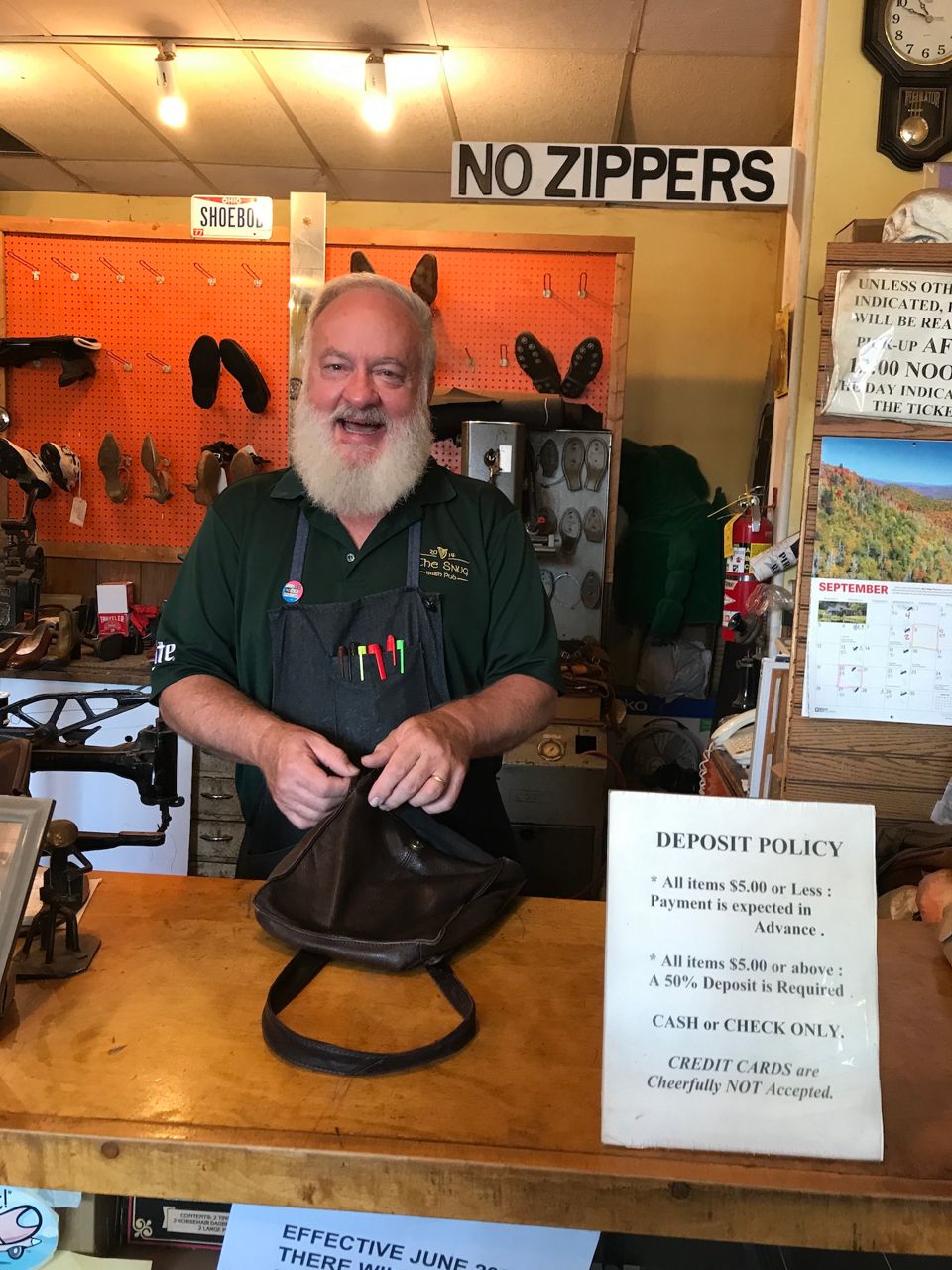 Before and after serving, he attended Kent State University for studio art, and was an editorial cartoonist for the Daily Kent Stater.

He met his wife, Pat, on a trip to Jamacia hosted by FM rock station WMMS. They married, and in 1985 had their daughter, Christine.

With a new family, being a nontraditional student wasn’t working, he said.

“I needed to start feeding my family, not my ego,” he said. So, he got work as a pizza delivery driver at a mom-and-pop business that provided a delivery vehicle. “I literally bought my house on delivering pizza."

To make ends meet, he picked up seasonal work at Sears at Chapel Hill Mall in Akron. During his lunch break one day, he saw a help-wanted sign at Shoe Fixers, offering full-time work with benefits, a rarity in 1990, he said.

“I went in and told the guy, ‘I don’t know a damn thing about shoe repair, but I can learn anything,’” he said. He then went back every day until he was hired. 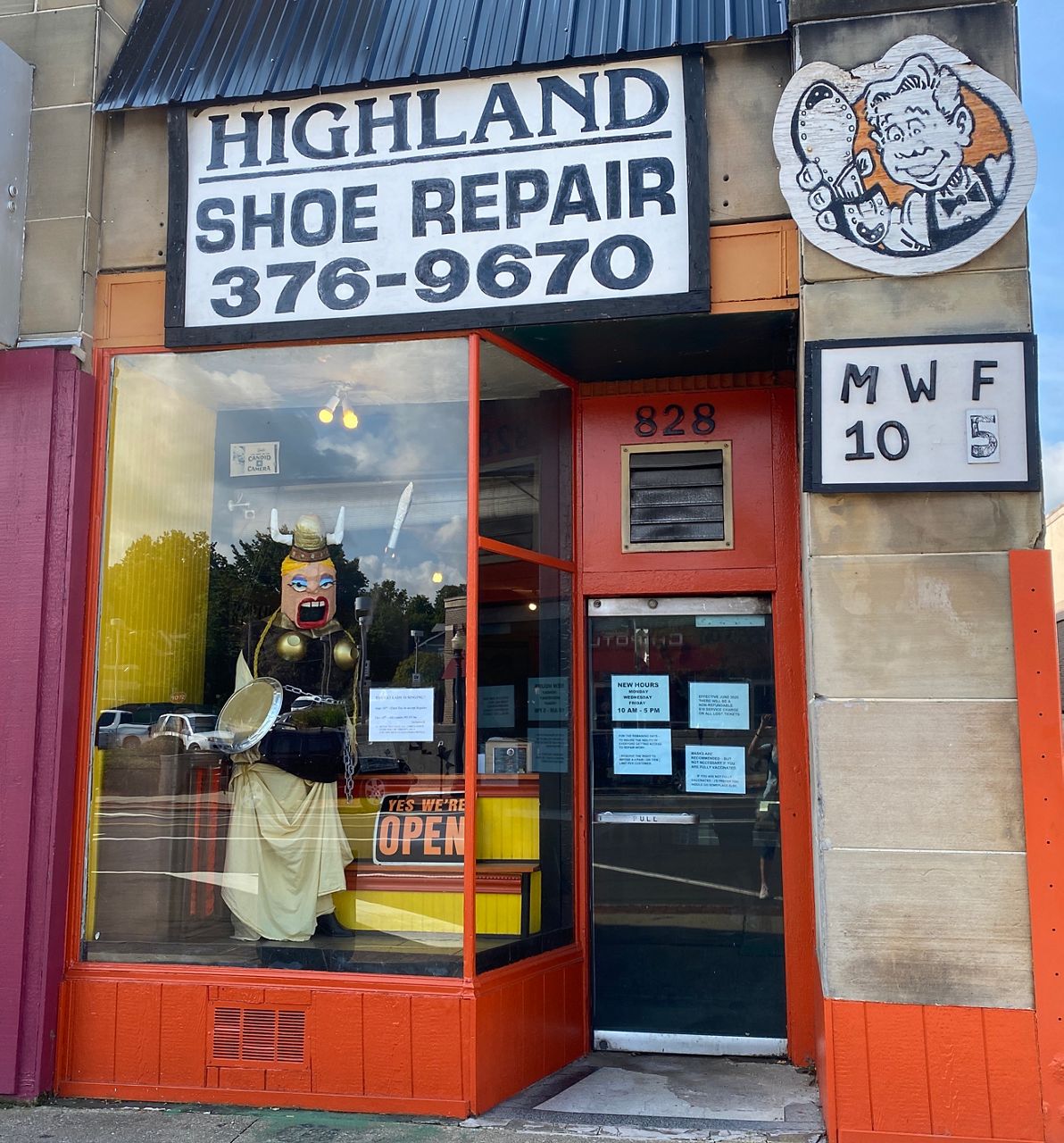 The pay covered insurance for his family, but not much more so he continued delivering pizza, he said.

When Shoe Fixers opened another location, Ferguson was offered a management role. He accepted, as long as they paid him enough to stop working his second job, he said, and they agreed.

But up-selling keys and other merchandise the shop offered bothered him.

“If they like what I’m doing, they’ll come back,” he said. “But if I shake them by the ankles to get all their loose change, they’ll never come back again.”

At Shoe Fixers, Ferguson learned repairing shoes wasn’t that tough, and he liked the work.

“You’re actually doing for somebody something they wanted,” he said.

Opening his own shop, Ferguson said he’s made a point to prioritize people in need, like those wearing orthopedic shoes, and he’s never accepted a “tip” to bump customers out of line.

Still, Ferguson said he never adhered to the adage “the customer is always right.”

“No,” he said. “They walk through the door. They've given up and relinquish control to me.”  He likens each job — the approach, the time it takes and the cost — to gun slinging.

The shop is packed with tools and big pieces of equipment he’ll likely scrap, he said. Shoes and shoe-parts hang on pegs.

The entryway is lined with photos either with Ferguson or autographed, of his favorite actors, TV personalities and musicians — from Chrissie Hynde and the Black Keys to Jaime Lee Curtis and Barbara Eden. Local personalities Big Chuck, Hoolihan and Little John are featured as well.

The stand-out feature of the shop is the front window where he creates eye-grabbing tableaus using a mannequin he saw outside a local antique store. Holidays, movies, political statements and performers all have been subject to Ferguson’s interpretation in the shop window.

One Halloween, the mannequin wore a catsuit Ferguson later gave to Hynde as a birthday gift. Another, with Lady Liberty wearing a bag over her head during Donald Trump’s early term, elicited threats of bodily harm, and later arson. 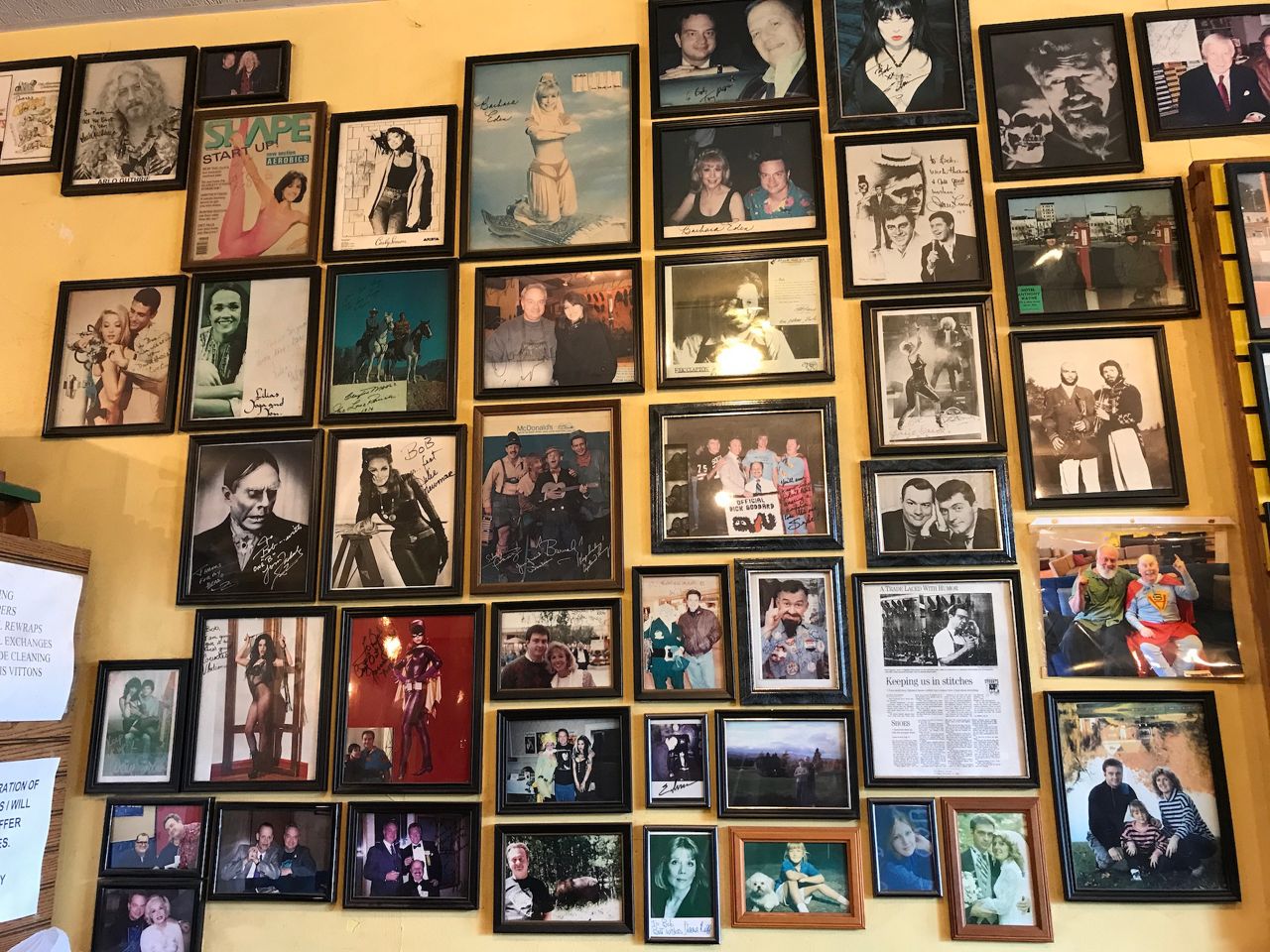 Following those threats, the late Councilman Rich Swirsky organized a small rally for Ferguson, drawing about 100 locals carrying signs of support for the repair shop, and its windows, one February night. The antagonist never surfaced to set the promised fire.

“There's no glitzy way to advertise,” he said. “So if I use things that are topical, political, holiday-related, movie-related, people look at this window. And that wrinkle in the gray matter doesn't go away.”

He can easily identify his favorite photo on the wall as the one of he and Hynde outside the repair shop looking toward the street.

His favorite window? They asked Picasso that about his paintings, he said.

“The next, unfortunately, there isn't going to be one,” he said. “But everything comes to an end. And, if nothing else, the best thing to these windows, is the point of being missed after they're gone. I don't know if they'll miss me more than they'll miss the windows.”

Highland Shoe Repair will be open for pick-up of existing-repairs only, through Oct. 15. Bring your ticket, or you’ll have to give Ferguson time to dig through the shop looking for your footwear, in which case, he said he’ll call when he finds it.