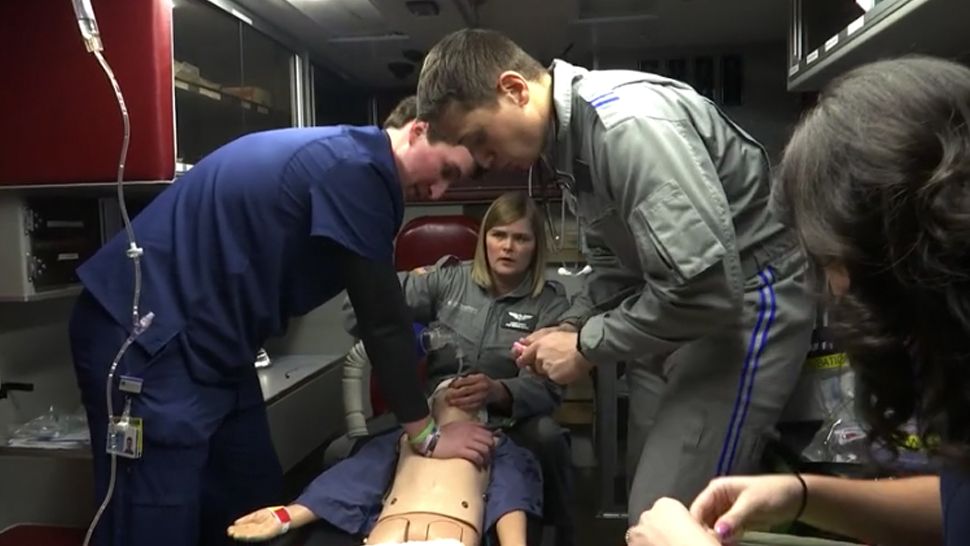 And the university is doing that through helicopter and ambulance simulators.

Mario Manacci is a part of a team inside the ambulance simulator.

"We’ve got a 5-year-old male who’s been ejected from a car during a high-speed rollover MVA, so we’re working on stabilizing his airway, working on his breathing."

This scenario isn’t real life, but it’s as close to real as possible for student Lauren Turner.

"I think we have an opportunity that no one else has because we have the simulator here," said Turner.

Instructors are able to adjust the vitals of the victims on an iPad — in this case, a 5-year-old child the students are trying to save.

"Heart rate you can change, blood pressure you can change, this is as close as you’re going to get to actually doing it, and the amount of times you’re going to be involved with a child that’s thrown from a car that is in this type of situation, it’s something that doesn’t happen every day. So, this is something we can create every day if we want to," said Kevin Andrysek, an acute care nurse practitioner at the Cleveland Clinic.

But the simulations don’t stop with the ambulance.

Tom Baum is the helicopter simulation operation specialist and manager.

I’ve been in a real helicopter, but I had never been in a simulator, so this is a unique experience for our learners," said Baum.

Students, instructors and clients are able to watch the simulation on a projector screen to learn and improve their skills.

Manacci, a 2019 graduate of the program, says this gives him the experiences a textbook can’t.

"All that stuff’s an important foundation to have, but actually having the opportunity to put those skills into practice is where I think it makes the delineation of who can become a really great clinician and who’s going to be just ok,” Manacci said.

The program is helping newer students like Samantha Colla take her career to the next level.

"I’ve been a nurse for almost six years, but I’ve had more experience and learned more in the past year and a half than I have probably in my almost six years of a nursing career,” said Colla.