To boldly go: William Shatner blasts into history as oldest person in space

He wasn’t aboard the starship Enterprise and this "trek" lasted just minutes, not years, but “Star Trek” icon William Shatner on Wednesday boldly conquered the final frontier in real life.

The 90-year-old actor best known for playing the role of Capt. James T. Kirk and three other crew members ascended to the edge of space aboard Jeff Bezos’ Blue Origin rocketship. In doing so, Shatner became the oldest person ever to fly to space.

“What you have given me is the most profound experience,” Shatner told Bezos just after he disembarked from the spacecraft. “I'm so filled with emotion about what just happened. It's extraordinary. Extraordinary. I hope I never recover from this. I hope that I can maintain what I feel now. I don't want to lose it. It's so so much larger than the me or life.”

Shatner, who said he was "overwhelmed," waxed philosophical after the flight. He compared the blue skies above earth to life and comfort, and the blackness of space to death.

“What I would love to do is to communicate as much as possible the jeopardy, the moment you see the vulnerability of everything,” he said. “It's so small, this air, which is keeping us alive. (It) is thinner than your skin. It's a sliver. It’s immeasurably small when you think in terms of of the universe.

"You look down, there's the blue down there and the black up there ... there is Mother Earth and comfort, and there is, is there death?" Shatner asked. "I don't know, but is that death? Is that the way death is?

"It was so moving, this experience," Shatner continued. "It was something unbelievable." 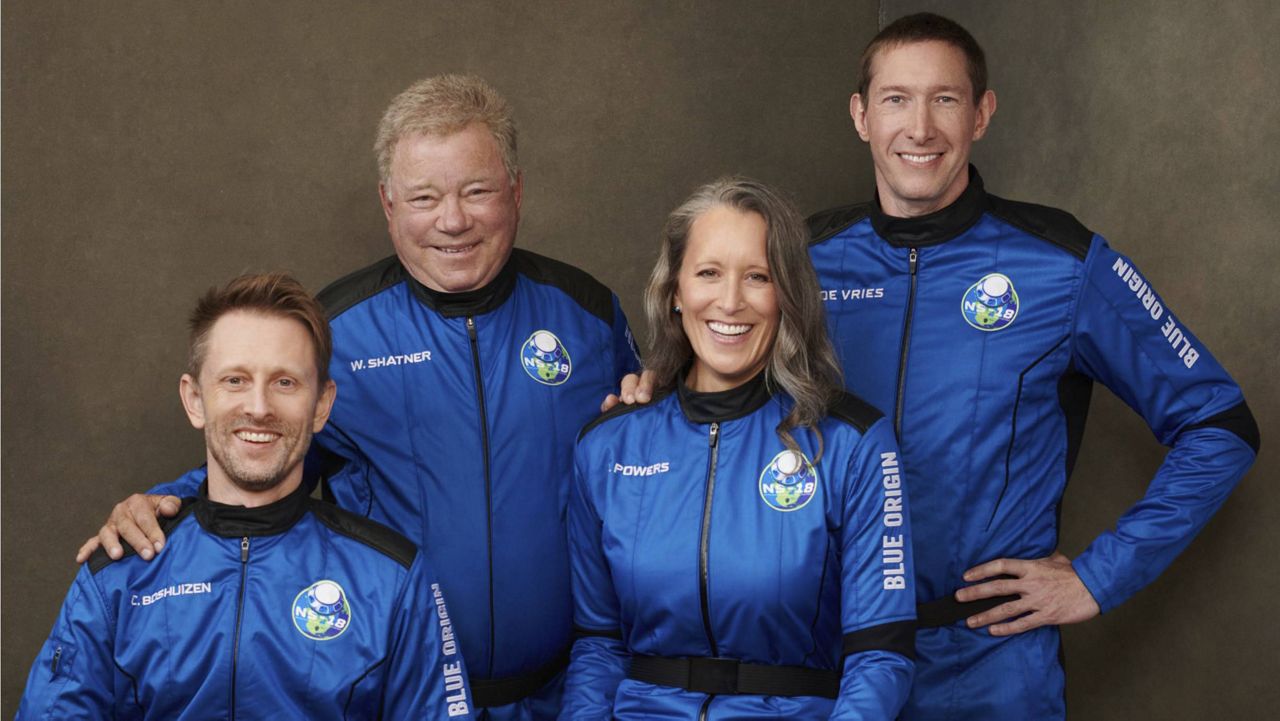 Shatner said that "everybody in this world needs to do this," adding: "It would be so important for everybody to have that experience through one means or another."

The flight, which launched from the West Texas desert, traveled more than 66 miles high just beyond the Kármán Line, the internationally recognized boundary of space. The spacecraft reached 2,200 mph before the booster and capsule separated, giving the newly minted astronauts a few minutes of weightlessness.

The booster successfully landed on its pad about 7½ minutes after takeoff, and the capsule parachuted down with the crew into the desert about three minutes later.

It was the second human flight to space for the New Shepard rocket. In July, it launched Bezos — the founder of Blue Origin and Amazon — along with his brother, Mark; Wally Funk, an 82-year-old pilot who decades earlier was denied her dream of traveling to space because she was a woman; and 18-year-old Oliver Daemen, whose father, the CEO of a Dutch real estate private equity firm, paid for his ride following a public auction.

In the minutes before the launch, Shatner, Powers, Boshuizen and de Vries were read messages of encouragement from the previous Blue Origin flight.

“I can assure you that it will be better than your best imagination,” Daemen, the youngest person to travel to space, said in his message.

In becoming the oldest person in space, Shatner broke the record set by Funk during that flight.

Shatner starred as Kirk in 79 episodes of the 1960s TV series “Star Trek” and later in seven movies in the sci-fi franchise.

"Star Trek" fans reveled in the opportunity to see Shatner boldly go where no star of American TV has gone before.

“This is a pinch-me moment for all of us to see Capt. James Tiberius Kirk go to space,” Blue Origin launch commentator Jacki Cortese said before liftoff. She said she, like so many others, was drawn to the space business by shows like “Star Trek.”

Bezos is a huge “Star Trek” fan — the Amazon founder had a cameo as an alien in one of the later “Star Trek” movies — and Shatner rode free as his invited guest.

Bezos himself drove the four to the pad, accompanied them to the platform high above the ground and cranked the hatch shut after they climbed aboard the 60-foot rocket. A jubilant Bezos was there to greet them when the capsule floated back to Earth under its brilliant blue-and-red parachutes.

“Hello, astronauts. Welcome to Earth!" Bezos said as he opened the hatch and was embraced by Shatner.