CINCINNATI — Freestore Foodbank is asking for support from the greater Cincinnati area this holiday season as the nonprofit combats rising food costs and increased demand to ensure local families have healthy, nutritious food on their table this winter.


Freestore is the largest emergency food and services provider to children and families in greater Cincinnati. The organization distributes 37.7 million meals per year to low-income individuals and families spread across 20 counties in Kentucky, Ohio and Indiana.

Those numbers have only continued to climb over the last few years because of pandemic-related economic factors and the skyrocketing cost of food.

About 415 families went through Freestore’s Liberty Street Market in Over-the-Rhine every day leading up to the holiday, Reiber said. Teams of staff and volunteers distributed more than 11,000 turkeys to families through its OTR site or one of its large-scale food distribution centers.

Reiber shared that 75% of the families currently benefiting from the Freestore’s large-scale food distributions hadn’t used it prior to the pandemic.

“When you think about who has gotten over the past three years — dealing with COVID-19 and business closures, furloughs and layoffs. Now they’re dealing with high prices,” he added. “It’s really rough out there for a lot of people.”

‘We’re not talking about lobster tails and filet mignon’

The U.S. Department of Labor’s Consumer Price Index reported in November that the food-at-home index increased more than 12% since October 2021. The index measures the cost of food purchased from places such as grocery stores to prepare at home.

Feeding America, the nationwide network of food banks and food pantries, has seen an increase in people relying on food banks. Over 53 million people relied on charitable food assistance to help put food on the table last year.

“Higher food prices have shocked the budgets of families, seniors and people already struggling to make ends meet. The impact of these higher prices is especially felt with the holidays right around the corner,” Katie Fitzgerald, president and COO of Feeding America, wrote in November.

Reiber noted roughly 50% price jumps in everyday items such as ground beef and peanut butter. A gallon of milk, he said, is twice as expensive as it was in the past.

“Families want to provide a ham or a turkey for a family get-together or maybe a pumpkin pie, but they’ve all gone up so much that they’re now out of reach for many people,” Reiber added. He mentioned there’s a nearly 17% increase for uncooked poultry other than chicken, which includes turkey.

“Those aren’t, by any means, extravagant things. It’s not like we’re talking about shrimp and lobster tail and filet mignon. You’re just trying to buy the basics — and for a lot of families right now, those things are even out of reach right now.” 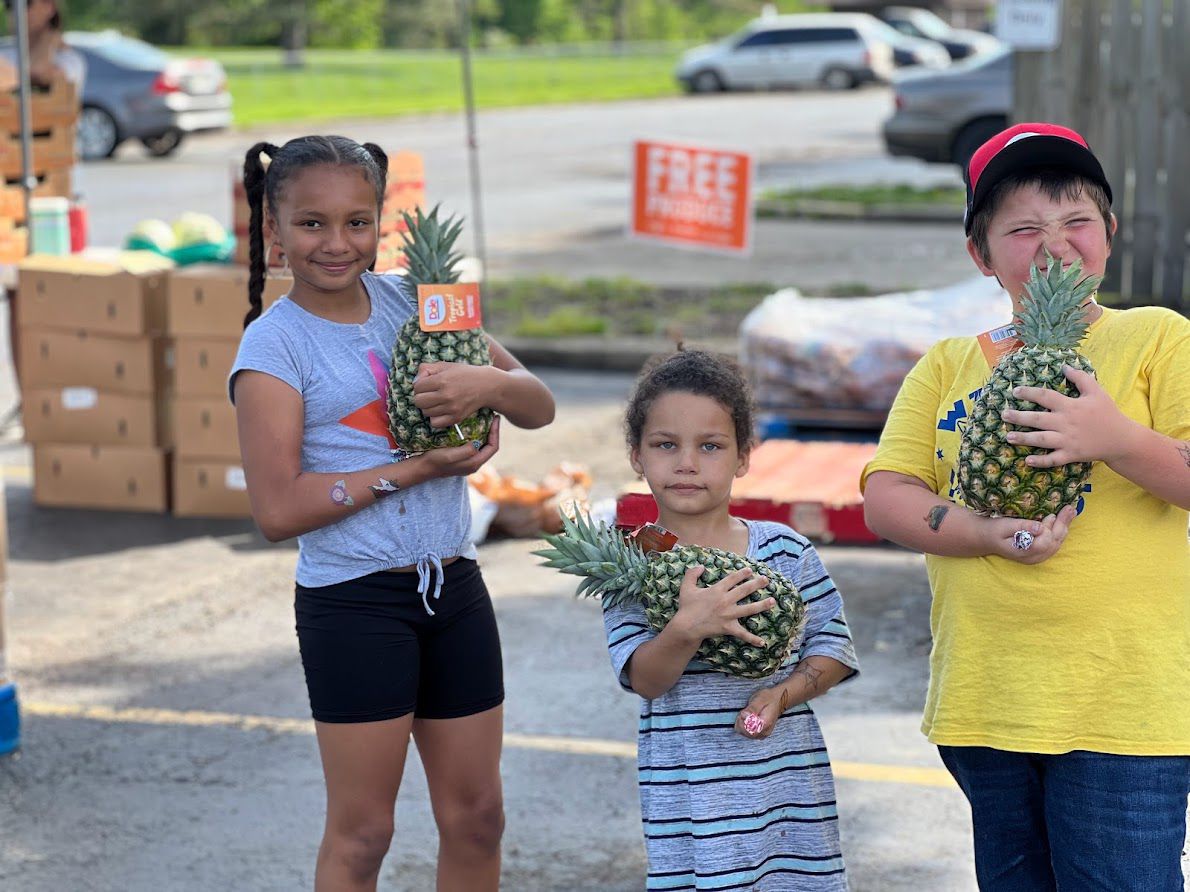 Fitzgerald stressed that the higher prices aren’t only affecting families. They’re also affecting the buying power of the pantries and food banks trying to help them.

One of them is IPM Food Pantry, which serves about 50 partners — schools, nonprofits, churches, etc. — in more than 31 zip codes in the eastern portion of Southwest Ohio.

“Hunger is a persistent and growing problem in our community, with poverty as the root cause. Recent economic challenges have only made it worse,” Hart said.

One of IPM’s pantry clients is Deborah Hernandez of Amelia, Ohio. The 61-year-old called IPM a “light in a dark place.”

“I don’t know what I would do without (them),” Hernandez said.

IPM receives about 80% of its food from the Freestore. The pantry either pays the Freestore a nominal amount for those items, or they receive it as a donation through Freestore’s partnership with Feeding America.

Freestore provides fresh produce to IPM at no cost, which is big for its clients, Hart said. She mentioned that many of the families and individuals they serve have limited access to transportation or live in areas with very little access to healthy food options.

IPM also offers mobile food pantry or pop-up pantry events to serve clients who don’t have reliable transportation. IPM has served 69% of its clients through mobile or pop-up food pantries. They’ve had 70 events so far this year in four different counties. Freestore staff drive to the pop-up locations with produce and the other food items IPM ordered, Hart said.

“We could not sustain (our operations) without the relationship with Freestore Foodbank,” she added.

IPM can’t get all of its food items through Freestore, at least not all the time. Some harder-to-get perishable items, like eggs and meat, are purchased at traditional grocery stores or through a food brokerage. In those instances, the food pantry might get a “small discount,” Hart said, but not much compared to rates at Freestore.

She said IPM’s grocery bills have more than tripled this year.

“It’s a perfect storm,” Hart added. “Our clients face higher grocery bills, so the need to use a food pantry rises. But at the same token, our costs are going up because we’re spending more money to buy food.”

A community call to action

Reiber praised the support Freestore has received from the Tri-State community over the years.

The organization has 125 team members, but they couldn’t make things work without the 14,000 volunteers who commit close to 100,000 hours of service every year, said Reiber, who’s been with Freestore since 2011.

Reiber tends to see a large, and appreciated, uptick in volunteers during the holidays when many people have time off work.

There are individuals and families, but there are other organizations and corporations who volunteer their time as well. One of those is Rhinegeist Brewery, a neighbor to the food bank in OTR.

The brewery had a group of seven employees who spent time at the Liberty Street location over Thanksgiving week. 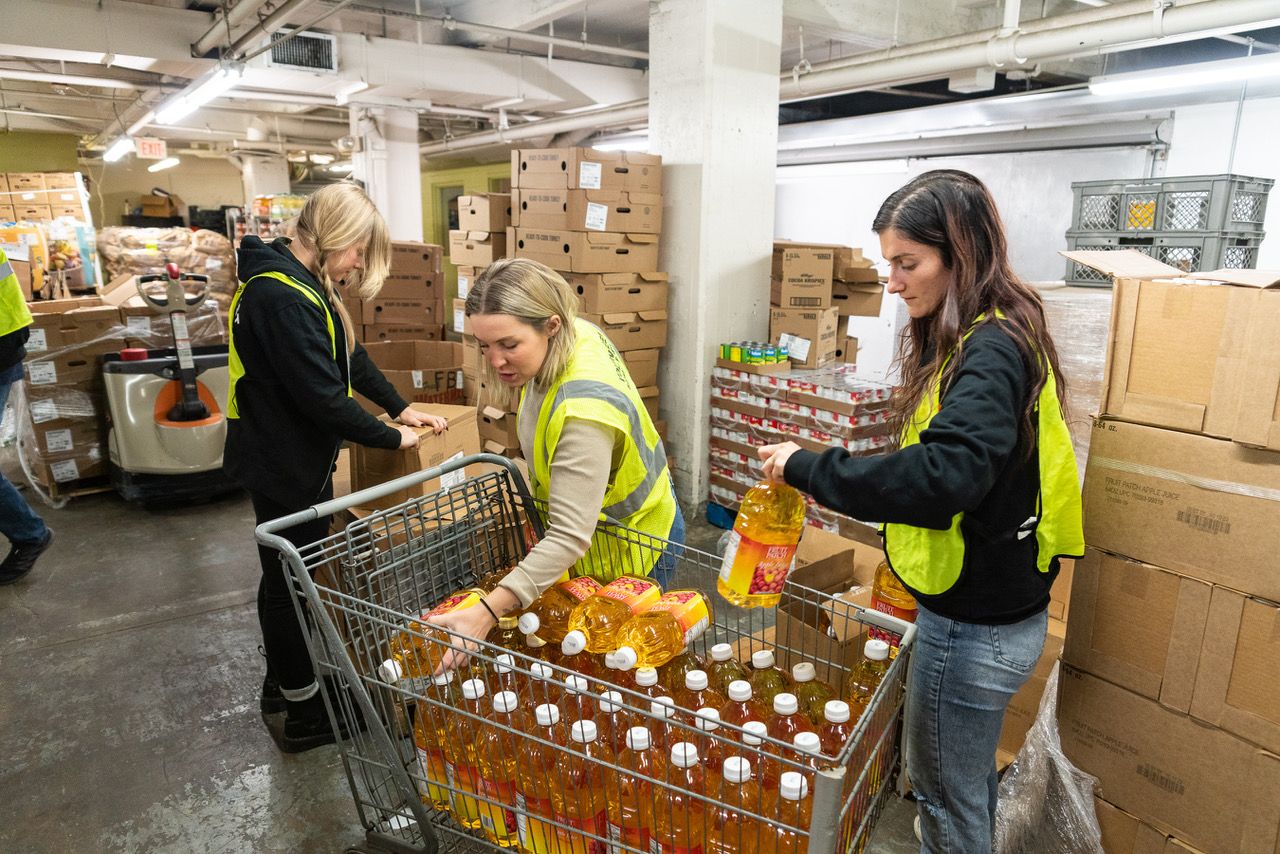 The team stocked shelves and unpacking pallets as shoppers selected items while working with the Freestore team behind the scenes to balance incoming and outgoing food, said Beth Boswell, Rhinegeist’s community engagement and partnerships coordinator.

“The most eye-opening part of this experience was the sheer amount of food distributed even in the small pocket of time that we spent at the Foodbank,” said Boswell, noting that a group of 12 Rhinegeist employees is heading back there next week.

While Reiber praised the volunteers for their efforts, he was not shy to admit that the biggest need right now is financial.

“At Freestore, we continue to see the impact of higher prices on all the food that we need to purchase to restock the shelves of our 600 pantries,” he added. “Financial support during this critical time will make the biggest impact and allow our team to secure essential food items to help the families that we serve feed their families.”

On Giving Tuesday, Freestore met its fundraising goal of $800,000, Reiber said. The average donation was $230, and they also had some sponsors and what he called “second helping” donors who matched those donations.

“That sounds like a lot of money, and it is, but that meets about two-thirds of our needs on a monthly basis,” Reiber said. “We’re trying to run very fast just to stay in the same place.”

A unique approach some people are using this year is a virtual food drive, Reiber said. To take part, a person sets a fundraising goal on social media and lets their social channels know the money will go toward the purchase of a particular food item. Freestore uses its purchasing power to get a better deal on the item.

The reason Reiber’s encouraging people to do virtual food drives rather than buying and dropping food, he said, is because doing so would put additional stress on the supply chain.

Reiber emphasized that each dollar Freestore raises is the equivalent of three meals.

For more information, including how you can donate and volunteer, visit the Freestore Foodbank website.