Chubb-Hunt combo gives Browns option to use against Jets

CLEVELAND (AP) — Standing to the side along with Kareem Hunt while waiting to speak to reporters this week, running back Nick Chubb quietly chanted something that could grow louder in upcoming weeks for the Browns.

After pairing Chubb and Hunt in the same backfield for several plays during Cleveland’s 26-24 win at Carolina last week, Browns coach Kevin Stefanski, who seldom used the package in the past for a variety of reasons, hinted at deploying it more often as this season unfolds.

“Moving forward, definitely could see something like that growing,” he said.

Stefanski gets his next chance Sunday against the New York Jets (0-1), who are expecting the Browns (1-0) to again lean heavily on their rushing attack after rolling up 217 yards against the Panthers.

With one of the NFL’s best offensive lines and two talented backs, the Browns know what works for them.

“They’re going to try to absolutely run the ball, like they always do and they do it at a high level every week,” Jets defensive coordinator Jeff Ulbrich said. “If we don’t stop the run and we don’t play the run well, we’re going to have a rough day.”

The Jets shut down Baltimore’s running game last week, holding the Ravens to just 63 yards and containing dynamic quarterback Lamar Jackson, who only got 17 on six attempts.

This week’s challenge will be trying to stop Chubb, who rushed for 141 yards against Carolina, along with Hunt, who added 24 on the ground and scored two touchdowns — one rushing, one receiving.

Cleveland’s 1-2 punch is tough enough when the Browns are using Chubb and Hunt to complement each other. On the field at the same time presents a defense with a whole different set of problems. 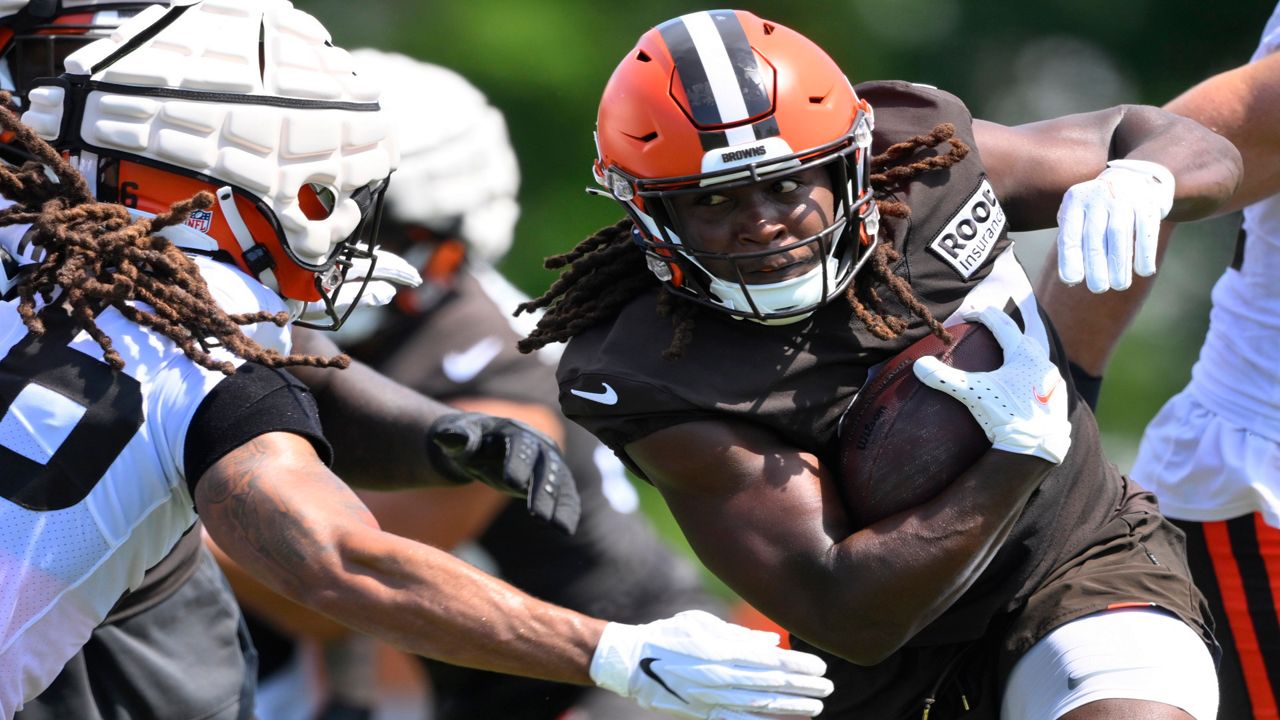 “They’ve got the ability to do the dirty work inside and push the pile and do the hard running, but they also have the ability to finish runs because they both have that explosiveness.”

While knowing the Chubb-Hunt backfield’s potential is high, Stefanski isn’t ready to fully commit to it.

Hunt said Chubb makes him play better and vice versa. There’s not a competition between them, rather a commitment.

“Kareem brings a lot of energy to the team, a lot of intensity and I feed off of that,” Chubb said. “When Kareem’s in there, he’s running the ball hard and it gets me going, so I enjoy playing with him.”

They’re ready to share the wealth, and a chant if necessary.

“What is it? Chunt?” Hunt asked. “I mean, that’s all right, whatever they want to call us. But that’s Nick, I’m Kareem.”

So will they be doing interviews as a team going forward?

“I guess so,” Hunt said. “They say we’re better together.”

Jets coach Robert Saleh made headlines this week when he said he was “taking receipts” on critics of the franchise. And there were plenty after the loss to Baltimore.

He later clarified he wasn’t taking shots at fans or reporters. Rather, he was caught “in a passionate moment” defending his team.

“This is not the same old Jets, but until we win, until we prove it, which is on us as coaches and on us as players, the shots will keep on coming,” Saleh said. “So we welcome them. Keep bringing them. It’s not going to change our mission, and that’s to bring this organization and this fanbase a win.”

Joe Thomas was a pillar for the Browns as a 10-time Pro Bowl left tackle.

To his four kids, he’s just dad. His oldest daughter, Logan, recalls his games, not his glory.

“She went to a ton of games when she was little,” Thomas said. “She said, ‘Daddy, the only thing I remember about going to Browns games was sitting on the floor at the stadium and eating peanuts.’”

Thomas will be honored Sunday as the Browns induct him into their Legends club along with Darrel “Pete” Brewster, a two-time Pro Bowler who played defensive end and tight end with the team from 1952-58.

Thomas lives in Wisconsin, but he’s raising his kids to pull for the Browns in the heart of Packers country.

“They’ve got all their Browns stuff when it’s school spirit day,” he said. “They’re the only Browns fans wearing their Browns jerseys, but they do it proudly.”

The Jets made mistakes all over the field in their opener.

Joe Flacco was sacked three times and hit 11 behind a shuffled offensive line that struggled to protect its 37-year-old quarterback. There were two fumbles and several dropped passes. Greg Zuerlein missed a 45-yard field goal and an extra point. Braden Mann averaged just 42.2 yards on six punts, shanking a 20-yarder to set up a Ravens touchdown.

“Just a lot of self-inflicted errors,” said wide receiver Corey Davis, who had a drop. “And we’ve got to eliminate that before we give ourselves a chance.”