Members of the Cincinnati Ambassador program pose for a picture at Washington Park. (Photo courtesy of 3CDC)

CINCINNATI — Cornelius Famble doesn’t meet many strangers in downtown Cincinnati, and when he does, they rarely remain strangers for long.


Famble also knows the area better than pretty much anyone, too. Where to eat, where to hang out, the places that maybe need a little extra TLC.

And he should. It’s his job, after all, and one he enjoys very much. 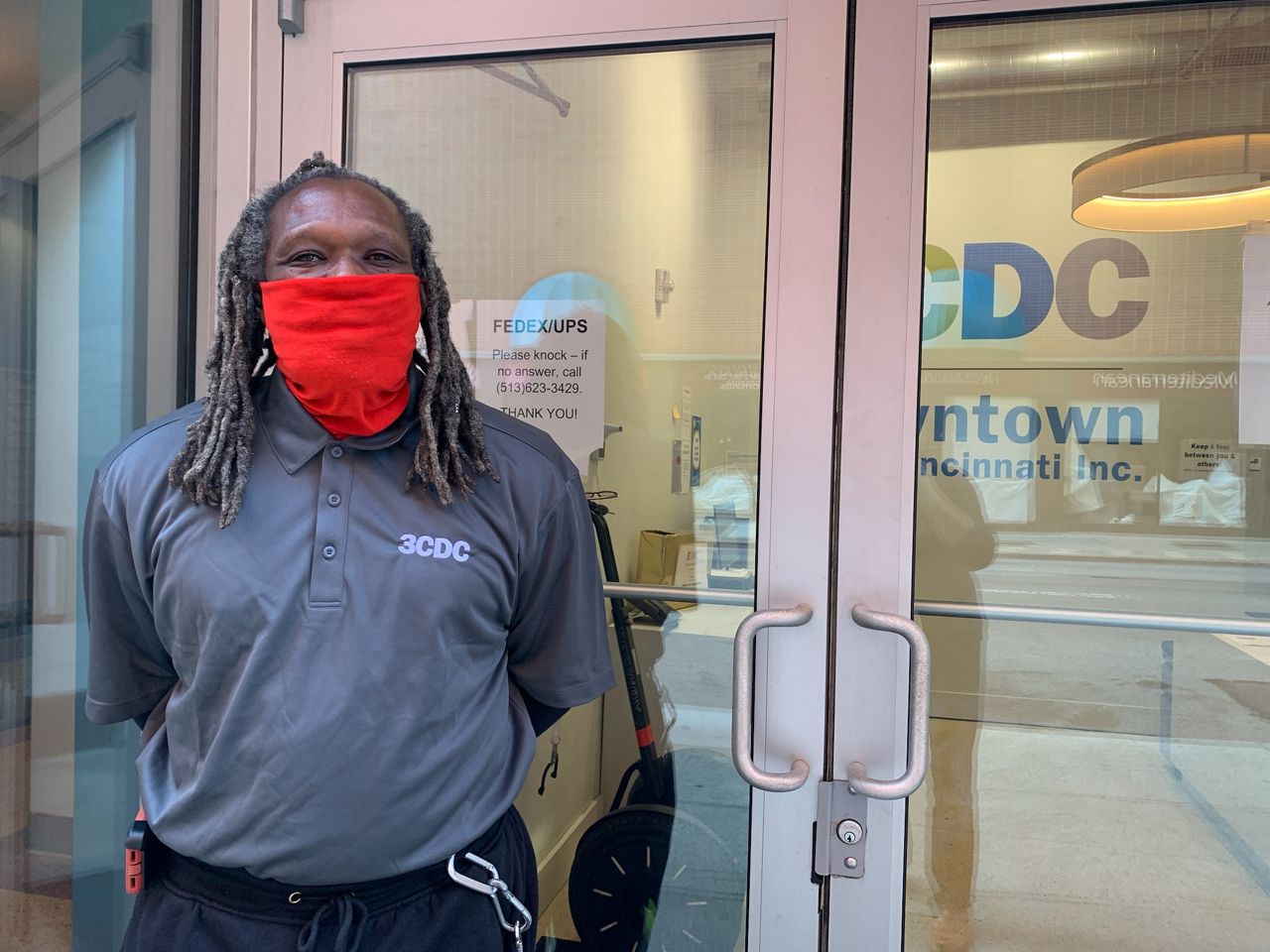 Cornelius Famble has been an Ambassador for more than two years. (Casey Weldon/Spectrum News 1)

Famble is one of Cincinnati’s Ambassadors, a program operated by the Cincinnati Center City Development Corp., better known as 3CDC. It’s the Ambassadors’ job to make downtown Cincinnati — including The Banks, Central Business District and the Over-the-Rhine neighborhood — as inviting as possible to visitors, residents and employees.

Each Ambassador gets trained in aspects of public safety, enhanced cleanliness and customer service. Described as the “eyes and ears” of downtown Cincinnati, the team of a few dozen Ambassadors work in split shifts — some work daytime hours, others at night.

A few Ambassadors drive around during the overnight hours in trucks patrolling the urban core. Not Famble, though: He’s usually on foot.

Famble, 68, takes the bus in from Bond Hill every day. He tries to arrive a couple hours before his shift to give himself time to walk his beat — a quadrant of a few city blocks — and see what’s going on in the neighborhood.

Ambassadors have various daily tasks, but they’ll also receive specific jobs based on calls or emails they receive on their hotline.

Duties may be as simple as power-washing the sidewalk between Race and Vine streets to remove stains or taking care of an overflowing garbage can. They often put down salt and shovel sidewalks during snowy weather.

They’ll also answer questions from visitors, so they feel welcome in Cincinnati.

“It’s usually something about where they should go to eat or if they should head uptown or down to The Banks,” Famble said. “I talk to them for a little bit and try to give them a few options based on what they like.”

It’s not surprising he routinely reaches his fitness goal of 10,000 steps in the first few hours of his shift.

“I usually walk the entire zone just to assess and see what’s needed during that shift,” Famble said.

Always a ‘smile and hello’ for all

Famble’s job isn’t just about helping visitors. Since the program’s creation, downtown Cincinnati has exploded with new residents. One of those people is Jackie Bryson, vice president of the Downtown Residents Council.

“I know it’s not always the most glamorous of jobs, but it’s such an important job at this juncture in our city,” Bryson said. “If we want for people to continue wanting to come downtown and to live downtown, and really kind of take this vibrancy to a whole new level, (the Ambassadors are) one of the major pieces of the puzzle that absolutely has to be there.”

While Bryson appreciates all the cleanup work by the Ambassadors, it’s their presence and local knowledge she appreciates most.

Each Ambassador gets assigned a specific zone within downtown. They work to become familiar with the businesses — restaurants, banks, even the local flower shop — and residents located there. They’ll talk with a few of them each day just to see how they’re doing and if they have any suggestions for improvement. 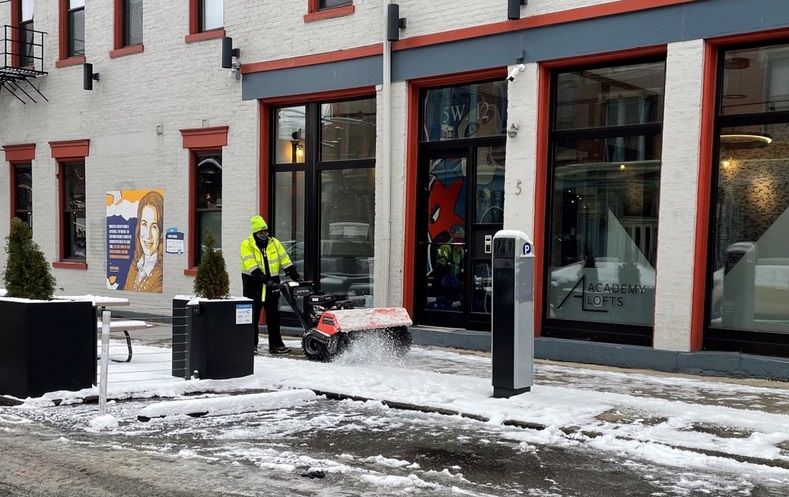 Ambassadors are responsible for a mixture of duties ranging from clearing snow-covered sidewalks to providing public safety assistance. (Photo courtesy of 3CDC)

Because of those relationships, many people now will often come to the Ambassadors first for help.

“From a resident perspective, we just get to know them because we see them on the street and they speak to us and we speak to them,” Bryson said, adding it makes people “feel very, very safe and very confident when they’re around.”

“They are always going above and beyond, from what I’ve seen,” Bryson said. “I’ve never had an Ambassador stop and say to me, ‘that’s not my job.’ They just do it.”

The Ambassadors program began more than a decade ago, formed by Downtown Cincinnati Inc. 3CDC had its own Ambassador program at the time, which covered Fountain Square, Washington Park, Ziegler Park and other parts of Over-the-Rhine.

In recent years, as DCI merged with 3CDC, and a new Special Improvement District was formed in the southern portion of OTR, the size and scope of the program expanded.

Now, the city has Ambassadors who work more or less 24 hours a day from the Ohio River to OTR.

“If we’re having an issue or feeling unsafe or have a problem, we think nothing of calling the ambassador hotline and asking, ‘Hey, you know we’re in a downtown building and we’re seeing this go on and we think somebody needs to check this out,’” Bryson said.

The arrangement is more efficient than using the non-emergency number for Cincinnati police, she added. The Ambassadors can generally respond more quickly because they don’t have other priorities, like more serious 911 calls.

Ambassadors also get trained to handle some emergencies. Those can include someone who is upset or may need medical help.

“You have to be able to discern and assess the situation quickly,” Famble said. Ambassadors learn to identify the symptoms of medical conditions such as a heart attack, seizure and stroke. A common issue they deal with is drug overdoses.

“If you notice or suspect a person is having a medical emergency, your job is to call 911, comfort them and let them know help is on the way,” Famble said.

“It’s about treating people with respect,” he said. “It’s about helping your neighbors.”

One of the most common questions Famble gets from out-of-towners is whether downtown Cincinnati is safe. And the answer is the same every time: “Yes,” he answers without hesitation.

That’s a far cry from when the Ambassador program began. It developed because of civil unrest sparked by a police shooting in April 2001 and the subsequent closing of several businesses in the area.

Statistically, downtown and Over-the-Rhine are much safer than they used to be, but incidents still happen occasionally, and the Ambassadors are trained to respond.

They’ve responded to a few assaults and muggings, Famble said. He recalled one person recently stabbed with a fork near Central Avenue. In that incident, an Ambassador stayed with the victim until paramedics arrived, Famble said.

“We’re out here as much as the police and most of the time we’re closer, so we can get there faster,” he said. “They’ll call the police as well, but they’ll call us because we know they are right outside the door.

“You have to approach each person, whether they have 50 cents or a billion dollars, as though they’re Bill Gates,” Famble added. “At the end of the day, it’s about treating people with respect. They’re all people and they should be treated as such.” 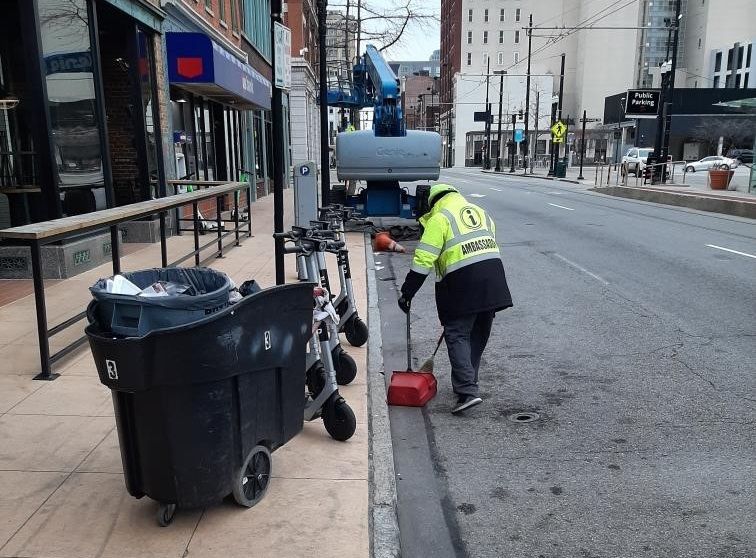 In addition to their other duties, Ambassadors perform regular check-ins with businesses in their designated section. (Photo courtesy of 3CDC)

The Ambassadors aren’t crime fighters, but they work closely with the Cincinnati Police Department.

“They have been absolutely invaluable to what we do around here, no question about it,” said CPD Capt. Doug Wiesman, who leads the Central Business Section at The Banks. “We couldn’t operate down here without them. We just couldn’t.

The Ambassadors have access to Cincinnati Police Department radios. They use the devices to learn about situations they may handle more efficiently than an officer, like someone camping out in a building’s doorway.

“They might not even have to call us, which frees us up to do other things that are important but definitely a lower priority,” Wiesman said. “They allow focus on and respond to more serious situations.”

Procedure is for Ambassadors to call the police if they see a crime unfolding. But in many situations, it’s more about being a “good Samaritan,” Famble said.

“For myself and others, we think about what it would be like in that situation,” he said. “What would you like a person to do for you, if you were in that situation? And that type of thinking makes you want to go the extra mile.”

“We build a rapport with these men and women we meet. We develop trust,” Famble said. “After a while, they become your buddies, your friends.”

The Ambassador program receives support from GeneroCity 513, an initiative aimed at supporting individuals who’ve been driven to panhandling, including those facing unfortunate circumstances like homelessness, addiction and mental health issues.

Developed by 3CDC along with the City of Cincinnati and several social service partners in late 2018. 3CDC brought the program in-house following its merge with DCI in 2019.

Today, 3CDC employs five outreach workers through a partnership with Greater Cincinnati Behavioral Health Services, which allows Ambassadors to connect people with the social service agencies and help they need.

“Any time that another entity can help us out, and it doesn’t require a police response, isn’t that what everybody’s kind of looking for?” Wiesman asked.

“We don’t get locked into a three-hour situation where we are calling social services, waiting for them to drive there,” he added. “We can respond to things that we need to respond to.”

There currently are 43 full-time Ambassadors and 29 people who work part time. The numbers vary based on seasonal needs, and 3CDC is looking to hire more for summer. 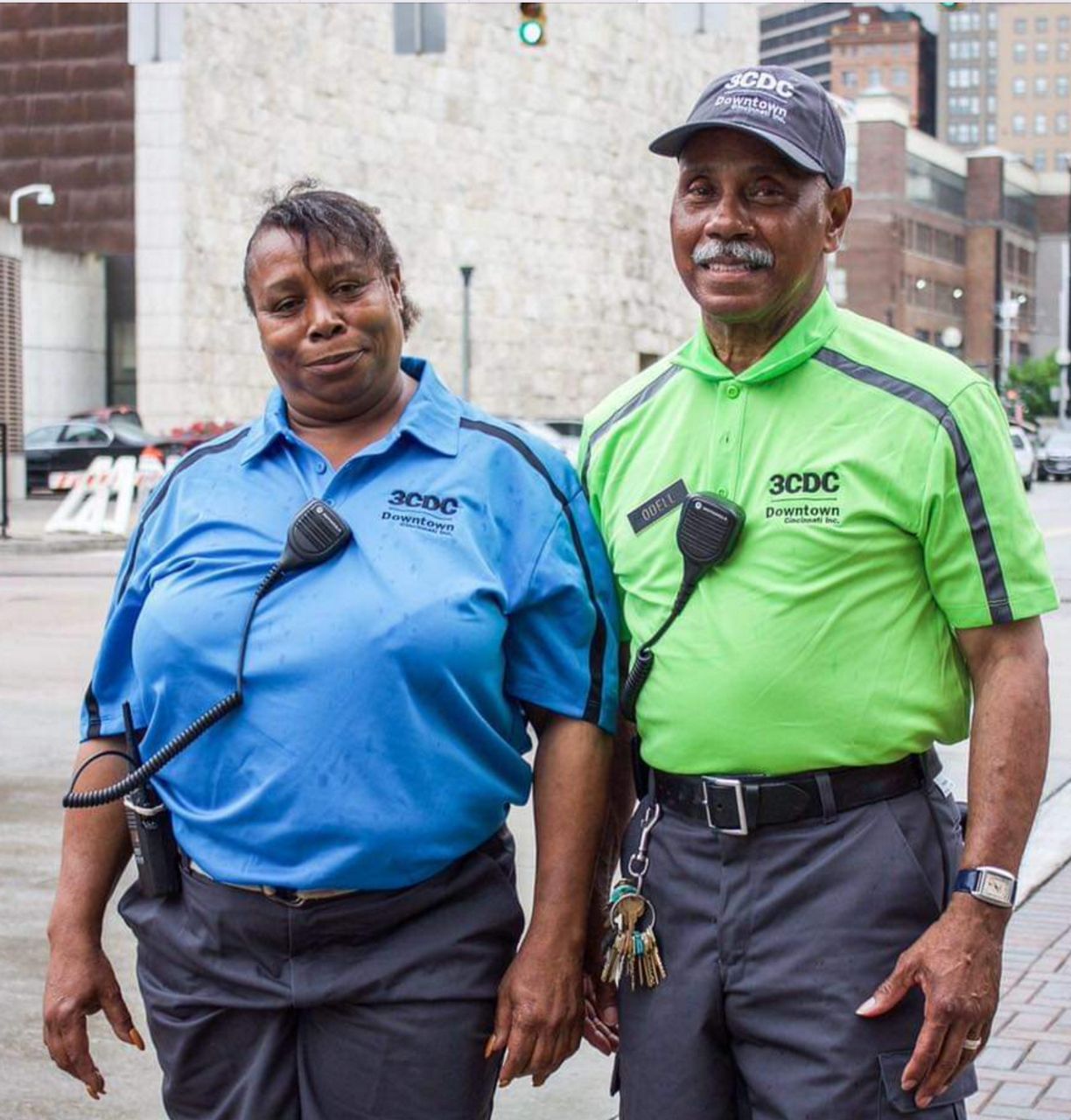 Two of the Ambassadors pose for a picture at The Banks along Cincinnati's riverfront. (Photo courtesy of 3CDC)

Ambassadors come from all walks of life, ranging from retirees to young adults just out of high school. A lot, though, have been through some dark times in their lives.

About 50% of the Ambassadors 3CDC hired last year are so-called “second chance employees,” either people convicted of a crime or facing other legal issues that have made it difficult to find jobs.

The effort began shortly after 3CDC and DCI merged, when the Ambassador program became managed in-house instead of outsourced by the national organization, Block by Block.

David Vissman, a 3CDC vice president, said it wanted to focus more on building stronger connections with the “people we meet every day in the community.”

Hiring people from within the community results in employees who have an “invested interest in the neighborhood,” Vissman said. They work with Over-the-Rhine Community Housing and other organizations to target applicants, but often new hires come through word of mouth.

“We’d have people in the park that were really maintaining it just as well, if not better, then some of our staff and holding people accountable for rules and things like that,” Vissman said. “We’ve hired several of them.”

One of those hires was a woman Vissman would only refer to as “Caroline” — a young woman who lived at the corner of 13th and Race streets. She was a regular at nearby Washington Park, which 3CDC manages.

“Caroline was just a pleasure to see day in and day out,” he recalled. “She was always holding people accountable to rules, and I asked her one day if she wanted a job and she said, ‘yeah I’d love a job.’”

Caroline has been there for more than six years. “She’s one of our really strongest Ambassadors,” Vissman said.

Going into his third year on the job, Famble plans to continue working up and down Cincinnati streets for as long as he’s able.

“I couldn’t be happier,” Famble said. “It’s all about your attitude.”