The outside gates of the Cincinnati Zoo & Botanical Gardens. (Provided: Michelle Peters)

Cincinnati Zoo aims to be leader in conservation and sustainability efforts

CINCINNATI – It should come as no surprise that the Cincinnati Zoo & Botanical Garden has become synonymous with conservation efforts. After all, in 1991 it opened the first facility in the nation dedicated to both animal and plant conservation.


But what people don’t know is the zoo isn’t just focused on preserving species of flora, fauna and wildlife from around the world. They’re just as concerned with the immediate environmental needs of the neighborhoods around them.

Dubbed the “Greenest Zoo in America” in 2010, the Cincinnati Zoo has spent the past three decades at the forefront of environmental sustainability efforts.

“The whole concept of holistic sustainability is about viewing your work as having a positive impact on the overall world around us,” said Stephenie Ritchey, the zoo’s sustainability manager.

Throughout the years, the zoo has enacted a series of so-called “green initiatives” to reduce its impact on the environment. That includes everything from energy-efficient buildings, solid waste management and water conservation.

The zoo’s efforts have been appreciated by local officials.

“From the large solar array in their parking lot to the locally grown food they provide their animals, the zoo’s innovation, and willingness to push boundaries shows visitors that the vision of a more sustainable planet is achievable,” said Michael Forrester, director of the city’s Office of Environment and Sustainability.

Ryan Mooney, executive director of the environmental consortium Green Umbrella, described the Cincinnati Zoo as being “on the leading edge of environmental sustainability on a large campus for many years now.”

The Cincinnati Zoo & Botanical Garden is working to be net zero for energy, water and waste by 2025. That means the zoo will produce at least as much energy as it consumes. They'll do so by doing things like capturing stormwater from across the entire zoo campus and diverting more than 90% of its current waste stream from the landfill through reuse and recycling efforts.

After 2025, the long-term goal is to reach net zero carbon emissions by achieving a balance between the greenhouse gases it puts into the atmosphere and those taken out, Ritchey said.

Greenhouse gases are substances, like carbon dioxide and chlorofluorocarbons, that contribute to climate change by absorbing infrared radiation.

Mallory Geresy helps manage the zoo’s waste reduction efforts. It can be a difficult task at a facility that attracts more than 1 million guests annually and has thousands of plants and animals that require care. 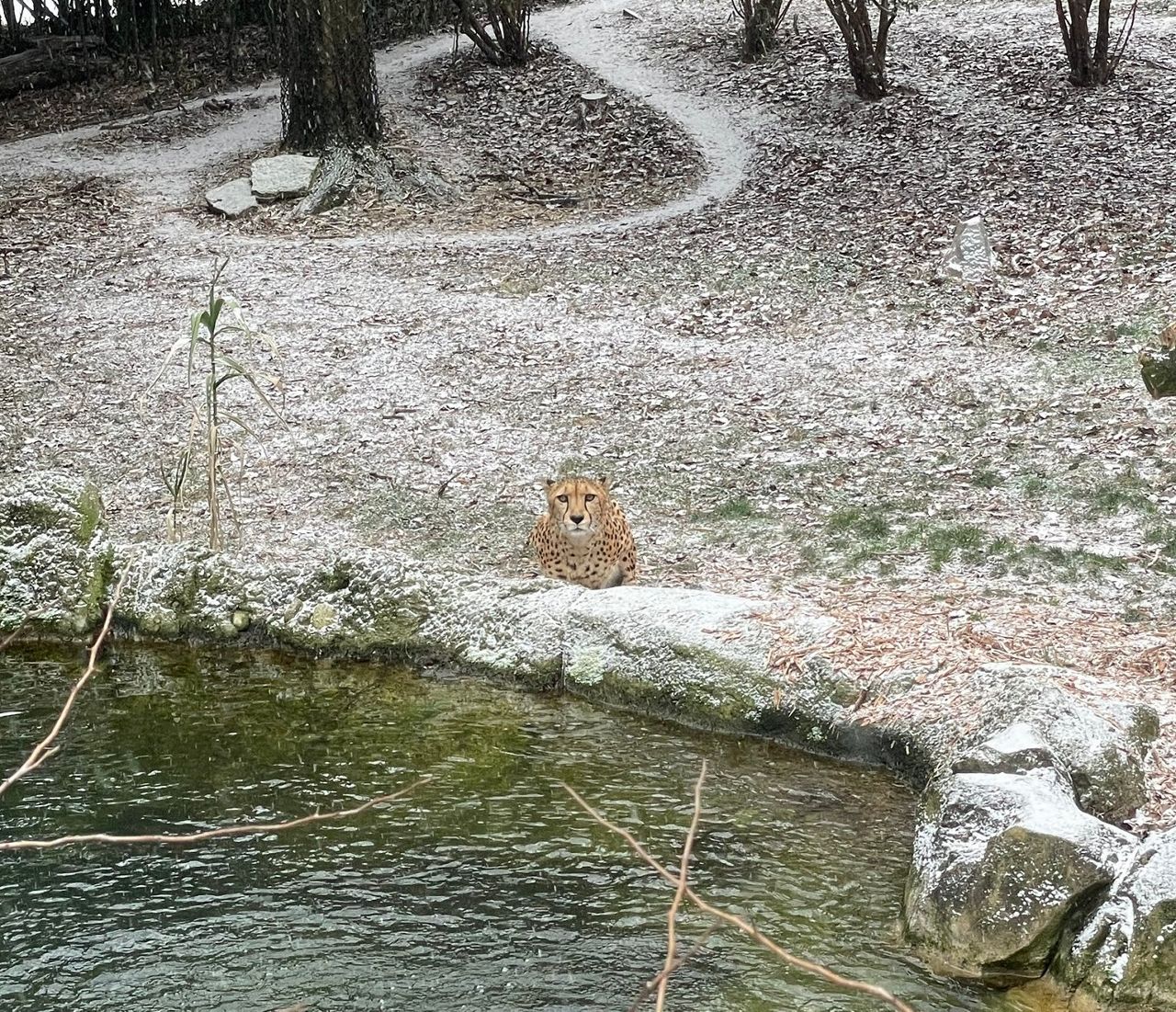 Recently, Geresy spent the day working to collect, sort and categorize the zoo’s trash, alongside Hamilton County R3Source, which is responsible for ensuring the county achieves state-mandated goals for recycling and waste reduction. They work with residents, schools, businesses and other organizations.

The group spent the day doing what’s called a waste audit to collect data that will help enhance recycling efforts.

They weren’t only looking for typical recyclable items, but also speciality and organic waste as well.

“We are working to create a list of hard to recycle items, or items that cannot be sent in mainstream recycling to Rumpke, in order to develop a specialty recycling program,” Geresy said.

The goal is to educate guests who come to the zoo about what should be recycled and what should go in the trash.

The zoo plans to use those findings to help educate the public on recycling dos and don’ts. Education is a big part of the zoo’s mission.

“We discovered a good amount of paper waste that could have been recycled, so that’s one thing we need to work on,” Geresy said. “Organic waste – primarily animal poop and food – is of particular interest, as that’s something we plan to process on site.”

The Cincinnati Zoo was an early adopter of solar energy in 2011. At the time, prices were still relatively high but the zoo decided it was worth the investment.

When it opened, the 1.56-megawatt solar canopy was the largest publicly accessible urban solar array in the nation. The 6,400 solar panels, located in the zoo’s Vine Street parking lot, convert sunlight into usable clean energy, producing about 20% of the zoo’s needed energy, and on sunny days sends power back to the utility company. 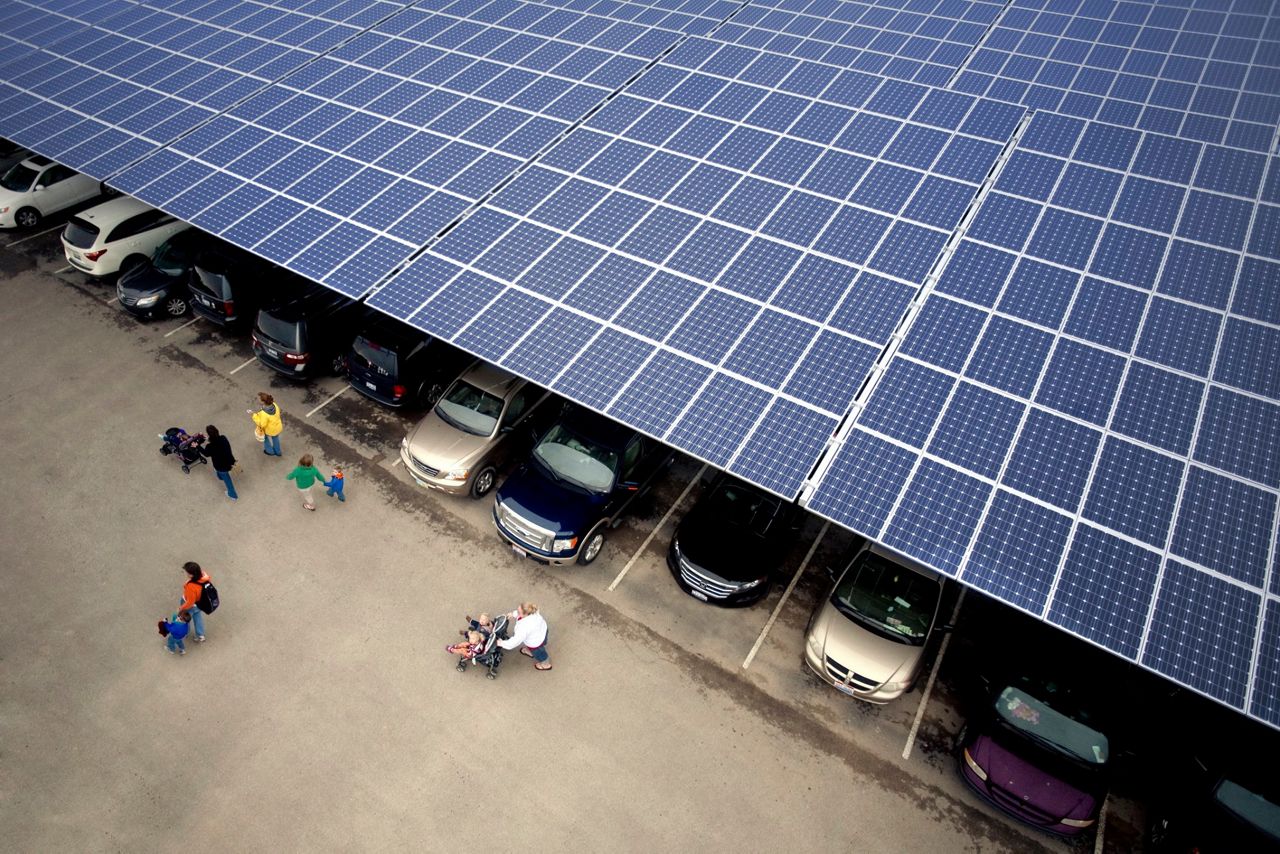 The solar array in the parking garage at the Cincinnati Zoo & Botanical Garden. (Provided)

Over the next two years, the zoo plans to build another, larger solar array and install a battery energy storage system, Ritchey said. Coupled with the battery system, the onsite solar assets will enable the zoo to meet over 50% of its energy needs. Ritchey said it will be a “resilient energy source during emergencies.”

The eventual goal is to create an entire energy mircogrid for the zoo.

“A lot of the things that we're doing are long-term investments that have two benefits for us. They reduce our environmental impact and our operating budget,” Ritchey said. “And, they’re the right thing to do.”

The financial investments in green infrastructure were vital to helping the park make it through the early stages of COVID-19 when it had to shut down for a few months and wasn’t able to collect revenue from ticket sales and concessions.

“(The solar array) paid a significant chunk of our electricity bills, which was very helpful,” Ritchey added. “Obviously, we still had to take care of our animals and our water reclamation projects helped reduce our water bills.”

One effort the zoo has prided itself on in recent years is water conservation. It’s not just good for the environment, it’s also good for the zoo’s bottom line.

In 2020, the zoo completed the Roo Valley, an Australian-themed enclosure where guests roam among the kangaroos beneath a lush canopy of trees. It also has a two-level, ADA-accessible ropes course.

While the fun occurs up top, there is a rain collection tank underneath the attraction so that the zoo can collect as much rainwater as possible and reuse it onsite.

The space is LEED-certified, which stands for Leadership in Energy and Environmental Design. It’s one of the most widely used green building rating systems in the world. 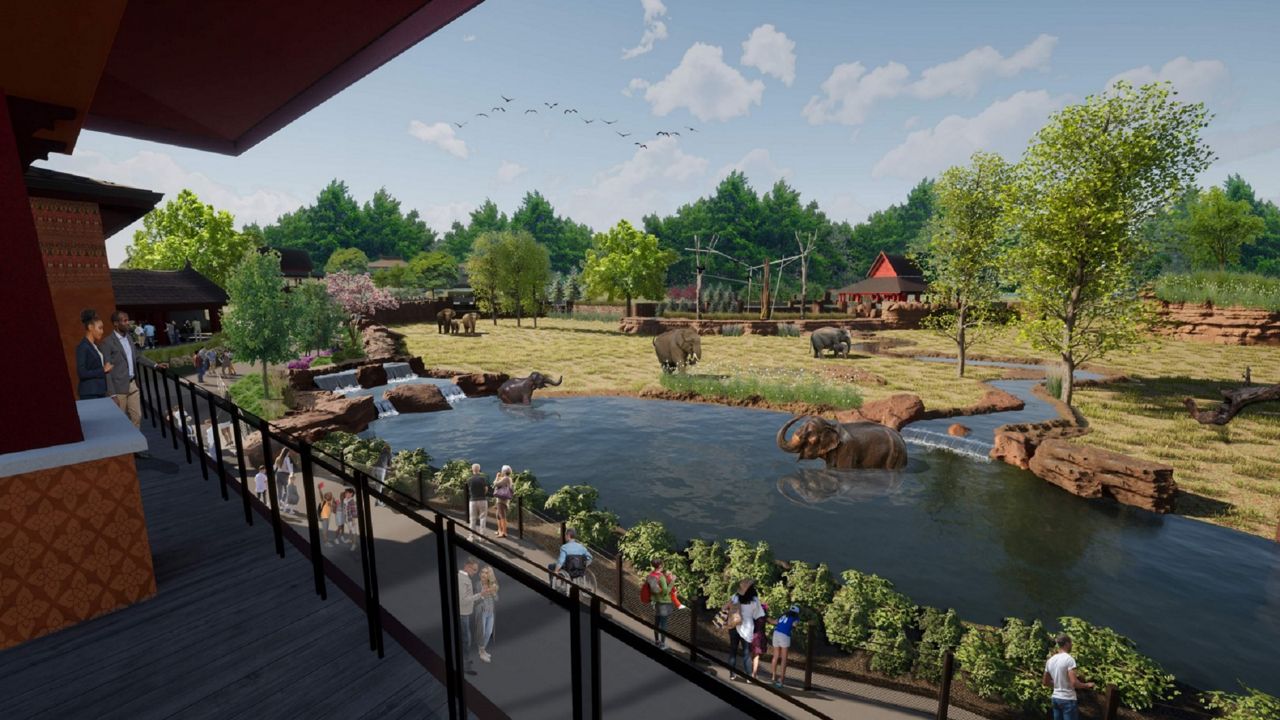 A rendering of the Elephant Trek habitat being constructed at the Cincinnati Zoo & Botanical Garden. (Provided)

The zoo is also developing a new Elephant Trek attraction, which will be the biggest habitat in its history. Once completed, the tank underneath it will hold about 1 million gallons of water.

The various tanks will provide the zoo with about 80% of its water needs, Ritchey said, and the conservation efforts already are causing its water and sewer bills to “plummet.”

“We're really proud,” she added. “With all the pools and the animals and the cleaning, we use a lot of water so we've been able to cut our water costs by 80% in the last 10 years through our water reclamation efforts.”

The cost savings are important to the zoo, which operates as a nonprofit organization. But another important factor is the tanks help contain runoff from rainstorms, so the water doesn't go into the sewer system and flood basements in the surrounding neighborhood.

By aggressively fixing leaks in exhibit pools, installing low-flow faucets and fixtures, upgrading filtration systems and changing everyday behaviors, the zoo brought the 2005 figure of 220 million gallons – enough water to fill about 335 Olympic-sized swimming pools — down to 74 million gallons by the end of 2012.

That number has continued to go down every year.

Being a good neighbor

More than 300 volunteers worked various service and beautification efforts, ranging from improving playgrounds at neighborhood schools to the creation of a walking trail at Larona Park. They also planted trees and removed invasive honeysuckle plants throughout the neighborhood.

But the signature element was the creation of a one-acre “Urban Learning Garden” and outdoor classroom at Rockdale Academy, designed by the zoo’s horticulture staff. It has vegetables, fruit trees, herbs, flowers, and plants known to attract pollinators. It’s seen as a “living classroom,” where students can learn about horticulture, botany and conservation.

The group also installed solar panels on the school, built a greenhouse and did some interior work, including adding a new community room. 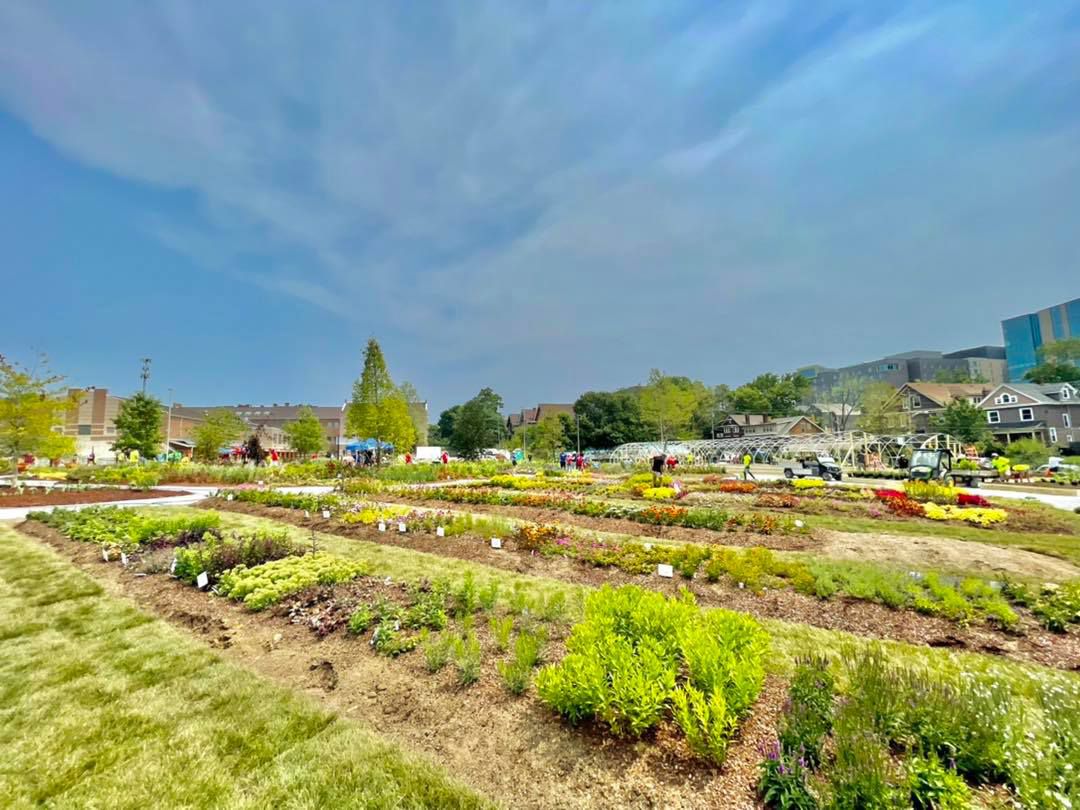 The Urban Learning Garden at Rockdale Academy in Avondale. (Provided)

“We, along with Rockdale Academy staff and the Avondale Community Council, are fully committed to using our networks and creative resources to ensure that this learning landscape lasts and is sustainable,” said Thane Maynard, the zoo’s director, at the grand opening.

In 2017, the zoo received a $700,000 grant from Duke Energy to transition to using all LED lights, which use less electricity. The switchover was especially impactful for its annual PNC Festival of Lights, a holiday display that uses more than 1 million lights.

Zoo personnel also looked at energy efficiency improvements in apartment buildings, churches and other spaces throughout Avondale, with the goal of extending the zoo’s energy efficiency efforts into the neighborhood. They helped install LED lighting in homes, churches, and about 50 known “trouble spots” around Avondale where new lighting was seen as a way to increase public safety.

“We literally went into the businesses, organizations within the Avondale community, and helped those that needed to replace their old lighting systems with more efficient lighting,” Ritchey said.

Ritchey said the zoo hopes to lead by example. She said their mission is prominently on display for the more than 1.5 million people who walk through their gates every year and simply look around.

“We view ourselves as leaders in the community and we want to lead by example,” she said. “We are stewards of the urban habitat at the zoo and this is central to how we can demonstrate a more sustainable and conservation-based urban environment.”