More than 30 years later, health still a concern for those living near former uranium plant

HAMILTON COUNTY, Ohio — It’s been more than 30 years, and studies are still being done to find out whether chemicals from an old uranium plant is making people sick.

Hamilton County resident Lisa Crawford refuses to drink water from the sink after something happened more than 30 years ago.

“Once you’ve drank from a really nasty contaminated well and you’ve worried about your baby’s health and you’re health, this little bit of (sink) water means nothing to me," said Crawford.

Uranium, a radioactive chemical, was released into the ground right across the street from where she lived. Without even knowing it, Crawford said her family was breathing and drinking radioactive waste.

“It was being tested and nobody was telling us,” said Crawford. “It threw us all into a scary turmoil."

It was all coming from what is now a cleaned-up nature preserve in Hamilton County, which used to be the Fernald site. The chemicals were used there to make nuclear weapons during the Cold War to the 1980s, but the people who lived nearby ended up in a battle.

The plant closed down in the late 1980s. The site then became a part of the Department of Energy's Legacy Management Program, which helps clean up former nuclear sites. But the site didn't turn into more than seven miles of hiking trails for the public to enjoy without a push from the community.

“We formed an organization called FRESH, Fernald Residents for Environmental Safety and Health, and we fought back,” said Crawford.

The Crawfords and dozens of other residents sued the Department of Energy and won.

“Makes you feel like you fought for something that really mattered,” said Crawford. 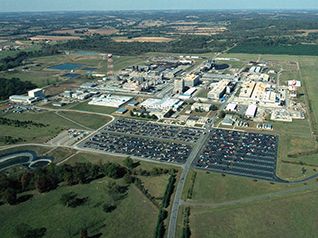 The former Fernald site. (Courtesy: The Department of Energy's website)

It’s the 31st anniversary of a health monitoring program that was put into motion as a part of their lawsuit settlement with the DOE.

The program coordinator, Jeanette Buckholz, said researchers have been studying cases of cancer that could be linked to the uranium leak.

“We are doing studies, and we’re looking at breast cancer, bladder (and) kidney cancers of people in the environment,” said Buckholz.

She said their work is not done yet. They’re still collecting samples from more than 9,000 people impacted.

Crawford said her family is healthy so far. They've since moved a little farther away from where the plant used to be.

But even though it’s all been cleaned up, 30-plus years later, Crawford still doesn’t trust drinking the sink water.

Fernald is one of two former nuclear sites that have been transformed into a public space. The other area is Weldon Spring which is about 30 miles west of St. Louis.

Despite the cleanup at Fernald, there are still precautions in place. No pets are allowed, visitors are asked not to travel off of unmarked paths, and swimming and camping among many other activities are prohibited.

While much of the uranium was transferred to nuclear disposal sites in Nevada and Utah, some of it remains deep under Fernald in the eastern corner, far away from public access.

Uranium can have both chemical and radiological effects on the body. The chemical itself, Uranium, is found in small natural amounts underground but too much exposure can result in health issues like high blood pressure, autoimmune dysfunction and kidney disease.

Radiation, which is the release of energy and particles from uranium and some other elements, is also found in small amounts. But too much exposure to radiation can result in certain cancers, according to the U.S. Environmental Protection Agency.