CINCINNATI — Jennifer Chilton knew at an early age she would become a police officer. It's in her blood.


Chilton's grandfather, Othello Chilton, retired from the Cincinnati Police Department in the 1970s. Dan Chilton, her father, is a former police chief and retired from Milford, Ohio's police department in 1997. 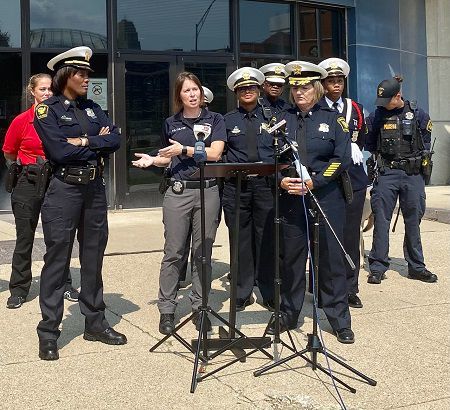 In her early adult years, Chilton tried to "run from the inevitable," as she put it. She ventured out to the West Coast and tried to carve her own path in the restaurant world and later, the medical field.

But she said the pull of home and "her calling" proved too strong.

"I've always been compared to my father because we're so much alike. I wanted to go out on my own and do something besides follow in his footsteps. Deep down, I always knew I would end up becoming a police officer. It's what I'm meant to be doing with my life," she said.

Chilton moved back to Cincinnati in 2007 and decided to follow the family path. She took the entrance exam to become a CPD officer, passed and was accepted into the police academy.

At the age of 32, she became the third generation of Chilton to wear a badge.

She credits her family with helping her along the way. Her significant other, Jen Lintz, is a key source of that support.

"My family has always been very supportive. Obviously, they care about me and are concerned about my well-being, but they know I have a good head on my shoulders and I'm not very impulsive," she said. "I think that's why women make great officers — they tend to approach the work differently."

Now, 14 years later, Chilton is one of 228 officers who identify as female on the CPD force. She works in recruiting for CPD and is helping the department attract more women to a career in law enforcement.

Taking the 'pledge' to attract more women to law enforcement

On Monday, Chilton was joined by 10 other female CPD officers at District 1 headquarters to announce the department's commitment to the 30x30 Pledge.

The pledge is a national initiative that aims to get police departments across the country to commit to adding more women to their sworn ranks. It calls for participating departments to work to get to 30% female officers by the year 2030.

Created by the Policing Project at New York University (NYU) School of Law, the pledge has had 104 police departments in the United States agree to take part since it launched in March. 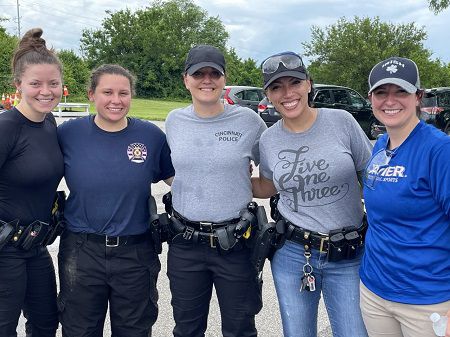 So far, CPD is the only department in Ohio that's agreed to take part.

“In light of the last couple years, a lot of people are realizing that they want to be part of change in their community. Becoming a police officer is one way to do that,” said Chilton, who’s working to attract applicants for CPD's fall exam. This is the second class she's helped recruit.

Women make up only 12% of sworn officers and 3% of police leaders across this country, per NYU. In Cincinnati, those numbers are higher than the national average, but still only 22.7%.

Maureen Q. McGough called the 30x30 Pledge a grassroots effort of policing leaders, researchers and professional organizations who have joined together to "improve the representation of women and ensure policing agencies are environments where women officers not only survive but thrive."

The pledge will include concentrated efforts in recruiting and hiring women, as well as strategies to retain and promote women. "This is, of course, critical from a gender parity perspective, but it's also critical for improving public safety outcomes," said McGough, the 30x30 Pledge's co-founder.

Women, for instance, use less force and excessive force than their male counterparts, she said. Female officers also tend to be perceived as "more honest and trustworthy, achieve better outcomes for crime victims, and are named less often in complaints and lawsuits."

"Addressing many of the critical issues in policing today requires us to deeply examine who is being hired, and what skills and abilities are valued in hiring and promotional processes," McGough said. "We are confident that improving the representation of qualified women in policing will result in improvements in public safety outcomes for communities." 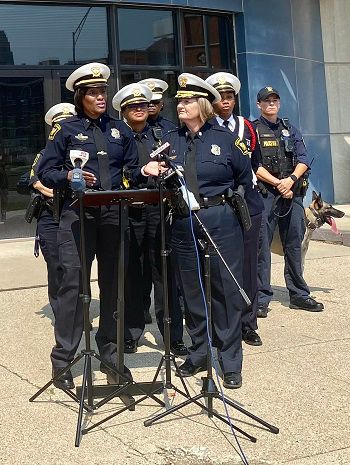 Capt. Danita Pettis, a 23-year veteran of CPD, said that bringing more women and diversity to a department results in "different perspectives" and approaches for handling difficult situations.

"I don't know if it's a psychological effect, but maybe sometimes it's a little easier for individuals to acquiesce to a female because they don't feel like they're being threatened or challenged on... a masculine basis,” said Pettis, who commands District 2. "There have been times where I felt like I could come in and use my characteristics as a female to kind of deescalate a situation, to the extent that it was a successful outcome."

In a Q&A outlining the program, McGough said the reality is that many of the assessments used by departments have been around for decades and were created by "white men at a time where white men were the default."

"Research shows that if an individual is in an underrepresented group, small barriers to applying are enough to deter them from the process altogether," she said. "We're therefore encouraging agencies to review their application process for micro-barriers that may be contributing to lack of diversity."

The 30x30 Pledge includes a series of no- or low-cost actions law enforcement agencies can take to improve the representation of women across all sworn positions.

They'll continue to provide a series of data and commit to certain practices in an effort to make progress. They'll also share industry best practices for hiring and retention.

McGough said the pledge is not so much about accountability as developing a framework to improve representation. Part of that will include identifying and better understanding possible barriers.

"It's not about lowering the standards; it's about changing the standards to better match the actual requirements of the job," she said. "In doing so, I suspect you'll see higher-pass rates for diverse demographic groups."

CPD: Ahead of the curve, with room to grow

During Monday's event, Executive Assistant Chief Teresa Theetge commented on the importance of staffing a diverse department that is representative of the population it serves.

Cincinnati’s population is 51% women, according to U.S. Census Bureau estimates. Cincinnati’s complement of female officers is less than 1/4 of the workforce. But CPD is looking to change that through recruiting.

The department is in the process of signing up applicants for its recruit class in late November. They’ve already started an aggressive social media campaign and plan to host a variety of recruiting events.

It's not just looking to increase the number of females, either. They've also done things, like working with Black fraternities and taken part in LGBTQ+ seminars, to assist with recruiting efforts within those communities.

In the past, they've used their cadet program to help enlist young people interested in a possible career in law enforcement early on.

"We make a very concerted effort to make sure (recruiting classes) are as diverse as they can be. I think what it says about CPD is that we value the women in this department just as much as we value men to go out and police the streets of Cincinnati," Theetge said.

CPD has placed an emphasis on diversity in hiring and internal promotion over the past few years. CPD's last three police chiefs have been Black men, including current Chief Eliot Isaac. 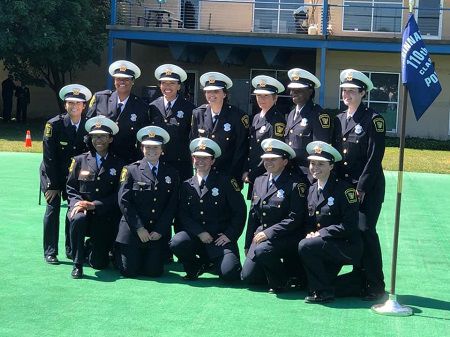 They’ve also in recent years promoted the first two women to the rank of assistant chief — Lisa Davis and Theetge, the highest-ranking female officer in the history of the department.

Theetge said there are a variety of reasons why women may not want to go into law enforcement. But she thinks those are likely personal reasons, rather than necessarily institutional barriers, at least with CPD.

"I think people expect me to, to walk in and talk about how I had to claw my way to the top. For me personally, it couldn't be further from the truth," she said. "I've had amazing men who saw something in me, as I was coming up through the ranks, and kind of mentored me and helped me get to where I am today."

"So I think it's mostly the personal challenges; it's whatever you see in front of you that you categorize as a challenge instead of an opportunity," she added. "I think if you spoke with each one of us, you'd probably get a different answer from each and every one of us standing here today."

CPD said the fitness test is where it tends to lose candidates. It has offered, and will for this testing period, voluntary workouts to help candidates prepare for it.

They said they're planning to offer an open house for women and only led by women from CPD to help make them feel more comfortable with not only the physical side of the work, but the process in general.

"Whether you're a man or woman, the department is looking for the best of the best," Chilton said. "We need different opinions, unique talents and strengths. Those unique skill sets make for a well-rounded department."