Joshua Young-Duyan, 7, carries a pumpkin to his mom at Bob's Pumpkin Patch in Half Moon Bay, Calif. (AP Photo/Jeff Chiu)

What’s Behind The Rise in COVID-19 Cases?

The number of positive coronavirus cases in the United States is surging upwards, with nearly 40 states reporting a rise in infections. Experts say the worrisome trend points to potentially rough winter months ahead. 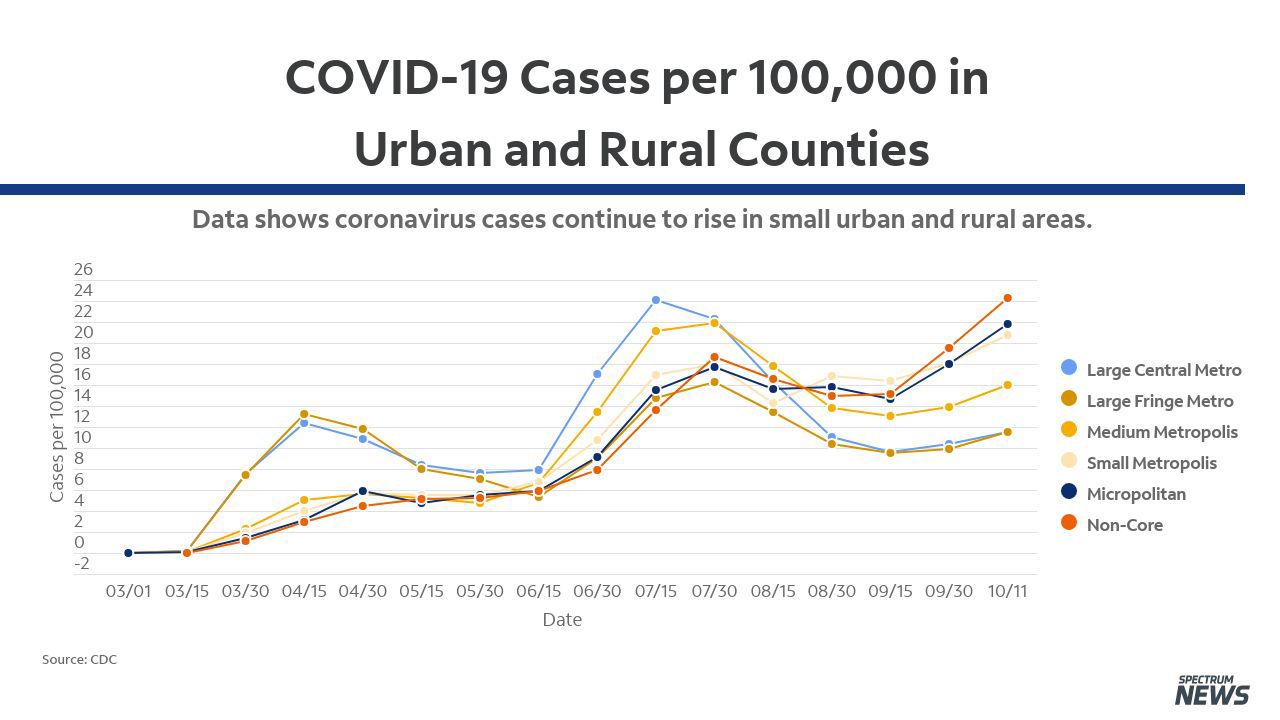 The CDC has broken down the trend based on population factors – early on in the pandemic and even in during the summer months, it was the large metropolitan areas in the country that saw the highest surges in cases.

Meanwhile, rural and so-called micropolitan areas with around 10,000 to 50,000 residents, have seen a steady increase in cases, which are now rapidly moving upwards.

“It doesn't really have that first wave, second wave appearance. It's really been a steady increase in these rural locations,” said Justman. “I think rural locations, perhaps people may have felt more protected because things are not as densely populated. Perhaps they were not taking as many precautions with social distancing and masks. And I think generally rural parts of the country have older Americans who have more health problems.”

During a call with governors earlier this week, CDC Director Dr. Robert Redfield expressed concern for the rising rates, saying he believes that small household gatherings may be to blame for the increased community transmission.  Justman says there are likely multiple factors behind the surge in cases, also pointing to college students sent home in the wake of campus outbreaks this fall.

"The death rates seem to be also mapping right along with the case counts in the rural parts of the country. And that's in contrast to other locations where, even as case counts rise, death counts are not rising in parallel because a lot of the cases have been among younger, healthier individuals."​

Already more than 215,000 Americans have died due to COVID-19 illnesses. Last week, Dr. Anthony Fauci, the nation's top infectious disease expert, predicted the country could potentially lose another 100,000 to 200,000 people to the virus – but he says there is still time to prevent this latest surge from spiraling out of control.

“What we can do is the public health measures that I talk about all the time, the simple things: keeping distance, wearing a mask, avoiding crowds,” Dr. Fauci said. “They seem very simple. Do you think you can avoid just by doing that? And the answer is absolutely yes!”

In early summer there was a lot of concern there would be overlapping coronavirus and influenza pandemics in the southern hemisphere, but countries like Australia instead experienced a very mild flu season. Their public health authority points to high compliance with mask wearing, hand washing and social distancing as the key to reducing the spread of the virus.

As the country heads toward the holiday season, Justman suggests families re-evaluate who they spend time with based on how widespread the virus is locally before gathering together to celebrate.

“I think the whole question of pods, how do people define their pods, and how do the members of their pods behave," said Justman. “I don't think anybody wants to say forget Thanksgiving. That seems pretty, pretty, pretty sad.

"I don't see any easy answers other than, and even this is not easy, but to calculate your risk" she added. "Make your decisions in a very customized way. Who's at your table? How likely are they to get very severe COVID if they were exposed, and try and adjust your decisions based on who's in your family and where they have been.”