BATAVIA, Ohio — Rachel and her parents were admittedly nervous about seeing the man accused of sexually abusing their sister and daughter in court Monday morning, but that was not going to stop them from showing up and looking him in the eye with a silent message.

"I wanted an opportunity to look him in the eye and for him to look me in the eye, and for him to know exactly where I stand, if it wasn't clear already — I wanted it to be perfectly clear today. I just wanted him to know that I 100 percent stand behind her and I will fight along with her until he is brought to justice,” said Rachel, referring to former Bethel-Tate High School coach, Chad Willhoff, who was charged in July with multiple counts of sexual offenses with a minor.

He pleaded not guilty on all charges.

Her sister, who came forward earlier this year to the Clermont County Sheriff’s Office, was not present.

"She's not ready yet and doesn't have to be at this stage. So, for now, I think she's just protecting herself and doing the things that she has to do to process and begin to try to heal,” said Rachel, who is being referred to only by her first name to protect the identity of her younger sister.

Her family said they vow to follow this through to the end no matter how long it takes, and that is why they came to court.

“It was really important that we were here on behalf of my sister and that she knows that we're with her every step of the way, and we will stand in place for her for as many times as we need to until he's brought to justice,” Rachel said with conviction standing outside the Clermont County Court of Common Pleas in Batavia.

For them, it was a mix of relief and disappointment that he was absent from court.

Neither Willhoff, nor his attorney, John O’Shea, were present, however, his attorney was on speaker phone to converse with Judge Jerry McBride, who told him, “I expect trial attorneys to be present.”

O’Shea relayed to the judge that he had not received any evidence from the prosecutor’s office to date.

While Willhoff and O’Shea were not there, 42-year-old Rachel, the victim’s older sister, did sit inside the courtroom listening to the judge and O'Shea, alongside her parents.

As a victim, her family said, she has carried this secret for years and now it is their turn to carry the burden for her however they can, including amplifying her voice and showing their unwavering support by showing up at every court appearance. 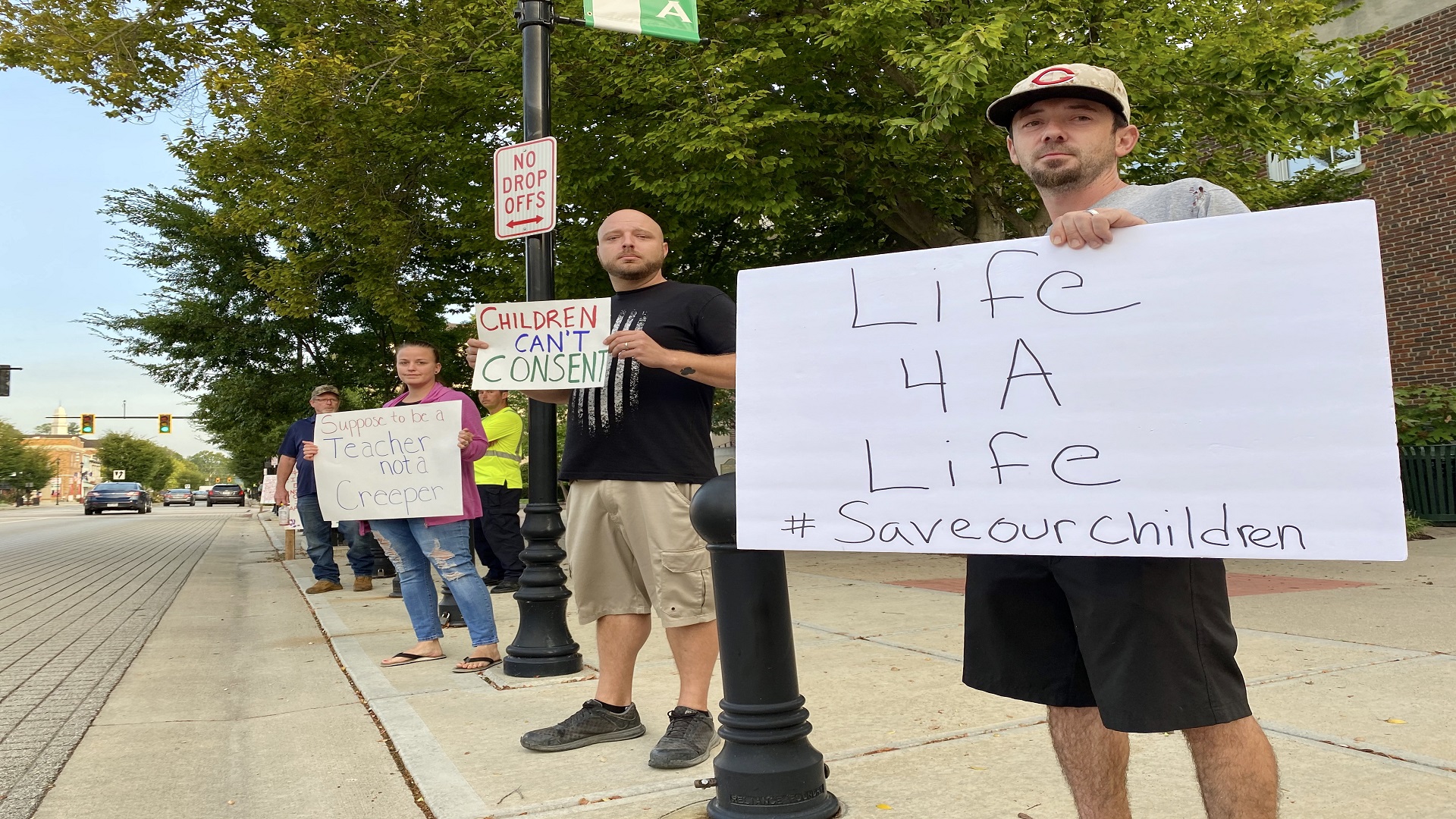 That support is also why 31-year-old Frankie Moore stood outside the courthouse as the proceedings were going on inside — to rally for all victims of sex crimes, in hopes of giving them a stronger voice.

Moore, of Mt. Washington, is also a graduate of Bethel-Tate High School. He organized an early-morning rally outside the courthouse, and was joined by about a half dozen other anti-abuse advocates with signs in hand, a mission, and a message.

"I think support by anybody is important — she may be judged by some for coming forward — so, they also need to know that there's people that support them," said Moore, who personally knows victims of childhood sexual abuse. "It's very hard to come out and to come forth to prosecute someone of these actions when there is no support.”

Moore, who also attended a candlelight vigil in front of the courthouse in August with the same mission, held signs alongside other like-minded supporters Monday morning with the words: “A life for a life,” “#SaveOurChildren,” and “Children Can’t Consent.”

He also posted large signs in front of the courthouse depicting abuse cases, including the case against Willhoff, and that demanded stronger punishment for sex abuse convictions.

Moore, the founder of the organization WE: We are against Pedophilia, Human Trafficking, and Corrupt Media, a Facebook group dedicated to giving a voice to victims of sexual abuse and human trafficking, hopes these rallies will "bring awareness and help support the victims and show other people that they need to be aware of helping these victims — just the support alone, to know that they have people behind them, so that they can go to court and show up in court, so that these guys don't get plea deals.”

With Willhoff's case in mind this morning, he said he wanted the justice system to take notice.

"There are people watching their actions and their prosecutions and we're not happy about it,” he said. “We want them to know we're holding them accountable. These criminals are getting let off with minimal years for the justification of their actions. Somebody who molests a child, I wouldn't be so easy on them.” 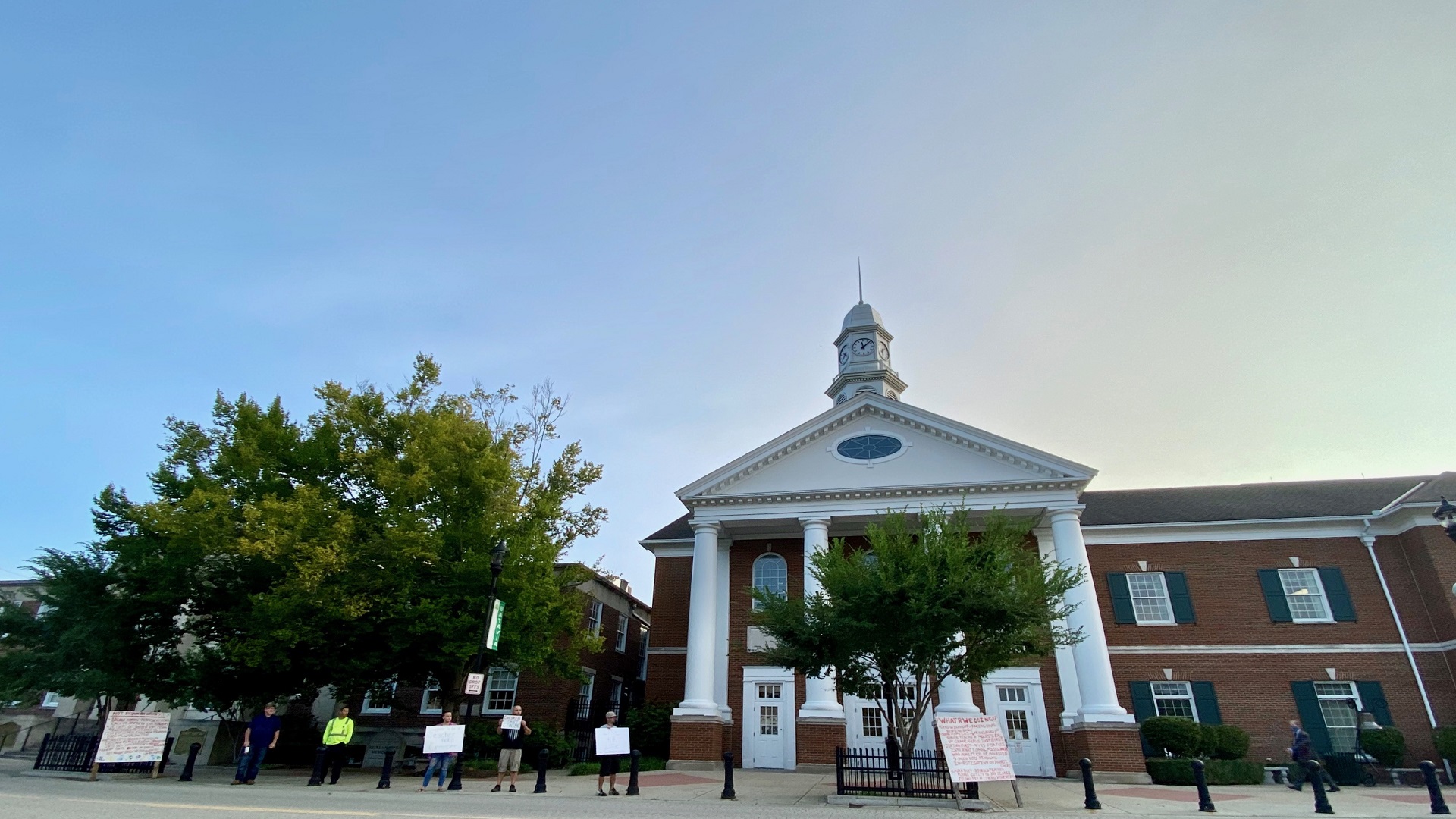 Strangers supporting her sister, means a lot to Rachel and their family, she said.

"It warms my heart. Any support is so welcomed, but to have people make signs and come and stand out in the early morning to show support, and to really ask for stiffer penalties and to require that our justice system takes these issues more seriously so that it sends a message to others out there right now, who may be doing the same thing, that you will be caught — and when you're caught, people are going to believe the victim,” she said.

The more light that is shed on the issue to bring awareness of sex abuse, she continued, will help other victims, like her sister, feel safer to come forward.

"That's the number one thing we hear, is the perpetrator tells the victim, no one will believe you. So, we have to have to speak up; we have to be vocal; we have to be very visible in our support of victims, so that these men, women know that times have changed, and people do believe victims more than they ever have,” Rachel said.

Willhoff, of Milford, turned himself into the Clermont County Sheriff’s Office in July after a grand jury indicted him on 10 third-degree felony charges, including one count of gross sexual imposition, three counts of sexual battery and six counts of unlawful sexual conduct with a minor.

The alleged abuse spanned over several years, beginning when the victim was 12 years old and continued while Willhoff was her coach from 2004-2008 at Bethel-Tate High School, said Clermont County Assistant Prosecutor Scott O’Reilly.

“Obviously, he had access to her in a lot of different ways—one of which was being a coach of her while she was in high school, so that’s concerning enough,” O’Reilly said shortly after Willhoff’s indictment this summer.

That access, however, reached further than coaching her because Willhoff is also a family member of the victim, the prosecutor revealed.

“You’re talking about an entire family being damaged, and in a lot of cases, when it’s inter-family, and we have a lot of those, it’s not just difficult on the victim but just how this changes the entire family dynamic. It just tells you how personal sex offenses are and how many different people are really affected by it,” O’Reilly said.

It is unknown at this time if there are any other victims in Willhoff’s case, but O’Reilly said it only takes one person coming forward for others to feel strong enough to report their abuse as well.

"It's not uncommon at all for additional people to come forward, and you can see how this has been a pattern of conduct usually for a very lengthy period of time,” O’Reilly said. "I think there's strength in numbers. I think that a lot of times it takes one very brave person to stand on their own and then it takes somebody to believe them — but I think that once there's that strength position. Then the flood gates open.”

O’Reilly did not elaborate on what circumstances compelled the victim to report Willhoff to authorities May 16.

“I’m going to let the trial process play its way out, but I think you’ll understand why,” O’Reilly said.

The case may not go to trial until 2021, but the prosecutor is confident in the evidence against Willhoff when the time comes.

"I think we've got some pretty good evidence,” O'Reilly said. "If we're not convinced that a case should go forward then we shouldn't be presenting it if we didn't think it was enough evidence. So, obviously I believe there's enough evidence here.”

Willhoff, a married father of two, has pleaded not guilty, however, if convicted; he could face 50 years in prison and would have to register as a tier-3 sex offender.

Both Willhoff and his attorney have not responded to requests for an interview. His next court date is scheduled for Oct. 13.