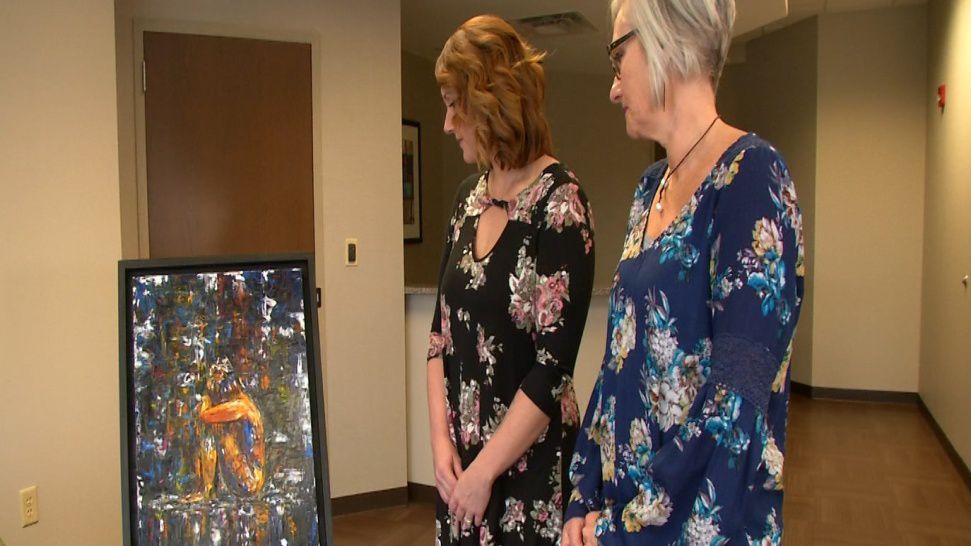 CINCINNATI, Ohio – A mother has created a painting of a vivid memory she has of her daughter the night before entering treatment for drug addiction.

Gale Suver's painting called “Surrender” was recently on display with other artwork at the Center for Addiction and Treatment in Cincinnati – the place where her daughter gets treatment for her disease.

“Everything is representational to me,” Suver said. “Starting with her she was sitting in a bathtub. And I have the figure in the painting sitting in water, which she was, but it's also, to me, ready for a cleansing.”

The bathtub image of her daughter Abby McDonald has stuck in her mind for six years. Abby has been clear and in recovery since then but the painting symbolizes darkness and the light for which Abby eventually found.

Suver painted the picture in December 2018 and gave it to McDonald.

“I think that it's amazing,” McDonald said. “When I first saw it it was very emotional for me.”

McDonald battled a drug problem and kept it hidden from her parents for years, until she got in trouble and had to confess her problem. That's when her parents took her to CAT for treatment.

The painting's bright oranges and yellows represent the sun of a new day, according to Suver. The blue, however, symbolic of shame, despair, and depression associated with addiction.

The American Society of Addiction Medicine classifies addiction as a disease. But a recent survey by CAT found 51 percent of Cincinnati residents who responded to the survey believe addicts are responsible for their problem.

Even though addiction can be caused by pre-existing brain and body functions, or exposure to illegal drugs. 82 percent of respondents said people with addiction should be accountable for their condition.

Experts say people battling addiction need treatment, sometimes medical assistance, to battle the issue. And recovery is a lifelong journey as it would be for a cancer patient.

McDonald has been in recovery for six years. In the last three years she's gotten married and had two daughters, 2 and 8-months. She knows someday she'll have to talk to her daughters about illegal drug use and what she went through.

“It needs to happen,” McDonald said of the conversation happening sooner rather than later. “Because they're going to be exposed whether they like it or not. And they have two parents that are in recovery. So it's going to be a part of their life.”

For Suver, she hopes people who see the painting find encouragement.

“That's really my biggest hope is that somebody will see that and and feel some good emotion.”