COLUMBUS, Ohio — Gov. Mike DeWine said he is unsure if the Biden administration’s goal of a 70% adult vaccination rate by the Fourth of July is realistic for Ohio.

“I know the president is talking about 70% by July. Is that doable? I just don't know whether it's doable or not,” DeWine said Friday. “But I can tell you if we would get 70% in Ohio, this virus is going to have a really hard time infecting too many people.” 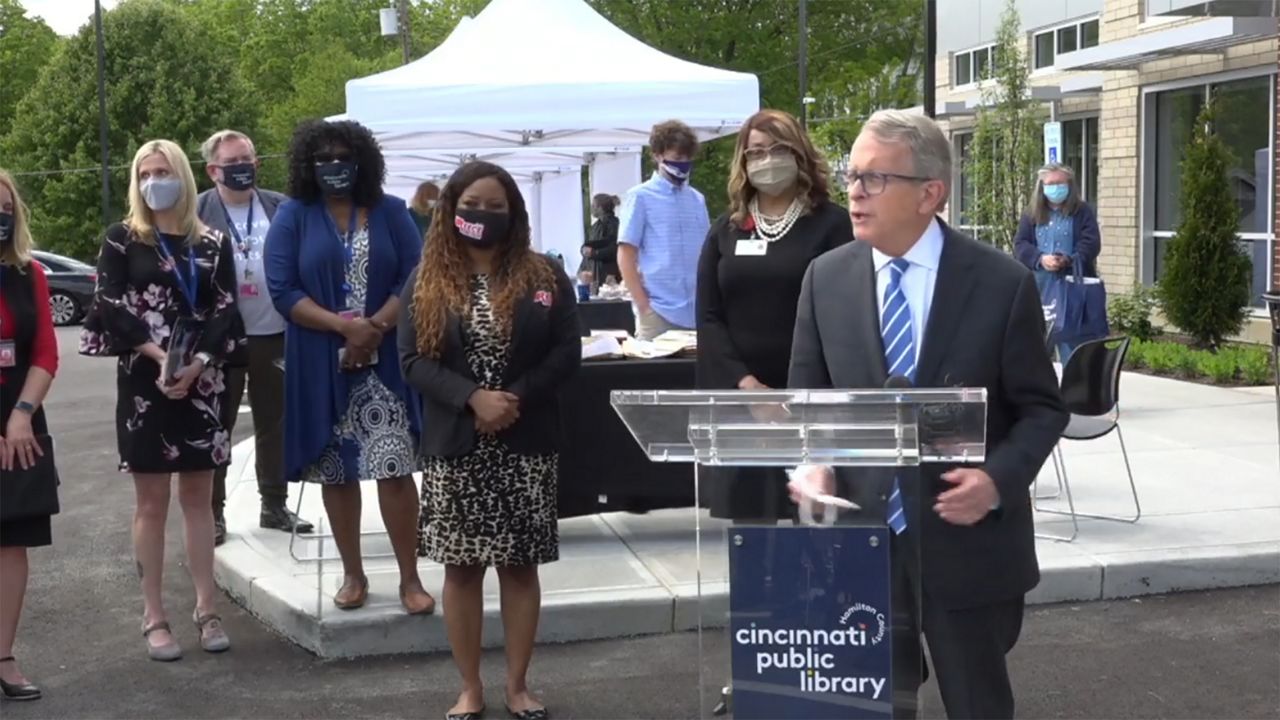 DeWine said he is optimistic Ohio can continue a pace of 20k or more first-doses administered per day. (Courtesy of the Office of the Governor)

DeWine made the statement while speaking at a mobile vaccination clinic at a library in Cincinnati. It was made in response to President Joe Biden on Tuesday announcing a goal to have 70% of the U.S. adult population receive at least one vaccine shot by July 4.

Ohio’s vaccination rate among adults crossed 50% last week, DeWine said. A total of 4.8 million residents have been vaccinated, which is 41% of the total population.

DeWine said he was optimistic Ohio could maintain a vaccination pace of more than 20,000 daily first-doses in the coming weeks.

Discussing the possibility of a vaccination target to end health orders, the governor said he has thought about a 55% or 60% goal, but he said he will likely lift health orders when the state’s case rate drops below 50 per 100,000 residents for a two-week period, the original plan he announced in March. On Friday, Ohio’s case rate was about 138, he said.

“Let's talk about the 50. Every day we are getting closer. Now, we're not moving as fast as we would like . . . we're lower than it's been for a number of months,” he said. “As far as whether we set another goal, I'm not really sure. I think, frankly, that whatever goal we set, that when we break 50 would be probably when we would cross that line as well.”

The governor repeated Friday that he has no interest in making the vaccine required, but he cautioned that the private sector is starting to make those decisions.

DeWine predicted more fans will be able to attend professional baseball games soon, and he said he was hopeful Ohioans will see health orders come off this summer.

DeWine and First Lady Fran DeWine had stops on the schedule Monday in Sycamore State Park Sindley State Park to unveil new trails in the parks.