Trump and COVID-19: Where Does Public Health Go From Here?

President Trump’s message was clear Monday night; he believes he has bested the vicious coronavirus and the country should not cower in fear of it. In a campaign-style video released on Twitter he characterized his choices that led to his infection as courageous. “I know there’s a risk, there’s a danger. That’s okay. And now I’m better and maybe I’m immune? I don’t know. But don’t let it dominate your lives. Get out there, be careful."

Dr. Perry Hiltakis, dean of Rutgers University School of Public Health says his hopes that Trump would be humbled by his COVID-19 infection were dashed as the president unmasked himself in front of his staff and cameras to record his twitter video. 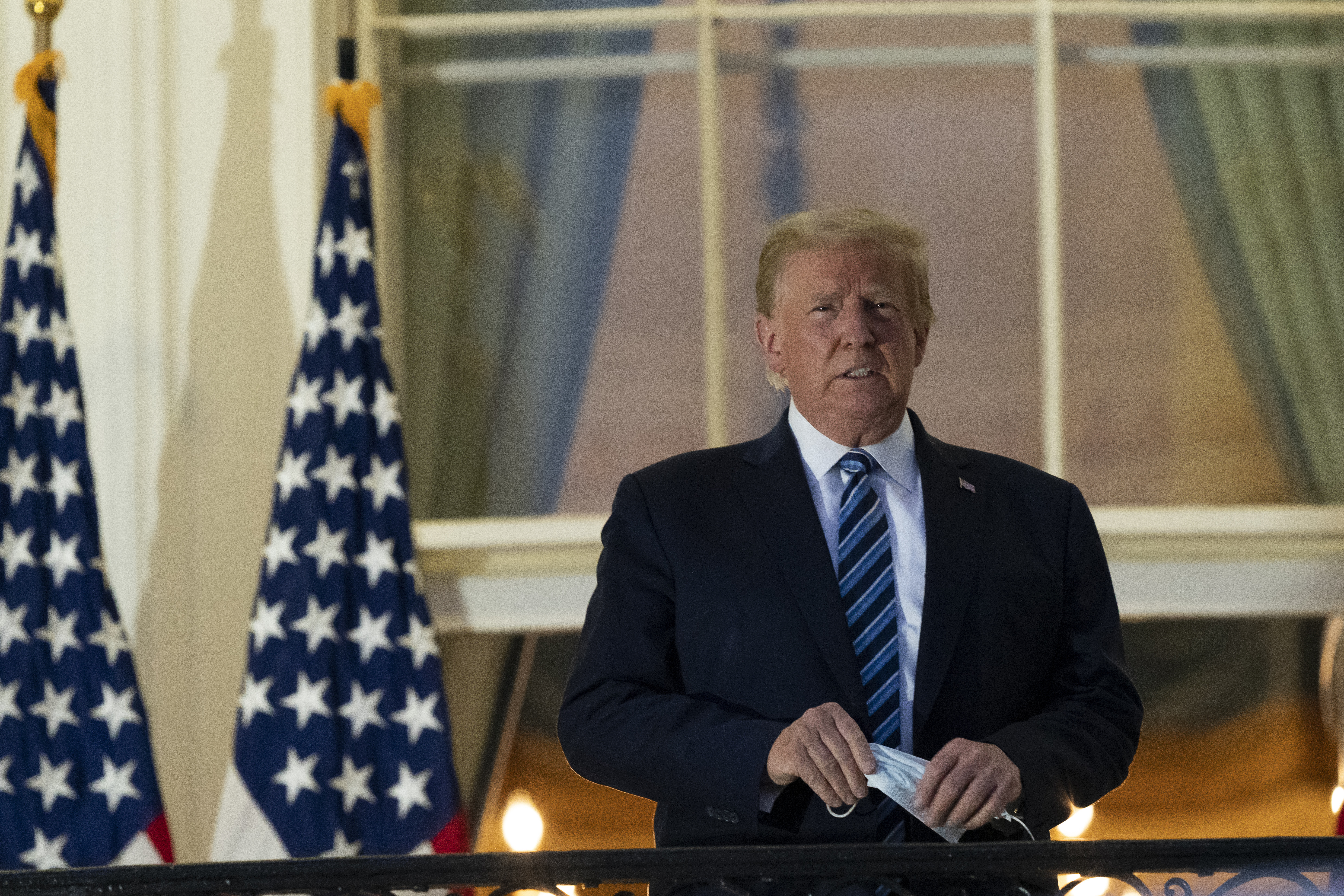 “This has continued his strategy of trying to act as though the virus isn't really there. In fact, he's told everybody, don't be afraid of it. When it's taken over 210,000 lives in this country and a million lives around the world. The recklessness of this is just hard to imagine,” said Bassett. “It will continue to harden the idea that following well-considered, very simple public health advice, is a political statement and not something designed to keep people safer.”

I will be leaving the great Walter Reed Medical Center today at 6:30 P.M. Feeling really good! Don’t be afraid of Covid. Don’t let it dominate your life. We have developed, under the Trump Administration, some really great drugs & knowledge. I feel better than I did 20 years ago!

Doctors who have served on the front lines of the coronavirus pandemic like, Daniel Sterman, director of Pulmonology, Critical Care and Sleep Medicine at NYU Langone Health, agree with Trump’s own medical team, that he is not out of the woods yet. While it is unclear when exactly the president was exposed to the virus, Sterman says the President still needs to take it easy.

“There's this five to seven-day window, we're right at that point. People who seemingly are doing really well can suddenly crash. And this was a phenomenon that we saw not just in New York but across the world. And so you could be falsely reassured by how someone is doing at this time. And then you've exhausted the medication that you know are beneficial. At that point, you're hoping for the best,” said Sterman.

In recent days the President has said and tweeted that he feels better now than he has in years. Doctors say this could be a side effect of a corticosteroid he was given, dexamethasone. “Steroids give you sort of a euphoria, almost like a high. And that may have been what we were witnessing,” said Bassett of Trump’s energy. “He's definitely not out of the woods. And it's irresponsible for him to be projecting that he is. Of course, he may be, and that would be good. But, you know, he doesn't know that for sure.”

Sterman though, says dexamethasone is usually reserved for critically ill patients in need of ventilator support. That, along with his other treatments, he says paints a worrisome picture.

“If I saw that a patient had received an experimental drug, on compassionate use basis, the Regeneron cocktail monoclonal antibodies, then remdesivir and still on remdesivir. And then started on dexamethasone and had intermittently at least required some of the oxygen, that's a patient I'm concerned about. Regardless of who that patient is. And if that patient is a male, 74-year old, overweight patient, I'm even more concerned about that patient. I would have a very heightened level of need to follow that patient as closely as possible in a clinical setting where I could act quickly if a deterioration happened,” said Sterman.

The President’s doctors say they are comfortable with him returning to the White House, which they say has appropriate medical facilities to monitor him.

Meanwhile, Halkitis and other public health experts say it’s time to step up the messaging to counter the misinformation coming from the commander in chief, first by acknowledging that Trump is receiving care most cannot access.

“The reason that the president is probably going to come out of the woods with this disease is because he has the best health care in the world. And many, way too many Americans either have no health care or subpar health care. They are not getting what Donald Trump is getting,” said Halkitis.

He also suggests that public health authorities, get creative on social media platforms to get the right messages out, and to consider using whatever precious few dollars they may have in their budgets on grassroots campaigns in communities hesitant to embrace mainstream health messages.

“You identify individuals in the communities, whatever community it is. You define it very, very specifically that are the pure leaders, that sort of set the tone and you engage those people and you have to first convince those people about how to message about COVID-19. And then those people become the ambassadors,” said Halkitis. “Number two, I think we also just continue to engage in context where people go, like the bodegas, and the supermarkets. Like we can't just expect people to go to the CDC Web site. We need to go to where people are and message to them with these ambassadors at our side.”

In a letter to The Lancet journal, one public health expert Jane Galvão suggests that a more “vigorous and innovative” approach should be taken to confront misinformation coming from public figures, going as far as to questions whether there are legal actions that can be taken against those that insist the pandemic is a hoax or not as bad as it may seem.

Dr. Bassett suggests there is one thing people can do now: Change the channel on President Trump.

“This is the Trump show and we all have the remote. It's called voting. And, as a public health expert, this is getting out of my lane,” said Bassett. “But I think that we all have to recognize that the strategy of this administration has given COVID-19 an open highway and we all need to get out of our lane. So use the remote, register and vote.”