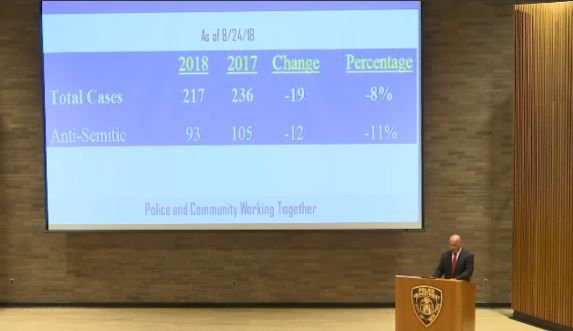 This year, Rosh Hashanah and Yom Kippur take place during the month of September.

In preparation, the NYPD held its High Holy Days Briefing at Police Headquarters on Tuesday.

"The Jewish community of New York City approaches this high holiday season with great hope and confidence," said Rabbi Alvin Kass, who spoke to the crowd gathered for the meeting.

Kass said that his confidence is a product of the NYPD's hard work in keeping the Jewish community safe.

At the meeting, NYPD officials announced that all hate crimes are down 8 percent so far this year.

They added that hate crimes directed against Jewish people are also down 11 percent.

They said that community involvement has been crucial in bringing the numbers down.

"There's a partnership between the NYPD and the community. I need you, we need you, to keep supporting the NYPD the way you are," said Deputy Inspector Mark Molinari of the NYPD’s Hate Crimes Task Force.

At the meeting, community leaders were given the opportunity to address any of their safety concerns directly with Police Commissioner James O'Neill.

"We're looking to do the best we can not only to feel safe as I said before, but to be safe," the commissioner told the crowd.

It's an effort that's in line with the NYPD's Neighborhood Policing model, which seeks to build ties between police and the communities they protect.

Officials at the briefing also urged attendees to reach out to their Neighborhood Coordination Officers or NCOs.

"I encourage you please make it a point to introduce yourself and get to know them and even invite them to your house of worship," said Nilda Hofmann, the chief of NYPD Community Affairs.

Officials said they hope that by nurturing these kinds of relationships it will be easier to protect city residents all year long.