Liz Caruso of Caratunk speaks with supporters in May at an ice cream social in Waterville while campaigning in the GOP primary for Maine’s 2nd Congressional District. (Photo by Susan Cover/Spectrum News Maine)

A homeschool mom and leading opponent of the Central Maine Power corridor is challenging former two-term Rep. Bruce Poliquin in the Republican primary for the 2nd Congressional District.

Liz Caruso, 52, of Caratunk told supporters at a recent ice cream social in Waterville that she’s running for several reasons, including her belief that the 1st and 2nd Amendments to the Constitution are under attack, that child sex trafficking isn’t being adequately addressed, and that the government shouldn’t have the power to mandate medical decisions such as COVID-19 vaccinations.

On Tuesday, June 14, she’ll face Poliquin, 68, a former businessman, state treasurer and member of Congress from 2015 to 2019. He lost in a narrow election in 2018 to current Democratic U.S. Rep. Jared Golden in a race that also featured two independent candidates and was decided by ranked choice voting.

Poliquin has raised about $2 million so far, with Caruso reporting $25,685, according to reports on file with the Federal Election Commission. Caruso said she has no paid staff and that she’s emphasizing a grassroots campaign supported by volunteers. 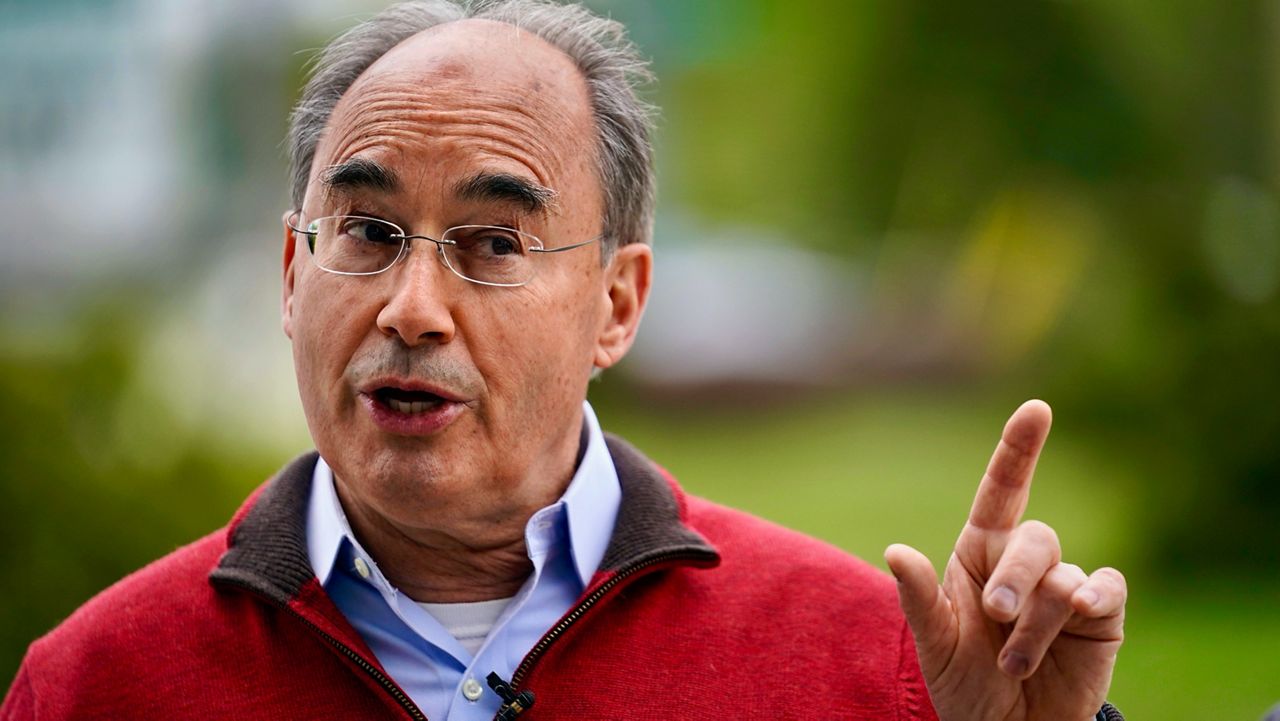 Bruce Poliquin is running to reclaim his 2nd District Congressional seat. First, he has to defat Liz Caruso. (Photo By The Associated Press)

In an interview with Spectrum News Maine, Caruso emphasized the need to secure the U.S. southern border and said the country has failed in areas such as energy production.

“Our nation is definitely teetering at a time right now where people have to stand for freedom against tyranny, freedom for their values and the Constitution,” she said. “Rural Maine is part of a broader movement across our nation where citizens are disregarding politics the way it has been practiced.”

Poliquin also painted a bleak picture of the country, saying that rampant federal spending, restrictions on domestic energy production and lax border protections are creating problems for Mainers across the state.

“The country’s in trouble, the state’s in trouble,” he said during lunch at the Ninety Nine Restaurant in Augusta. “I’ve come out of semi-retirement to do this, to help.”

Poliquin said Democrats in Washington have made spending decisions that have driven up inflation to 40-year highs and that the country is close to slipping into a recession. A Waterville native who recently purchased a home in Orrington, Poliquin said the federal government needs to tighten security at the southern border to stem the flow of deadly fentanyl into the country and into Maine, where it is killing record numbers of people.

In addition, he said the U.S. doesn’t have the capacity to take care of large numbers of immigrants and should instead focus on “our citizens first.”

With about a dozen supporters at the Waterville Elks Lodge, Caruso described her background as a registered Maine Guide, co-owner of an outdoor adventure company and founder of The Forks Chamber of Commerce. She has a degree in engineering and a master’s degree in business administration.

A 15-year select board member in Caratunk, she got a taste of state politics with frequent trips to Augusta and elsewhere as part of the town’s opposition to the western Maine power corridor. She said it didn’t take long to realize that “it really is a good old boys club run by special interest groups.”

She is anti-abortion and homeschools her two sons, one of whom is headed to college in the fall. She said she is running for Congress because someone asked her to and that she is not looking for a career in politics.

Caruso describes herself as “pro-woman” and during the Republican State Convention in April, addressed the crowd to speak in favor of amending the party platform to support language that defines “as child sexual abuse in public schools, the teaching or promotion of biological genders other than those of male and female homo sapiens.”

“I think the attacks on the female sex is unreal,” she said to the Waterville group in May. “We need to keep our women safe, whether it’s in bathrooms, girls’ sports, prison cells. We need to have someone protect them.”

When an audience member asked her who she would align herself with in Washington, she named Rep. Jim Jordan of Ohio and Rep. Josh Hawley of Missouri.

Poliquin hit the Maine political scene in 2010 when he ran in a seven-way GOP primary for governor. He finished sixth out of seven contenders, but the winner of the primary and general election, former Gov. Paul LePage, picked him as his nominee for state treasurer. With the blessing of the Republican controlled House and Senate, Poliquin served as treasurer for two years before Democrats took back power in the Legislature and installed their own treasurer.

Two years later, Poliquin defeated Democratic Sen. Emily Cain to win election to Congress. In 2016, he beat Cain again to win re-election. By 2018, Mainers had voted by citizen initiative to begin using ranked-choice voting, which applies to federal elections. It allows voters to rank candidates in order of preference and in the four-way race, it took two rounds of vote counting for Golden to get over the 50% threshold to win.

Poliquin contested the results and sued the state, arguing that the ranked choice system violates the U.S. Constitution. Ultimately, a judge struck down his challenge and he conceded to Golden.

This November, Poliquin predicts a Republican wave, saying that voters will be facing even higher gas and heating oil prices by the fall. He said he and other Republicans will immediately stop what he described as “off budget spending,” which includes the payments sent out by the federal government at the height of the pandemic."We have spent roughly in a year and a half to two years, $5 trillion more than is needed to fund the government,” he said. “We don’t have that money. That money is printed or it is borrowed. And that drives up inflation.”

Like Caruso, Poliquin is anti-abortion. He said if the Supreme Court overturns Roe v. Wade and sends the issue back to the states, it would be similar to the way states handle capital punishment — with a patchwork of laws suitable to the residents of that state.

When it comes to energy production, he said Congress should push the administration to pursue all forms of energy, including renewables and those that emit carbon.

“I can make the lives better for the people of Maine by making sure we work hard to allow the exploration and development of more gasoline, diesel and heating oil to drive down the price,” he said. “We were energy independent two years ago, we’re not now.”

The winner of the primary between Caruso and Poliquin will face Golden and independent Tiffany Bond on the Nov. 8 ballot.