Members of the Milwaukee Children's Choir rehearse during an outdoor retreat. (Photo courtesy of Kelly Schlicht)

Safer Singing: How Can We Make Music During The Pandemic?

MILWAUKEE (SPECTRUM NEWS) — Over the course of the COVID-19 pandemic, Jonathan Bock has been getting a lot of questions about how people can make music safely as the threat of the virus looms.

Bock has a professional interest in the subject as an ear, nose, and throat surgeon at Froedtert Hospital. But for him, the matter is also personal: He’s a lifelong musician himself who spends his free time playing in a band. And when that band got together for a socially distanced rehearsal after four months apart, he says he felt firsthand the power of music as “the world’s best antidepressant.”

“The first night that we got together and actually played music together again, we all just felt so much better — mentally, spiritually, even physically,” Bock says. “People that are musical performers, you know, it's in your blood. It's something that gives you kind of a dopamine fix to make music together.”

Choirs, bands, and other music groups have struggled to strike the right chord in the midst of the COVID-19 pandemic. In-person gatherings of any kind have become risky, and research suggests that singing expels a lot of the droplets and aerosols that may help the coronavirus spread. A choir practice in Washington that infected more than 50 members became one of the early “superspreader” events documented back in March.

But Bock says he wasn’t satisfied with other guidelines that were saying, basically, to shut down all of these activities until the pandemic ends.

“It's easy to make kind of a broad, slashing statement like that,” Bock says. “It's a lot harder to actually think about, OK, what do we know, what don't we know about this issue? And what are some recommendations that we can make to actually allow schools and people to start performing again?” 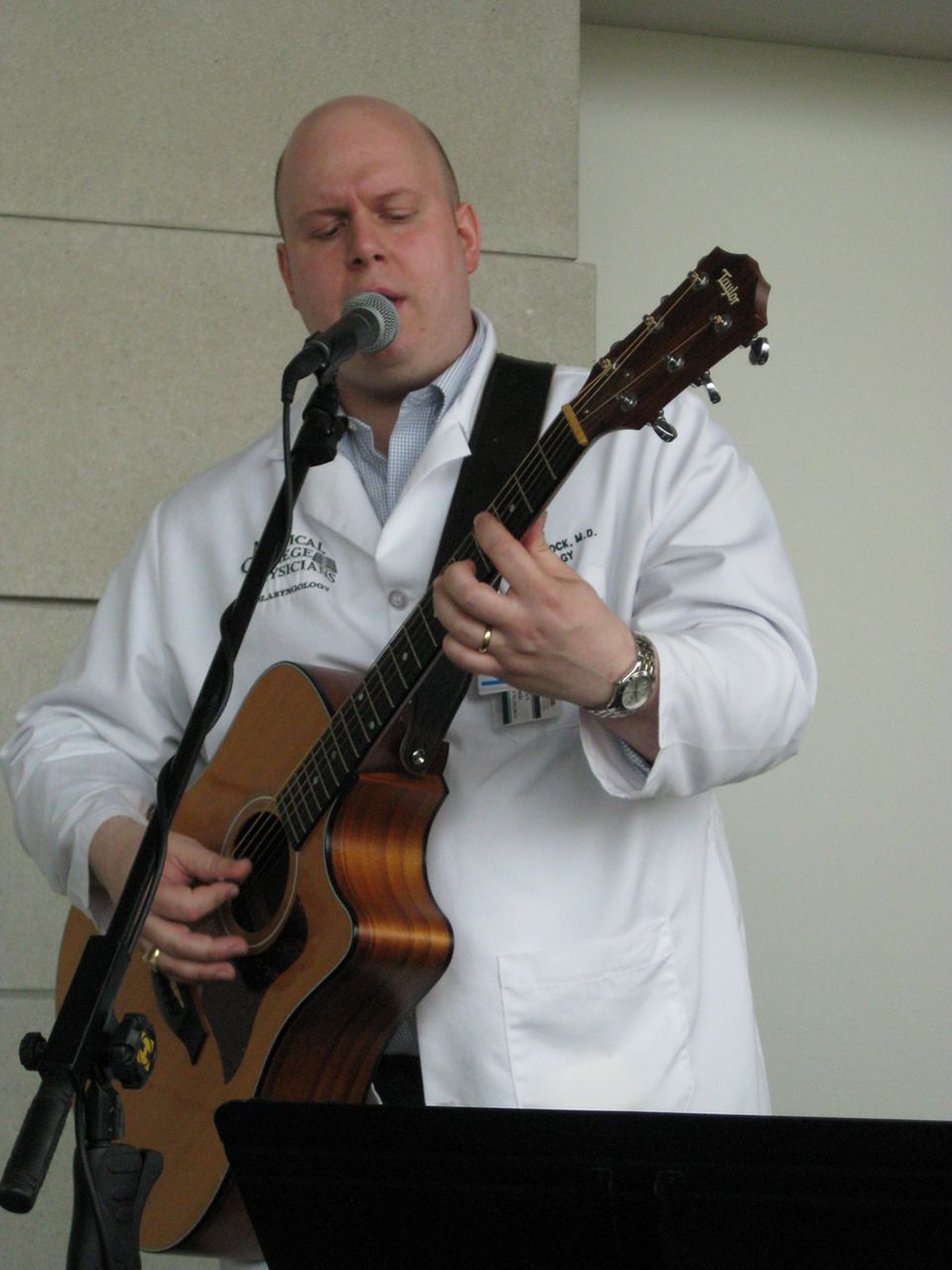 Jonathan Bock (Photo courtesy of the Medical College of Wisconsin)

Locally, while some music groups remain on hold, others have started to resume rehearsals — trying, much like schools, businesses, and other institutions, to keep members safe while bringing back some level of activity. To help groups navigate ways to reduce risk, Bock and other experts published a paper this summer in the Journal of Voice, assessing the evidence and making recommendations for “Safer Singing During the SARS-CoV-2 Pandemic.”

When thinking about how risky an activity is, the paper’s authors break down risk on two measures: the amount of viral load, and the stretch of exposure time.

Some activities, like congregational singing or musical theater rehearsals, would traditionally rank high on both of these, because they involve large groups together for long periods of time. Reducing both the size of groups practicing together and the length of rehearsals can help bring this risk down, the authors write.

To cut down on in-person gatherings, the Milwaukee Children’s Choir recently kicked off its season with a hybrid model that incorporates online sessions and modified small-group rehearsals, says executive director Bill Busch. He says his team was really hoping to have some sort of season in the fall, especially knowing that a lot of school music programs would be reduced.

“When we looked at the season, we said, ‘What can we do to be safe and to make our families feel comfortable and secure?’” Busch says.

Based on scientific research and feedback from their members’ families, he says they picked the hybrid model over other all-online or all-in-person scenarios they’d developed. Students alternate weeks of small-group rehearsals with social distancing measures and online sessions.

The virtual sessions are useful for teaching music theory and can open up some new opportunities, Busch says — for example, they’ll be hosting some online master classes with choral composers this season. But actually rehearsing over video platforms is tough to sync up, he points out.

At the Milwaukee Opera Theatre, they’ve also made an effort to cut down on in-person interactions, says artistic director Jill Anna Ponasik.

She says the team has been closely following scientific research to adapt their plans. As more information has come out about, for example, the possibility of aerosol transmission of the virus, she says they’ve had to keep changing their own measures and now have their performers mainly rehearsing solo pieces in their own spaces.

Eventually, they just “scrapped everything” they had planned for the current season and turned to some new distance-friendly projects, including a virtual opera show with other companies across the country and an outdoor production with Danceworks that will premiere along the Milwaukee River. Ponasik says they found it easier to try to think up completely new works for the moment than to try to adapt old pieces for these unprecedented times.

“If our goal is to provide people with singing, and to find ways for it to be safe, and to create some pathway for an audience to connect to artmaking and have an aesthetic experience, let's just start fresh and make something for this world,” Ponasik says. “Because all of those pieces were written for that other world that feels really far away right now.”

In addition to purely restricting the number of people or amount of time in rehearsal, Bock says wearing masks and otherwise trying to cut down on particle transmission can make a big difference.

He says his children’s school choir has encouraged humming during rehearsal rather than singing with mouths open — though he says he was surprised to learn in his research that singing in a quiet, breathy tone might actually make more aerosols as more air passes through the vocal cords. Ventilation also plays a big role, Bock adds, and even though some unclear guidance remains about aerosol spread, he says groups should think about air turnover in their rehearsal spaces. 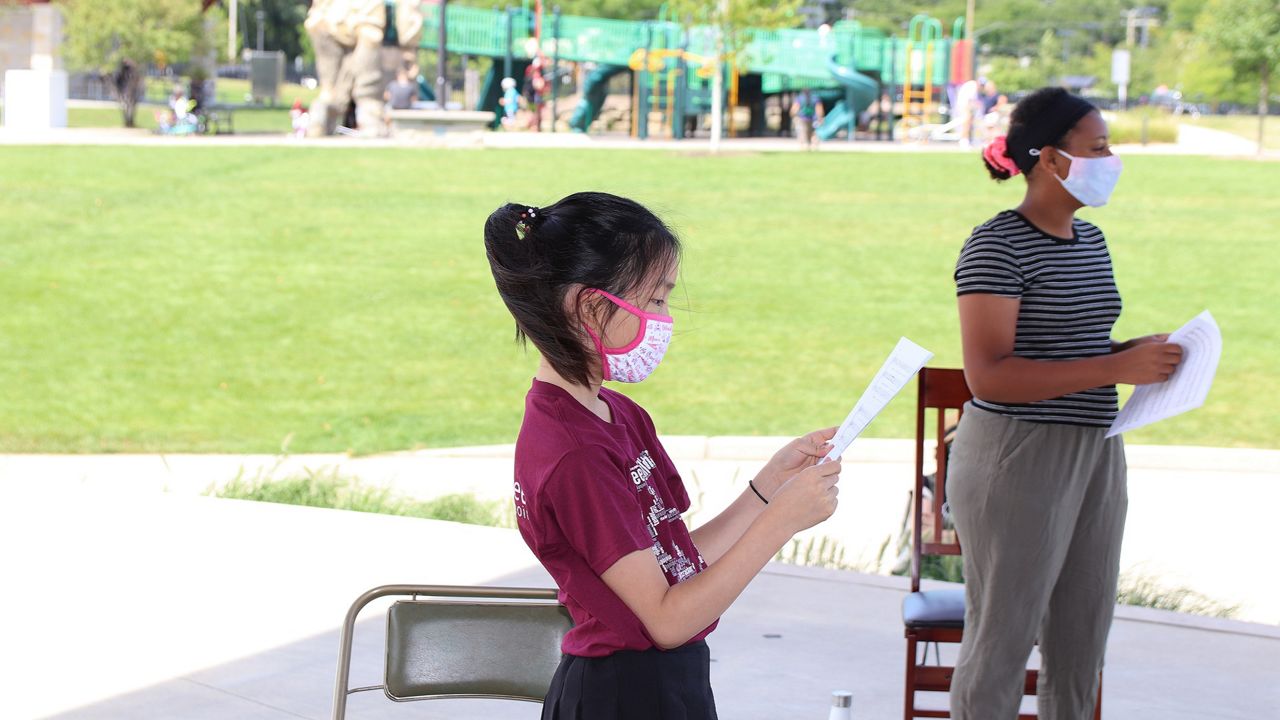 For their limited in-person rehearsals, Busch says the children’s choir is requiring all members to wear masks, and only spending a maximum of 45 minutes in a room before leaving to let air recirculate. The group also chose to move their fall retreat outdoors to allow for more airflow.

In the end, Bock says many of the researchers’ recommendations have a lot in common with other reopening guidelines: Keeping distance between group members, sanitizing equipment, screening for symptoms. He emphasizes that best practices are still “an active area of discussion,” and that people need to think about their own risk when deciding whether to participate — especially if they are immunocompromised or part of another vulnerable group.

“The main thing that we wanted to get across was that, yes, people need to be careful, but that there are ways to do this that can be safe,” Bock says. “There's never going to be a risk-free scenario here. But that people should be able to find a way hopefully, to be smart about how they're proceeding.”

Despite the challenges, Busch says he’s excited about the upcoming season with the children’s choir. Registration is “definitely down,” he says, and they’re hoping more students will enroll. But those who are back for the fall have been really excited to be creating together again, something he says is more important than ever during this isolating time.

Ponasik adds that while it’s been exciting to experiment and adapt to this moment, she’s “incredibly eager” to return to live work — and hopes that people can work together to curb the virus’ spread and make that return possible.

“Everything we're doing, we're excited about it. But it's really all this attempt to help people hang in there until we get through the pandemic,” Ponasik says. “So I hope that they are able to connect and feel refreshed, and able to use their talent in a way that feels right and good. So that they can feel like themselves again.”

For his part, Bock says he has a lot of empathy for all the performers trying to make a living, and anyone else who misses the feeling of enjoying music together.

“If that all just stopped cold turkey, a lot of the flavor of what makes humanity enjoyable would be hugely impacted,” Bock says. “If we weren't able to produce music together, to make chords together or sing together, our human experience would become more bland for sure. It’s part of the depth and character of what we all experience.”