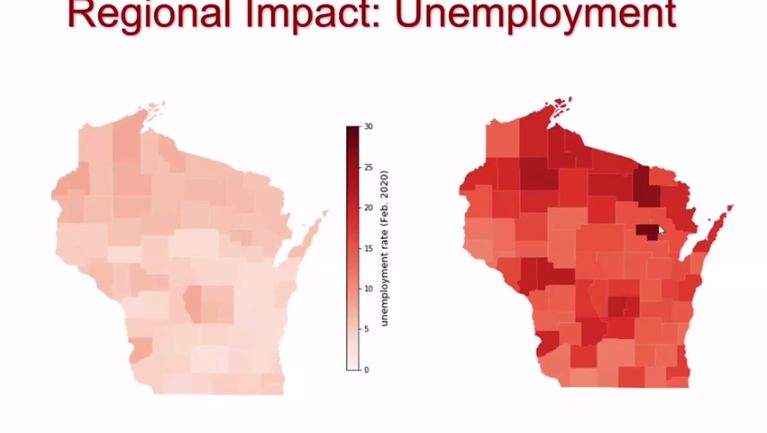 How Coronavirus Has Affected Wisconsin's Economy

WISCONSIN (SPECTRUM NEWS) - The Center for Research on the Wisconsin Economy has been digging into the data of how COVID-19 has affected Wisconsin. The group is run out of UW Madison.

CROWE has concluded that after a historically low unemployment rate in 2019, Wisconsin is now at more than 19%. That is a historic high. Closed small businesses are projected to survive only two months if current restrictions continue. In Wisconsin, those businesses that employ hourly workers make up 40% of the sector.

"40% of businesses and roughly 50 to 55% of workers," says CROWE Director Noah Williams. "Hourly workers who had been working in January are now not working at all."

Williams pinpointed Menominee County. It is Wisconsin's poorest county and has been hit particularly hard during the COVID-19 pandemic, with regards to unemployment. It currently has a 25% unemployment rate.

"This county again started off the poorest," Williams says. "Average incomes are about 40% below the statewide average in this county and the poverty rate is 26%."

In contrast, grocery store sales have skyrocketed. In mid-March, they increased by 80% to 100% over the same time frame in 2019. They have sustained an increase of 30% since then. Online retail is up 20%. Wisconsin also approved $8.3 billion in loans through the Paycheck Protection Program.

Williams adds that the nation's recovery will largely depend on consumer response, once restrictions have lifted.

"Restaurants may open tomorrow, but if they do open, they’re likely to have mandated substantial reductions in capacity and it’s unclear how many people will want to show up anyway," Williams says.

Air traffic and hotel visits have taken the biggest economic hit. They have seen a 95% decline and an 85% decline, respectively.