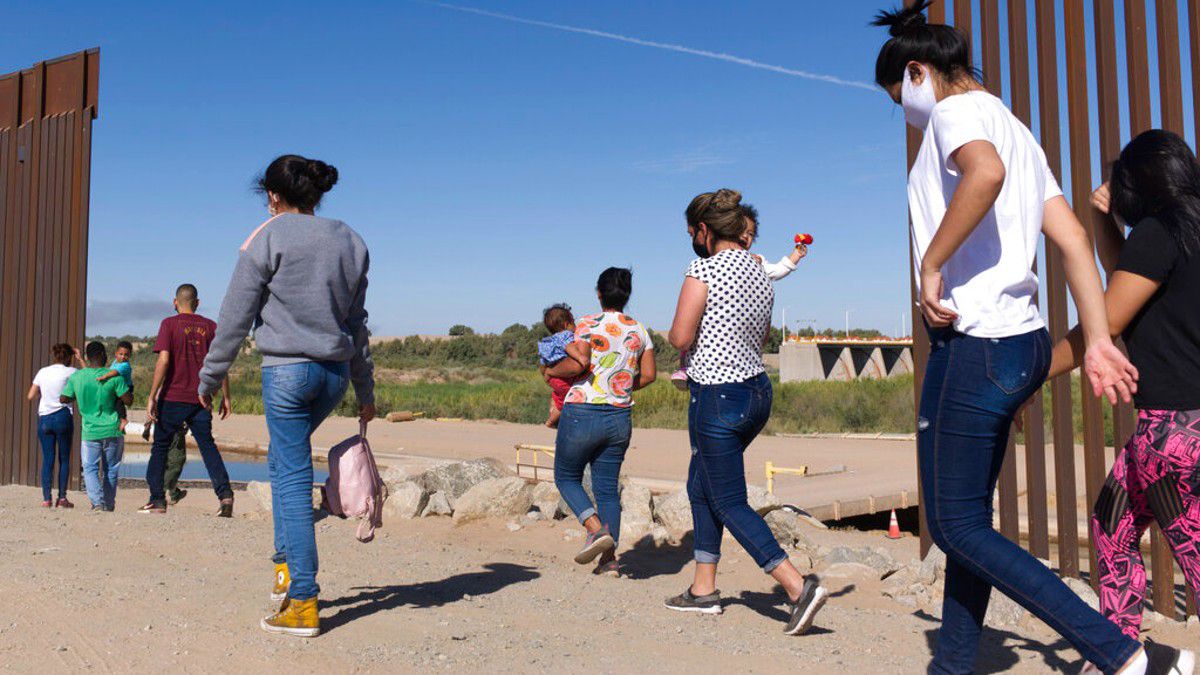 Some Democrats have joined Republicans in opposing a Biden administration plan to end "Title 42" immigration restrictions next month. (Photo by The Associated Press)

Several Democrats, including Golden, side with Republicans to keep border restrictions

In Washington, at least five House Democrats, including Maine 2nd District Rep. Jared Golden, have joined some Republicans in urging President Joe Biden to maintain a Trump-era policy that allows the government to expel undocumented immigrants at the border because of the pandemic.

“Title 42 is a CDC policy that allowed border officials to expel people, either to Mexico or to their home countries, without any of the normal trappings of the deportation process,” said Aaron Reichlin-Melnick, Senior Policy Counsel at the American Immigration Council.

Those opposed to rescinding “Title 42” have said that the government should have a plan to handle the influx of immigrants that some expect will show up at the border when the policy ends. One bill being proposed would prohibit the Biden administration from ending Title 42 restrictions until 60 days after formally ending the COVID-19 public health emergency declaration. The legislation also states that within 30 days of ending the public health emergency, the President must submit a plan to process the migrant surge to Congress.

“By simply doing away with Title 42, this Administration is pulling the rug out from under our Border Patrol agents and the communities they work to protect,” said Rep. Tony Gonzales (R-Texas), one lawmaker supporting the proposal. His reaction is just one of many that have become public since the Biden administration announced its plans last week.

“I think it’s clear what we’re seeing from Republicans is an effort to politicize this and not fix what we all recognize is an outdated and broken system,” said White House Press Secretary Jen Psaki during a briefing on Monday.

Three of the five Democrats who have joined with Republicans in sponsoring legislation to block the administration from lifting the immigration restrictions include Golden, Chris Pappas of New Hampshire and Stephanie Murphy from Florida. All represent districts that Republicans hope to capture in this year’s election.

“The Biden administration is not currently prepared for a large increase in border crossings,” said Golden (D-Maine). “Ending these Title 42 authorities without a plan in place to manage the resulting influx of migrants is irresponsible and could create crisis conditions that would be dangerous for both migrants coming to America and Americans themselves. Title 42 cannot remain in place permanently, but President Biden must ensure that DHS and its personnel, facilities, and processes are ready before rolling it back. This bipartisan legislation would ensure he does so.”

The Trump administration enacted the restrictions in March 2020 when the pandemic erupted.

“(The policy) said that for public health reasons they were going to turn back most people who tried to enter from Mexico into the United States, if they did not already have a valid visa like a tourist visa,” said Stephen Yale-Loehr, a professor of immigration law at Cornell University.

Some immigration advocates and lawmakers, including Rep. Cori Bush (D-Mo.) and Rep. Ayanna Pressley (D-Mass.) have called Title 42 restrictions “racist” and lauded the Biden administration for deciding to end the policy on May 23.

“Right now, Customs and Border Protection is exempting nearly 800 Ukrainians a day from Title 42, saying that they don’t need to be excluded by this public health authority. But, the Biden administration has expelled more than 10,000 Haitians back to a country that they themselves say is too dangerous to deport people to. The way it has been carried out has disproportionately affected certain nationalities,” said Reichlin-Melnick.

When President Joe Biden took office, some Democrats expected him to end the policy, but the administration waited more than a year before making the move.

Some Republicans, who have been hammering at Democrats on conditions at the border, have said that lifting the policy would be a big mistake and warned the decision would cause many more undocumented immigrants to stream into the U.S.

“The problem is the Title 42 itself is causing an increase at crossings and the reality is, at some point, you’re going to have to rip off this bandage. There’s never going to be a perfect moment to lift Title 42," added Reichlin-Melnick.

U.S. Customs and Border protection officials have reported that there were over 1.7 million attempts to enter the U.S. since “Title 42” was enacted.

“Title 42 is sort of like a garden hose that has been bottled up. All the people that would normally come in at regular flows over the years have been sort of stymied and held up at the border. And of course, if they lift Title 42, that surge now is going to be coming across the border and temporarily could pose problems for the Border Patrol,” said Yale-Loehr.

“Public health and public safety, not politics, should drive the federal government’s decision on when to end Title 42,” said Congresswoman Murphy. “As an immigrant and refugee who empathizes with individuals and families seeking protection in America from persecution in their native country, I believe Title 42 should only be lifted once we have a comprehensive and properly resourced plan in place that treats asylum seekers with decency and humanity, protects our communities, is consistent with American values, and does not compromise our national security.”

The Biden administration has more than a month to shore up any staffing issues to ensure officials at the border are ready to deal with any influx. Some have said that’s not enough time to hire more people to get the job done.