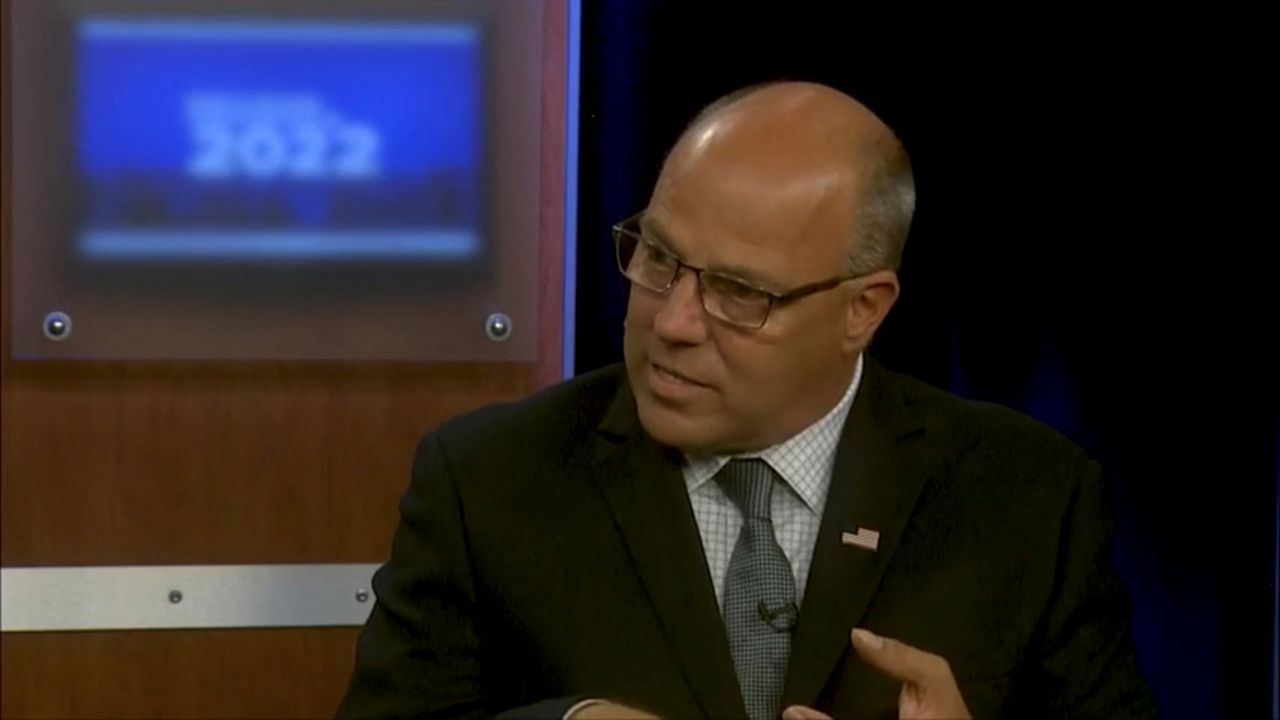 Jeffrey Sossa-Paquette sits down for interview ahead of Election Day

WORCESTER, Mass. - Republican Jeffrey Sossa-Paquette is running to represent the 2nd Massachusetts Congressional District in the House of Representatives this fall. He is challenging Rep. Jim McGovern (D-Worcester) (full interview here), who has served in Congress since 1997.

This week, Sossa-Paquette sat down with Spectrum News 1 to answer questions on topics that are important to voters ahead of the midterms. The following has been edited for length and clarity. The complete interview can be viewed in the video above.

Cam Jandrow: On your website, you said Washington needs leaders who have walked the walk of everyday citizens. Can you expand on what you mean by that?

Jeffrey Sossa-Paquette: "You know, I look at myself and to give a little history about myself, you know my dad went to jail when I was 16 unfortunately for abusing his children. He went to jail for 20 years. To move that ball forward, I had to leave school in eighth grade to be able to help my mother support my brothers and sisters. I went and started my first company at 23 years old, built it to a chain of seven pet stores, $7 million in sales, 112 employees. I sold that company when I was 29 years old, got my high school diploma when I was 29 after turning myself into a self-made millionaire. Then I went to college, Becker University here in Worcester. You know, you look at these different things, my son was born addicted to heroin. We had to go through all of what it meant to have his organs catch up with themselves for the first three years of his life. You know, I've seen a lot and I've walked in a lot of everyday people's lives. I've seen the top as far as my earning potential. I've seen the bottom, and everything in between, and I believe that all career politicians, whether it be republican or democrat, have truly forgotten what it means to represent all their citizens."

CJ: On the economy. the country experienced the largest increase in inflation in 40 years. Democrats supported the Inflation Reduction Act, the law includes a number of items. But as inflation is still high. Is it working? What would you do in the next Congress?

JSP: Do I think the Inflation Reduction Act is going to do anything to reduce inflation? Absolutely not. It's going to add to it. We're watching the numbers now causing that when we look at the interest rates and stuff that are happening. People's mortgages now are going up $800 to $1,000 just in the last seven months. So again, I look at the millennials and go, 'My god, you just got in a position that you can buy a house and we just gave you a pow in the cheeks again so to speak,' right? So, no. What do we need to do in D.C.? We need to stop spending. And then from there, what we need to do is go through every single agency and find the waste that's been in there for decades and pull it out and re-spend money where we're actually building American families, lifting our poverty, our people that are living in the social safety net."

CJ: Gas prices were already rising prior to Russian invasion of Ukraine. How dependent is the U.S. on foreign sources of energy?

JSP: Unfortunately, we're too dependent, and what I mean by that is American has all of its energy sources right here. We should not be producing any energy, whether it's green, or fossil, or nuclear anywhere but here in America. That would rebuild our middle-class. It would lift probably 40% of the families that are living in the poverty line up. It would bring the prices down."

CJ: Abortion services and access seem to be bringing many out to the polls this year following the Supreme Court’s opinion overturning Roe V. Wade this year. Massachusetts has added protections and laws in place, but Congress hasn’t codified abortion rights. Can elaborate on where you stand when it comes to legalized abortion?

JSP: One, and this is the best way I'm going to be able to say this. I am pro-life. I believe that adoption saves lives. Both my children, my daughter, an abortion was stopped three days before she was born. My son was born addicted to heroin. Same decisions. Both my children are here because we were able to stop late-term abortions. With that said, my personal belief is not how I should legislate. I have to legislate to what the constituents of the Massachusetts in district two want. And what do they want, 75% of them? Abortion, legal, safe, rare, and with limits. It's no different than what Congressman Jim McGovern said on his debate in 2018."

CJ: There's been many stories and controversies surrounding election results, the validity of 2020's presidential election, and even the process of voting by mail. Is there any concern about voters confidence in fair elections or maybe a burn out amongst the voters in Massachusetts?

JSP: I think that you know when we look at the elections, and what Congressman Jim McGovern did, let's take Russia. It was the biggest scam ever put on the American citizens. It has been proven over and over again, but yet they still beat that drum. Seven years we divided our country over Russia. We destroyed a sitting president's first three years. Regardless of about what you think Trump, these are just the facts of what they did. Then we get to the 2020 election during COVID. Were there irregularities across our country? There were. Have they been proven? No they haven't. Who's sitting in the White House is President Biden. Just like in 2016 when Congressman Jim McGovern wanted to deny the election in 2016 to President Trump, President Trump was our president in 2016."No different than Biden as our president in 2020."

Editor's Note: In the full interview above, Mr. Sossa-Paquette refers to polling numbers and contributions received by Rep. James McGovern. Spectrum News 1 hasn't been able to independently verify those statements.