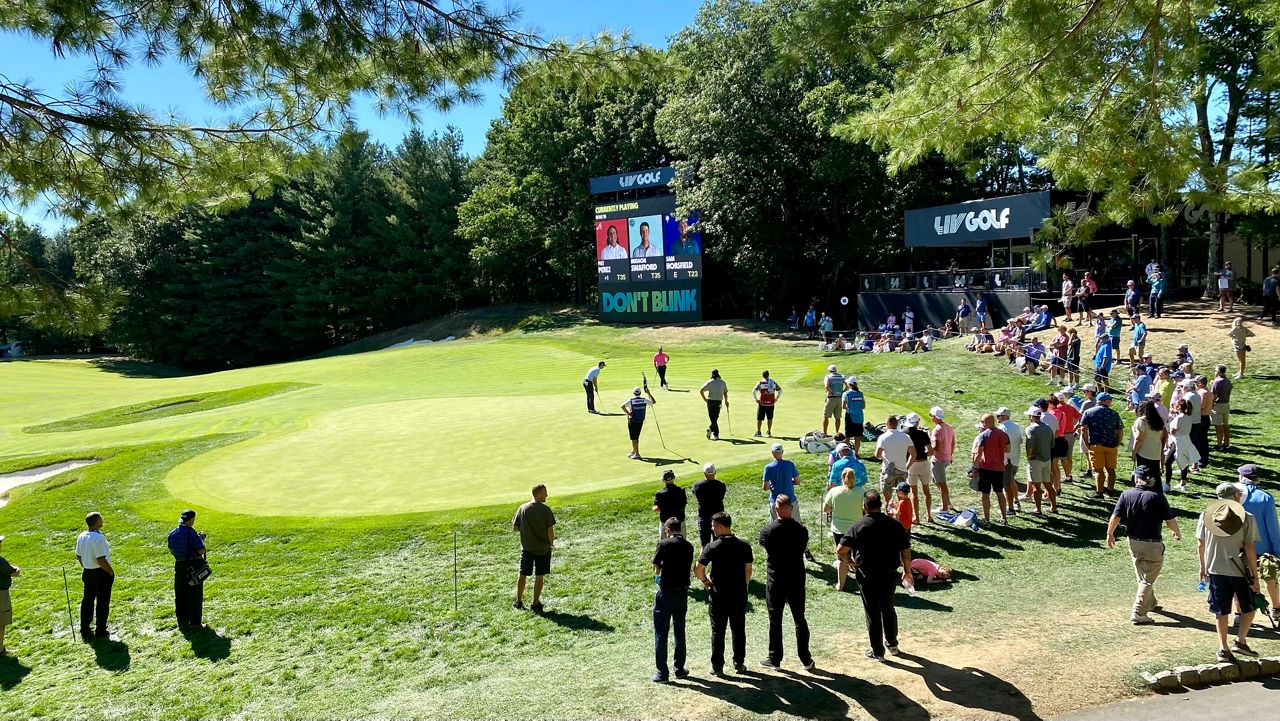 A view of one of the greens at The International in Bolton during the LIV Golf tournament Friday. (Spectrum News 1/Meghan Parsons)

Fans, protestors come to Bolton for first day of LIV Golf tournament at The International

BOLTON, Mass. - For most fans at The International in Bolton, it’s their first time at a LIV Golf tournament, and they say so far, so good.

"Listen, you need to come here,” said John Connolly, a local fan. “I got a first bump from Phil [Mickelson]."


Most people say curiosity brought them to the course, just to see how a LIV tournament stacks up against the PGA.

"I haven't seen one of these yet, a shot gun start, whole different format,” said spectator Anthony DiCesare. “I think it’s going to be pretty awesome."

The different rules and the less expensive tickets have some fans all in.

"It's non-stop, kind of like tennis, where you're looking back and forth,” said Matthew Connolly, another fan. “This made it really affordable to come in, meet some of these guys and get a really close aspect of what PGA kind of would be all about, but seems a little bit more lively."

This tournament also attracted protesters. LIV Golf is financially backed by Saudi Arabia, and the Massachusetts Peace Action League said their events should have no place here in the United States.

"This is very high profile, getting a lot of publicity,” said Paul Shannon of the Massachusetts Peace Action League. “We want to make sure that that publicity includes a view of what Saudi Arabia is, why it has so much money and the fact that we are working so closely with them on a number of different issues."

Demonstrators held signs with sayings like 'Saudi money is blood money' and 'Saudi Arabia kills.’ They praised golfers for staying with the PGA and doing what they say is the right thing.

"They’ve been offered a lot of money to come over to this tour to make Saudi Arabia look good,” Shannon said. “Not only have they refused, some have actually said we don't want to have anything to do with this regime in Saudi Arabia."

Most people at the tournament said they just came out to watch their favorite players and catch some good golf.

"No politics, no nothing,” said John Connoly. “I'm here, I’m having a great time. I’m here to see my boys, all the boys who made the switch, right on."

The tournament is bringing thousands of people to the small town of Bolton through the weekend. Town administrator Don Lowe said he understands the concerns some people have, but the town will welcome the people, the business and the unique opportunity to host a world class golf tournament.

Editors' note: An earlier version of this story included "the tournament is bringing 'hundreds' of people to the small town of Bolton through the weekend" when it should have been "thousands." The video above reflects the proper terminology.