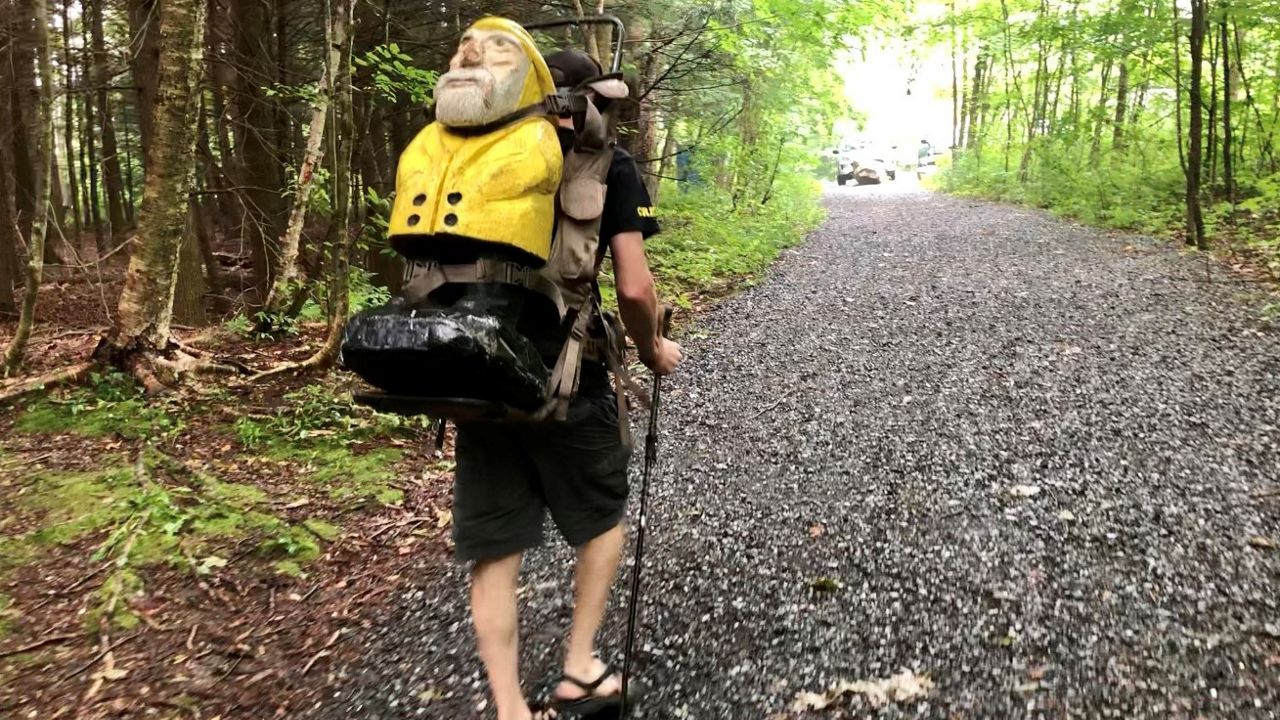 BERKSHIRE COUNTY, Mass. — On a rainy Monday morning at Greylock Glen in Adams, Geeg Wiles strapped in a 40-pound wooden statue of an old sea captain named Captain Ahab to his backpack for another walk through the woods.

“He’s been in my family since 1943,” said Wiles. “It’s an old military tradition, a prank to commandeer a lawn ornament, and then bring him back home when the tour was over. But as you can see, the prank turned into a family life hobby that is now my family carrying around Captain Ahab wherever we go.”

Over the decades, Wiles and his family have brought Ahab all over the world. Some of his adventures include visiting Bryce Canyon in Utah, whitewater rafting in Chile and this past February, climbing to the summit of Mount Kilimanjaro.

“We trained at Mount Greylock, went four or five times a week, but nothing could train you for the altitude and the isolation, honestly,” said Wiles of the Kilimanjaro trip, which he called his most difficult to date. “It was definitely eye-opening in that sense.”

Monday was a special day for Wiles and Ahab. It’s 20 years ago to the day since Ahab was officially passed down into his possession.

He marks each year by adding another line to the treasure map tattoo on the inside of his left forearm.

“Ahab’s not always with me every single place I go,” said Wiles. “But just in case I don’t bring him somewhere, or there’s some time where I’m not reminded physically of him, this is a reminder to always make excuses, to always commandeer life for me.”

The idea of commandeering life and not making excuses is the message Wiles hopes to spread by sharing all the things he’s been able see and do, all with some extra weight strapped to his back.

“Yes, it’s going to be a little tougher than it would be,” said Wiles. “It might not be the easiest task because of the weather, time constraints, money, whatever it is, but there’s always a way to do it and you’re never going to find the perfect day or perfect conditions. It’s more about just making sure you follow through.”