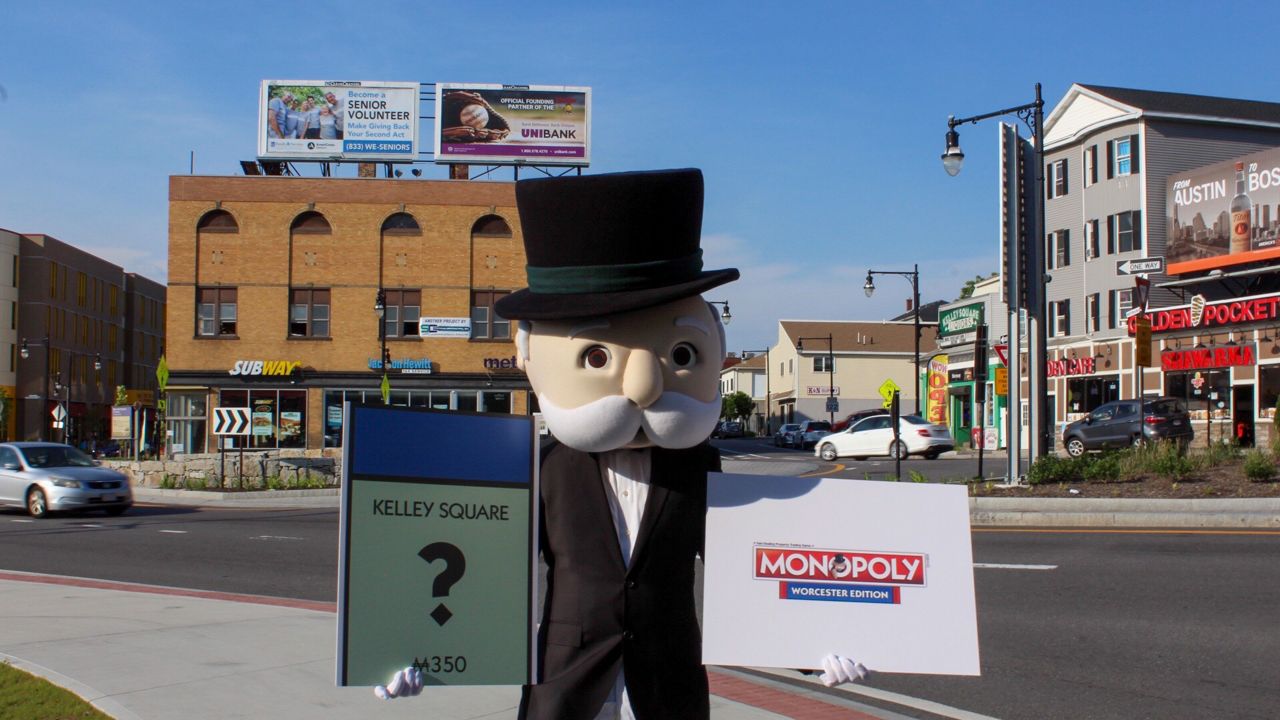 Claims of "pay to play" are being made ahead of Tuesday's official launch of the Worcester Monopoly board.

WORCESTER, Mass. - Just 24 hours before the Worcester Monopoly board is available to the public for purchase, claims of "pay to play" are clouding Tuesday's planned launch party at Union Station.

Scot Bove, owner of Ralph's Tavern on Shrewsbury Street, said businesses were asked to pay to secure a spot on the Monopoly: Worcester edition game board.

A source supports Bove’s claims and tells Spectrum News 1 that payments initially requested this spring by gamemaker Top Trumps USA from local businesses were between $20,000 and $60,000 over three years. The original asking price dropped significantly in the weeks after, the source said.

“Monopoly has always been known as a game the whole family can play – everyone can play Monopoly,” Bove said in a statement on Monday. “However, we have learned that the Worcester Monopoly edition was a pay to play situation – Monopoly did not give everyone the chance to play which seems very un-Monopoly.”

Top Trumps USA did not directly address questions about accepting payments to be included on the game board.

"We wish that we could include everything that makes Worcester unique on this game. With only 34 squares available, we rely on our local partners to help us put this board together and make it happen,” Top Trumps USA partnerships manager Afolabi Omotola said in a statement on Monday.

"There are varying levels of involvement and, in order to put these editions together around the globe, it’s important to get suggestions and support from the community. We asked those who know Worcester best to send us their feedback and received more than 60,000 recommendations earlier this year. From there, our team takes those suggestions and collaborates with organizations to make their squares come to life," Omotola added.

Omotola said the game board does include local landmarks, businesses, heritage and cultural centers and nonprofit organizations. The game board is being sold for $39.99 at local retailers and businesses, including CVS, Maria’s Fine Jewelry, the EcoTarium, Worcester Wares, Table Talk Pie Store, the Worcester Historical Museum, Hot Power Yoga, That’s Entertainment! and online at Amazon.com.

The public announcement that Top Trumps USA Inc. would be releasing a Monopoly Worcester edition was made in mid-June. Top Trumps accepted submissions and recommendations on what landmarks, businesses and other organizations should make it on the board.

However, Top Trumps USA Inc. had already secured payment from many of the businesses already on the board prior to their call for public input, according to a source.

"Top Trumps USA Inc. is unable to disclose the details of their partnerships as they’re under contract. Organizations were approached before and after the community was surveyed and suggestions were collected throughout a 2-week time period,” the company said in the statement. “No partnerships were confirmed until the community’s input was collected."

After finding out they would be left off the board, Ralph's Tavern announced a free Monopoly Demolition Day on Tuesday from 3 to 6 p.m. The Worcester Monopoly Edition launch party is scheduled for 11 a.m. at Union Station on Tuesday, when the company will announce the 34 businesses and local landmarks that received a spot on the game board.

City Manager Edward Augustus will be joined by Omotola and Top Trumps USA's vice president of sales, Scott Whitney, for the official launch.

In the statement, Omotola said Top Trumps USA doesn’t feature the use or sale of substances prohibited to minors including alcohol and tobacco.

Ralph's is encouraging customers to bring Monopoly boards and other memorabilia to be tossed into a wood chipper. The Worcester-based band “The Bubbleheads” will even debut a new song, “Monopoly Stinks”.

“Ralph’s Tavern and their patrons put a lot of time, energy, and money into supporting the Worcester Monopoly board. The patrons at Ralph's Tavern are very passionate and want to show their displeasure of Monopoly misrepresenting this promotion. We congratulate and support all of the non-profits and community organizations that made it onto the Worcester Monopoly board," Bove said.  "We reached out to Monopoly several times and had discussions on how we can work together. We wanted to support this venture, but Monopoly did not want to work together. "