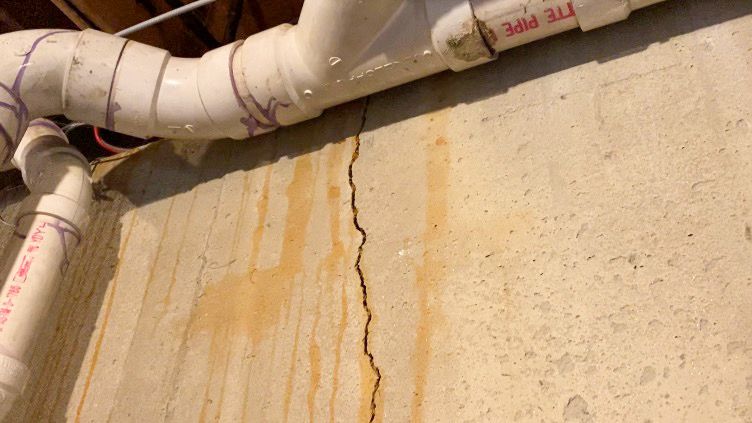 WALES, Mass.-  Heidi and Lee Hamer built their home in Wales in 1994, after purchasing the property the year before. Their intentions were to create a lifetime of memories inside.

"It's almost tear jerking [kind of], because you figure you'll pass it down to your family, my daughter, but, it's hard," Lee said.

Because of the mineral pyrrhotite in the concrete used to build their home, their foundation is crumbling, causing their home's value to drop by an estimated 60% of what it could be.

"We have water coming in one of the walls. The cracks are getting larger. We have bowing on one wall. One of our doors won't open and our house has been devalued down to [$130,000] I believe," Heidi Hamer said.

The materials used to pour the foundation came from a nearby quarry which is no longer operated by the same business, but the problem lingers in homes in their neighborhood and in neighboring Connecticut.

Mike Milanese lives a few roads over from the Hamers. His home has also been impacted.

"It wasn't until 2015 or so, we started noticing cracking in the walls, most of the walls were covered," said Milanese. "This wall was not and that is where we started seeing it."

Homeowners insurance does not cover the cost of repair. The only way to fix a foundation is to replace it.

"It's typically $200,000 to raise a house up and pour new foundation under it and that is pretty much another mortgage," Milanese explained.

"I look at it like a natural disaster. If a tornado came through, we would be there to help people," said Gobi. "This is happening at no fault of their own, didn't even know this could happen and we need to be there to help."

The legislation is in the early stages. Senator Gobi came and visited some of the affected homes on Tuesday afternoon with State Representative Brian Ashe and Congressman Richard Neal, as they look for assistance not just from the state, but at the federal level, as well.

Lawmakers said they are looking at Connecticut which passed a law to help homeowners with their foundation issues. The homeowners in Wales said they home help comes soon.

"The rest of the house is pretty nice. I would hate to lose it over bad foundation," said Milanese.

"We love our home. We don't want to leave. We want to stay here," Heidi Hamer said. "We are hoping for assistance and to get the word out so other people don't go through this."

Gobi said she has gotten calls from people in Central Massachusetts outside of Worcester who are concerned they could be having the same problem. So they will be looking at all the quarries in the area to explore this issue further.

Gobi and Ashe said they have been able to help get funds for some reimbursement for testing, but the bill, if passed, would expand that. They are also working with insurance companies to look into possible options to help those affected.

This problem could be impacting hundreds, if not thousands, of homes and if homeowners have an issue they should call a home inspector.