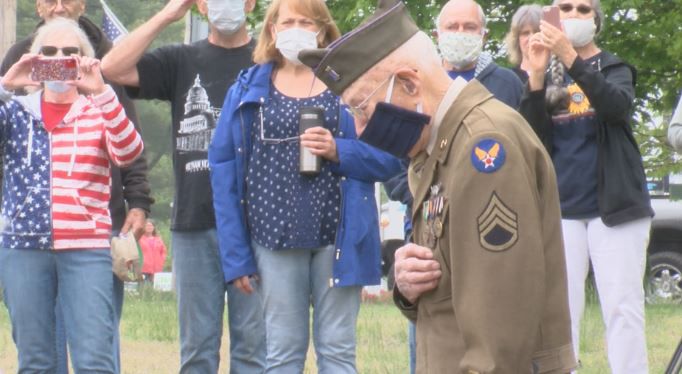 A tremendous show of support for West Brookfield’s Everett Allen. The 99-year-old World War II veteran planned on sitting in his driveway in uniform to wave to people in place of the town’s annual Memorial Day parade. When word got around he was going to do this, a parade led by first responders was formed to show their appreciation for Allen.

Allen said, “ it’s wonderful, but I certainly didn’t expect anything like this.”

Everett Allen enlisted in 1942 and was assigned to a bomber group in the 8th Army Air Force. He was taken prisoner by the Germans when his plane was shot down and spent about a year in a prison camp.

“And then 85 days we were forced to march 380 miles across northern Germany before we got liberated.”

Allen has been to all but one of West Brookfield's Memorial Day parades since 1946. The coronavirus pandemic changed the towns plans this year, but Allen and others still paid respects to veterans at each of the town cemeteries.

Selectman Daniel Bigda called the day a big success. “Everybody kept their social distancing and check and so forth and I think it went off great.”

And Allen’s neighbor Brian Doe said, “We went from no parade to the biggest parade we’ve ever seen.”

The town calls Allen a hero, but he wants them to remember all the other men and women who served.

“I’m just another one of those guys, one of the millions, thousands. It’s just the fact that I’m still around.”